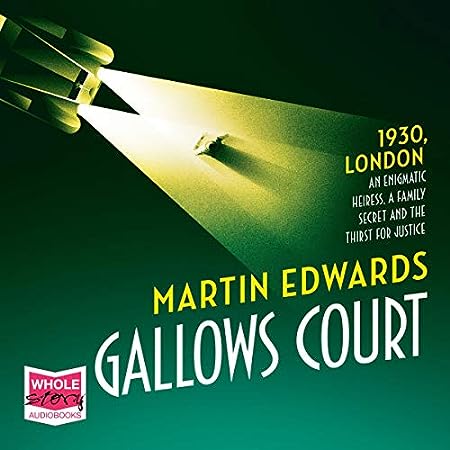 Festive Tasks, Door 9 – Cycles: Read a book that has something lucky on the cover or in the title; or that has a cover that is more than 50% red, yellow or green, which are considered lucky colors in China.

Gallows Court was a book I’d been curious about since it was published a few years ago. I suppose given that Martin Edwards is the go-to person at the center of the Golden Age mystery revival it was only a matter of time until he’d write a pastiche of the subgenre himself (or even several at this point) — and as I don’t usually do all that well with pastiches, that was my chief concern and the reason why it took me three years, after all, to finally get around to reading it. Well, I needn’t have worried.

This is very obviously a tribute to the great masters of the era, who aren’t merely name-checked: there are also plenty of allusions to their works, from names to plot elements, characters and settings such as codes, a theatrical actor manager and the revue show he produces, an isolated island owned by a “hanging” judge, and a campaign to right unpunished wrongs; yet, Edwards forges all of these elements into a coherent new whole, while still faithfully representing the London (and by extension, England) of the interwar years. But if you expect this book to hearken back to Agatha Christie and Dorothy L. Sayers principally you will be disappointed: there is more here of Arhtur Morrison’s Tales of Mean Streets, the serial killers found in the the novels of Francis Beeding, also a bit of a stylistically anachronistic whiff of Julian Symons’s novels (including, just possibly, the apprentice tabloid journalist of Symons’s The Progress of a Crime, which was one of the many Golden and Silver Age novels for which Edwards wrote an introduction upon its republication as part of the British Library Crime Classics series) — and like in one of Edwards’s personal favorites, Henry Wade’s Lonely Magdalen, even Scotland Yard manifestly has its dark side and its rotten apples.

Along the same lines and perhaps most notably, not only is there no suggestion that the amateur sleuth(s) at the center of this novel do not condone vigilante justice — we’re manifestly not dealing with the likes of Sherlock Holmes, Hercule Poirot, Miss Marple, Lord Peter Wimsey and their ilk here –; even some of the police officers we meet, much like J.J. Connington’s Sir Clinton Driffield (a Chief Constable, no less) are perfectly willing to let due course of the law take a back seat if it means vicious criminals get their just deserts. Martin Edwards does not tire to point out, on every suitable occasion, that the world of Golden Age mystery fiction was anything but reduced the cozy countryside world of The Guilty Vicarage (as W.H. Austen once called it in an essay); and at times it almost seems like he wrote this novel just to prove that very point. I could have wished that he hadn’t chosen to illustrate his point by having recourse the same underlying sordid topic that every other modern author writing Golden Age mystery pastiches seems to be drawn to as well; and if there is anything that doesn’t seem to gel quite as easily with his chosen setting, it is just this, because I doubt that even after the mystery had been solved, this particular topic would have been addressed quite as forthrightly as it is done here, But this ultimately comes down to the niceties of conversation; it is not, after all, as if these things hadn’t happened a century ago as much as they are still happening today (and they probably did so with much greater impunity back then, just because this was not a topic seen fit for polite conversation … and hence, brushed under the carpet and effectively treated as nonexistent.)

The plotting is a clever mix between “standard” mystery and “inverted” crime story, bringing together the hunt for a larger truth which, initially, the reader knows as little as the junior reporter from whose perspective the bulk of the story is narrated, with elements of a “inverted” mystery; i.e., one in which we know from the outset what has happened or is going to happen — what matters with regard to these latter elements is how they fit into the whole structure, which in turn is something that the reader (and our journalistic stand-in) is only destined to learn at the very end. Structurally, and also in the way the novel constantly plays with the reader’s mind and expectations, Gallows Court comes from the same place as the novels of Ruth Rendell (particularly when writing as Barbara Vine), P.D. James — and also, notably, Nicholas Blake’s The Beast Must Die.

That being said, seasoned mystery readers still probably won’t have that much of a problem devining at least part of the solution: I had found answers (which turned out to be correct) to most of the plot’s underlying questions and riddles by the time I was approximately halfway through the book; and from that moment on it was chiefly thanks to Edwards’s skill as a storyteller and his way with words that I remained engaged until the end. Yet, while I even anticipated almost all of the novel’s final twists (like in a novel by Anthony Berkeley / Francis Iles, there are several), Edwards still managed to pull a Berkeley on me, as a result of which, had I been in our intrepid amateur sleuth’s shoes, I would have found myself facing a particularly gruesome death at the very end after all, thanks solely to the sheer overconfidence of having solved the mystery to my personal satisfaction and thus having dropped my guard a second too early, and promptly having the ground yanked out from under my feet by the most vicious of all turnabouts just when I was no longer expecting any such thing to happen. (In my defense, I didn’t have a print copy of the book on hand, otherwise I might well have deduced from the sheer amount of remaining pages alone that we couldn’t be done just yet. But that is quibbling and playing fair as little as an author dropping a deus ex machina solution from their hat at the very last moment — which Edwards decidedly doesn’t do, so I won’t begrudge him having bamboozled me after all at the end, either.)