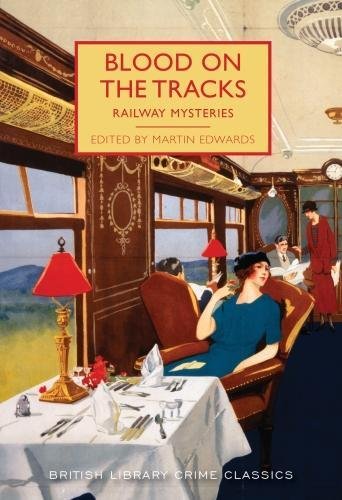 The January “side read” — topic: Murder by Transport — for the Appointment with Agatha / Agatha Christie Centenary Celebration group read (blog master post HERE; Goodreads group HERE): For me, another reread after first having read this collection only last year, but decidedly one of my favorites among the British Library Classic Crime short story anthologies edited by Martin Edwards.  Like its sister anthologies, the book features a number of short mysteries by Golden — and Silver — Age writers, tied together topically (in this instance, as the title indicates, the overarching topic is “railroads”) and ordered roughly by publication date.  In all, there are 15 stories in this volume:

Having previously read something else by most of these authors in my personal exploration of the world of Golden Age mysteries, I can say that in most cases these stories give a fairly good impression of the respective writers’ style (at least at the time of these writings); this is particularly true for the stories by Orczy, Whitechurch, Freeman, Bramah, and Sayers (whose style, in turn, probably evolved most later on) — so they are very apt to serve as an introduction to these writers for anybody thinking about exploring their work at greater length.

That said, although I am a great fan of Arthur Conan Doyle’s, the story included here, The Man with the Watches (which is taken from a collection named Round the Fire Stories) is decidedly not one of my favorites, but it is also the only story for which this is the case, and it is more than made up for by the Ronald Knox entry, The Adventure of the First-Class Carriage.  Knox was a considerable authority on Conan Doyle and Sherlock Holmes, and his story featured here is not concerned with his own series hero, an insurance detective named Miles Bredon, but rather, with Sherlock Holmes himself (complete with Dr. Watson and Inspector Slack in tow).  And as Holmes pastiches go, it’s an admirable effort — except for the fact that anybody familiar with the Holmes canon will be able to spot the who, how and why a mile away, and the story’s ending is (though ostensibly still paying hommage to Conan Doyle) perhaps a bit more Knox than ACD after all.

Overall, my favorite stories in this collection are R. Austin Freeman’s much-anthologized Case of Oscar Brodski (one of the early short stories in which Freeman developed his unique structural narrative approach — another famous and equally frequently-anthologized one being The Singing Bone),* Dorothy L. Sayers’s Unsolved Puzzle of the Man with No Face (a fine example of an early Wimsey mystery), Michael Gilbert’s The Coulman Handicap (featuring a cleverly-designed cat and mouse game all across London between the police and a gang of thieves), and Freeman Wills Crofts’s The Level Crossing.  The latter for once also has the virtue of not being typical Crofts fare at all: As mentioned in connection with J.J. Connington’s Mystery at Lynden Sands, in most of his writing Crofts is a representative of the “plodding / humdrum detective” tradition; i.e., of mysteries which, in their desire to play fair with the reader and to place him / her on exactly the same footing as the fictional detective by laying out the path to each and every clue precisely as it is travelled by the detective, more than just occasionally sacrifice suspense for detail.  Not so here, however: The Level Crossing is, like R. Austin Freeman’s story, styled as an inverted mystery, i.e. one where you see the crime being committed from the first (for a classic screen version using this format, think of the Columbo series), and which nevertheless manages to offer up more than just one surprise twist before the end.

*  In Freeman’s own words, from the introduction to the five-story collection The Adventures of Dr. Thorndyke:

“Some years ago I devised, as an experiment, an inverted detective story in two parts. The first part was a minute and detailed description of a crime, setting forth the antecedents, motives, and all attendant circumstances.  The reader had seen the crime committed, knew all about the criminal, and was in possession of all the facts.  It would have seemed that there was nothing left to tell.  But … the reader would be so occupied with the crime that he would overlook the evidence.“”

(And it would then, of course, be for Dr. Thorndyke to unravel the evidence and solve the case.)