Martha Gellhorn: Travels with Myself and Another 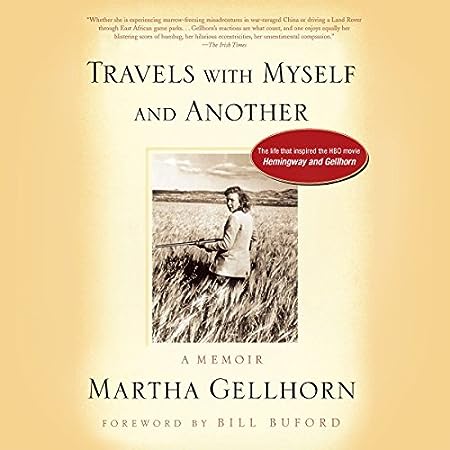 Festive Tasks Door 10 – Peace, Book: Read a book in which the ending of a conflict is a major theme.

Gellhorn is a sharp observer and she has a way with words — I’d just wish she’d liked people and, for that matter, the places she visited a bit better than she obviously did.  She says in this memoir’s opening chapter that people only seem to be interested in a narration of your travels if the story you are going to tell is one of horrors and misfortunes; and she really does seem to have taken that motto as her guiding line in selecting the travel experiences she proceeds to relate: I dispute both her premise and the attitude which this has lead her to adopt.

Granted, in the stories she shares I really would not have wanted to change places with her — and she must have had one heck of a physical constitution, to have survived multiple instances of denge fever, bilharzia and other tropical horrors, not to mention third-degree sunburns and similar forms of unpleasantness, wherever she went.  And her guardian angel was obviously doing overtime on her multiple encounters with wild animals, from elephants to lions and an unnamed species of rapacious fish swarm of the barracuda / piranha sort.  And, yes, I’d have found Africa in the waning days of the colonial empires seriously trying from a social perspective as well.  And it’s even easy to see that she’d have been bored out of her skull, visiting all of these places under the conditions of easy late-20th century travel, with air-conditioned hotel rooms, (more or less) reliable travel schedules, and organized safaris.

But let’s face it, if you’re a travel writer it just may occasionally be helpful to be able to take a step back and put a bit of a distance between your own emotions and the experience you’re relaying, and a sense of humoro (even in the face of adversity — at least when writing about it afterwards) doesn’t exactly go amiss, either.  Gellhorn seems to have had neither; for large stretches of the book she just comes across as bossy and arrogant, even if I found that I shared (albeit without the benefit of personal experience) many of her assessments on colonial society in Africa especially.  I vastly prefer the narrative style of the likes of Patrick Leigh Fermor, Colin Thubron, Nicholas Bouvier or, for that matter, Beryl Markham, who all have stories of extraordinary dangers and daring to relate as well, yet do so with a genuine enthusiasm and a perspective vastly transcending that of the experience of the moment, and in fact place that experience into a wider historical, social, political and philosophical context.  Gellhorn was very well capable of that sort of perspective, too — her predictions on the first decades of post-colonial Africa came true virtually to the letter –; it’s a pity that this didn’t lead her to rethink her approach to her narrative style and topical selection  Because I, for one, do not want to read about horrors and (barely avoided) catastrophes told in the mewling voice of a discontented child all of the time.

Then again, I wouldn’t have wanted to travel with Ernest Hemingway, either.

I’m using this memoir as my book for Festive Tasks Door 10: Much of the narrative is impacted by WWII (the end of which, in the form of the Japanese capitulation, Gellhorn experienced in Bali): While the war itself and its actual termination features only in episodical flashbacks, the world that Gellhorn describes is essentially the world that has newly been shaped by the end of that war: post-WWII Taiwan of Chiang Kai-shek (and his wife), the postwar erosion of the British and French colonial empires, the impact of the war on the small Caribbean island nations, and last but not least, the post-Stalinist Soviet Union.

One thought on “Martha Gellhorn: Travels with Myself and Another”