Margery Allingham: Death of a Ghost 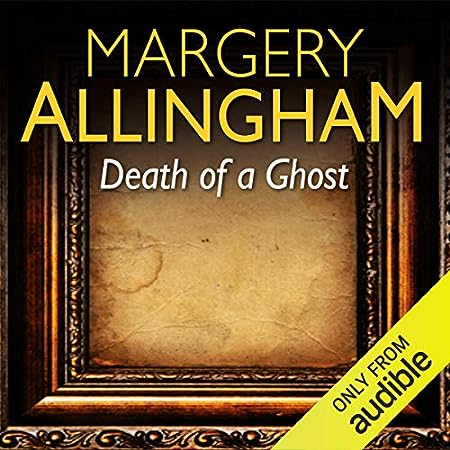 Unlike my reading experience with Allingham’s fellow Golden Age Queens of Crime Dorothy L. Sayers, Agatha Christie and Ngaio Marsh, that with Margery Allingham’s Albert Campion series is a rather checkered one, where instances of true mystery reader’s delight repeatedly follow hot on the heels of groan-inducing forays into clichéd, implausible plots populated by cardboard characters, and vice versa.  That said, even upon my first read I considered Death of a Ghost one of the series’s absolutely standout entries, and that impression has only been confirmed and reinforced by revisiting the book.  Set in the art world and populated by a cast of fully drawn, quirky characters (some likeable, some decidedly less so), the book lives off Allingham’s acerbic wit, which is brought out to great advantage here; and although Campion tumbles to the probable identity of the murderer when we’re barely halfway into the book, Allingham easily maintains the reader’s interest by keeping the “how” a puzzle, and by tying in a further puzzle whose solution will eventually provide the motive for the murder.  If there is any letdown in the book at all, it’s in the murderer’s ultimate fate, but by and large, this is a superlative effort.

As a side note, I’ve also concluded that the audio versions of Allingham’s novels work decidedly better for me if read by Francis Matthews rather than David Thorpe.  I have no problem with Thorpe as a narrator of other books, but he takes a rather literal approach to Allingham’s description of Campion’s voice, making it come across almost as a falsetto, which in combination with his overly expressive narration as a whole tends to drive me clean up the wall.  Matthews’s delivery, by contrast, while hinting at Campion’s vocal patterns, is a bit more matter of fact overall (even though it still leaves plenty of room for characterization, both of people and of plot elements) — an impression that was swiftly confirmed when a search for further Allingham titles recorded by Matthews threw up a non-Campion mystery of hers, Black Plumes, which in turn also confirmed my impression that some of Allingham’s best writing is contained in books other than her Campion mysteries.

4 thoughts on “Margery Allingham: Death of a Ghost”