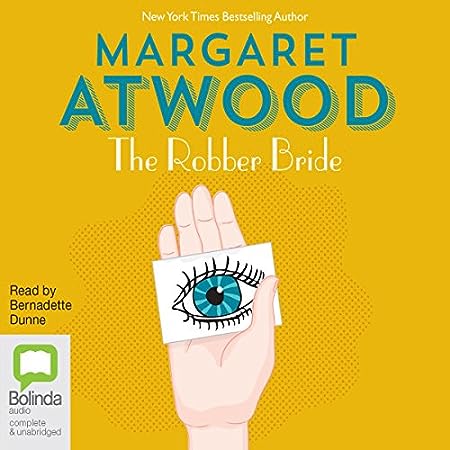 Double sigh.  After the disappointment of Anne Tyler’s take on Shakespeare’s The Taming of the Shrew I was in serious need of a pick-me-up, and after having enjoyed two other works of this sort by Margaret Atwood — as I said in my review of Tyler’s book, I really liked Hag-Seed, Atwood’s own entry in the Hogarth Shakespeare canon, and I absolutely loved The Penelopiad, especially in the incarnation of Laural Merlington’s simply brilliant narration, or rather, tour de force performance — you’d think I couldn’t possibly go wrong with this one, right?  Right??  WRONG.

Oh man.  The story, particularly as reconceived by Atwood, has so much potential.  Three women facing up to the “robber bride” who has ruined all three of their lives and stolen their men into the bargain?  Pyrotechnics!  Cat fights!  Stiletto heels!  Steel chains!  Leather and lace!  Lights!  Camera!  Action!

More like, three extended treatises on all the reasons why there should be the mother of all bangs, followed by … not exactly a whisper; there actually is a bang of sorts, but it’s all over (and without much shouting, too) in the blink of an eye, and then we get sort of three afterwords contemplating on why this might all be a good thing (at least, arguably so, though we’re not really sure about that, either, are we?).

In other words, in the place where my expectations for this book were living, fully 4/5 of the book are exposition — the lengthy (and I do mean LENGTHY) life stories of the “robber bride” (Zenia)’s three perceived victims; plus a brief encounter between the bad girl and each the three good girls that doesn’t resolve anything (at best, it seems to set up some sort of resolution or final conflict or whatever, which however never actually occurs); prefaced by a visual but dialogue-less first encounter between Zenia and the three other ladies along the lines of “oh my God, she’s back … NOW WHAT??”, and followed by a “resolution” (of sorts) occurring off stage, while Zenia’s three victims are still running around on stage like headless chickens trying to get their stuff together.  Then they all go their more-or-less separate ways and each of them thinks another bit about life in general and in particular.  (Oh, and in case you’re wondering why the “robber bride” herself did what she did in the first place … I’m still wondering about that, too.  She is the one woman in the story into whose head we never get to peak at all.  Or, well, only indirectly by way of what she chooses to tell the others, some 99.9 – 100% of which however are lies.)

Obviously, my response to the book is, in large parts, due to the fact that I was expecting something that Atwood didn’t want to write, and what she did write — an in-depth examination of three women’s lives in the second half of the 20th century (an academic, an esoterically-minded housewife / part-time holistic store employee, and a business woman) was neither what I was expecting nor what I wanted to read at the time.  And as always, Atwood’s language and imagery is simply exquisite.  But I do think she wasted an enormous opportunity here in not actually fleshing out the conflict any more in the final part of the book — and as for the three women’s lives as such … sorry, Ms. Atwood, by your standards that stuff is (with the sole exception of Tony, the academic) largely downright sub-par and, at least for the time of this book’s publication (1993), badly cliché-ridden — in fact, the sort of women’s fates that everybody and their sister (and their mother, brother, and second cousin, too) had already written several times over at the time.  I’ve read enough books by you to know that you can do MUCH, much better (and fortunately, you did again thereafter).  So … NEXT!!