Lorenz Books: Around the World Cookbook 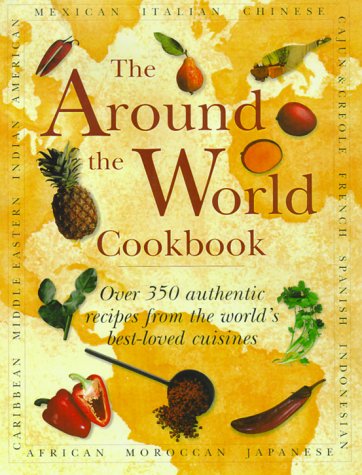 Around the World in 350+ Recipes

“Holidays in far flung places have increased our awareness of different foods, and restaurants on every street corner now offer dishes that no so long ago would have been unfamiliar,” the editors of this volume say in their introduction. And indeed: This is nothing less than a lavishly illustrated and marvelously edited culinary trip around the whole world, with stops in North and Sub-Saharan Africa, China, Japan, Indonesia, Thailand, India, the Middle East, Italy, Spain, France, North America, the Caribbean and Mexico.

All recipes are broken down into small, easy to follow steps, demonstrated in numerous photos. Ingredients are listed with quantities given both in the American and the metric measuring system, thus making the recipes easily accessible wherever you live. Numerous cook’s tips add to the cooking experience and ensure its success. Most of the ingredients are easy to come by, although some may require a trip to a specialty food market. You’ll find plenty of now well-known favorites from the regions represented here, as well as rare and new creations you might not have thought of yourself.

All in all, the book includes more than 350 recipes. If you’re interested in one regional cuisine in particular, you may want to get specialized cookbooks from that particular country or region in addition. But as an introduction and a primer, this volume is very hard to beat.