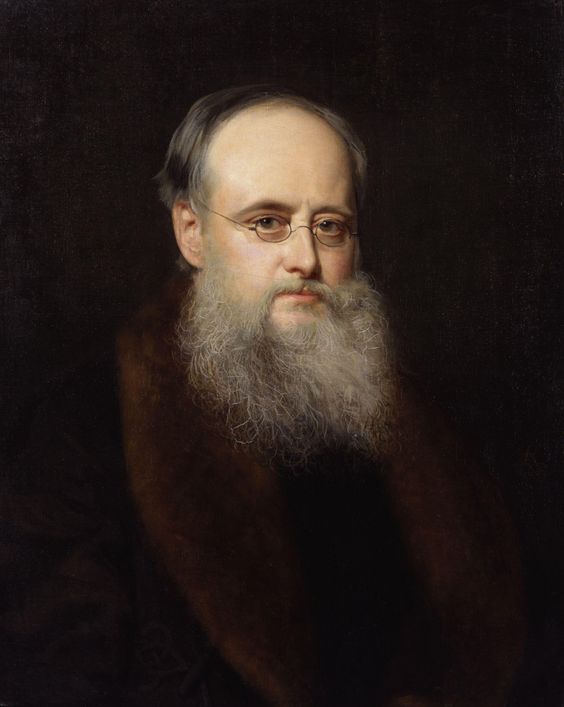 William Wilkie Collins (London, UK, January 8, 1824 – London, UK, September 23, 1889) was an English novelist and playwright known for The Woman in White (1859), and The Moonstone (1868), the latter of which has been posited as the first modern English detective novel.

Born to the London painter William Collins and his wife, he moved with the family to Italy when he was twelve, living there and in France for two years and learning Italian and French. He worked initially as a tea merchant. After publishing Antonina, his first novel, in 1850, Collins met Charles Dickens, who became a friend and mentor. Some Collins work first appeared in Dickens’s journals Household Words and All the Year Round. They also collaborated on drama and fiction. Collins gained financial stability and an international following by the 1860s, but began to suffer from gout and became addicted to the opium he took for the pain. His health and his writing quality then declined in the 1870s and 1880s. Collins was critical of the institution of marriage: he split his time between widow Caroline Graves – living with her for most of his adult life, treating her daughter as his – and the younger Martha Rudd, by whom he had three children.

The Woman in White

“Any woman who is sure of her own wits, is a match, at any time, for a man who is not sure of his own temper.”

“No sensible man ever engages, unprepared, in a fencing match of words with a woman.”

“Let the music speak to us of tonight, in a happier language than our own.”

“I have always held the old-fashioned opinion that the primary object of work of fiction should be to tell a story.”

“Nature has so much to do in this world, and is engaged in generating such a vast variety of co-existent productions, that she must surely be now and then too flurried and confused to distinguish between the different processes that she is carrying on at the same time. Starting from this point of view, it will always remain my private persuasion that Nature was absorbed in making cabbages when Mrs. Vesey was born, and that the good lady suffered the consequences of a vegetable preoccupation in the mind of the Mother of us all.”

“‘I am thinking,’ he remarked quietly, ‘whether I shall add to the disorder in this room, by scattering your brains about the fireplace.'”

“I sadly want a reform in the construction of children. Nature’s only idea seems to be to make them machines for the production of incessant noise.”

“But, ah me! where is the faultless human creature who can persevere in a good resolution, without sometimes failing and falling back?”

“We don’t want genius in this country unless it is accompanied by respectability.”

“He was in that state of highly respectful sulkiness which is peculiar to English servants.”

“The books – the generous friends who met me without suspicion – the merciful masters who never used me ill!”

“I haven’t much time to be fond of anything … but when I have a moment’s fondness to bestow, most times … the roses get it. I began my life among them in my father’s nursery garden, and I shall end my life among them, if I can. Yes. One of these days (please God) I shall retire from catching thieves, and try my hand at growing roses.”

“In all my experience along the dirtiest ways of this dirty little world, I have never met with such a thing as a trifle yet.”

“I did what you would probably have done in my place. I modestly declared myself to be quite unequal to the task imposed upon me – and I privately felt, all the time, that I was quite clever enough to perform it.”

“Nothing in this world is hidden forever. The gold which has lain for centuries unsuspected in the ground, reveals itself one day on the surface. Sand turns traitor, and betrays the footstep that has passed over it; water gives back to the tell-tale surface the body that has been drowned. Fire itself leaves the confession, in ashes, of the substance consumed in it. Hate breaks its prison-secrecy in the thoughts, through the doorway of the eyes; and Love finds the Judas who betrays it by a kiss. Look where we will, the inevitable law of revelation is one of the laws of nature: the lasting preservation of a secret is a miracle which the world has never yet seen.”

“If I ever meet with the man who fulfills my ideal, I shall make it a condition of the marriage settlement, that I am to have chocolate under the pillow.”

The dull people decided years and years ago, as everyone knows, that novel-writing was the lowest species of literary exertion, and that novel reading was a dangerous luxury and an utter waste of time.”

Find more quotes by Wilkie Collins on Wikiquote and Goodreads.