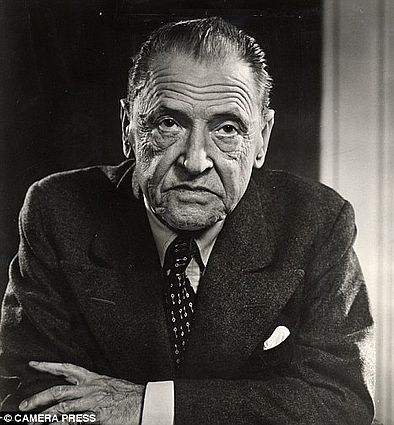 William Somerset Maugham, CH (UK Embassy, Paris, France, January 25, 1874 – Nice, France, December 16, 1965) was a British playwright, novelist and short story writer. He was among the most popular writers of his era and reputedly the highest paid author during the 1930s.

After losing both his parents by the age of 10, Maugham was raised by a paternal uncle who was emotionally cold. Not wanting to become a lawyer like other men in his family, Maugham eventually trained and qualified as a doctor. The first run of his first novel, Liza of Lambeth (1897), sold out so rapidly that Maugham gave up medicine to write full time. During World War I, he served with the Red Cross and in the ambulance corps, before being recruited in 1916 into the British Secret Intelligence Service, for which he worked in Switzerland and Russia before the Bolshevik Revolution of 1917. During and after the war, he traveled in India and Southeast Asia; all of these experiences were reflected in later short stories and novels.

Commercial success with high book sales, successful theatre productions and a string of film adaptations, backed by astute stock market investments, allowed Maugham to live a very comfortable life. Small and weak as a boy, Maugham had been proud even then of his stamina, and as an adult he kept churning out the books, proud that he could. Yet, despite his triumphs, he never attracted the highest respect from the critics or his peers. Maugham wrote at a time when experimental modernist literature such as that of William Faulkner, Thomas Mann, James Joyce and Virginia Woolf was gaining increasing popularity and winning critical acclaim. In this context, his plain prose style was derided by the American critic Edmund Wilson as “a tissue of clichés and [for] at his unfailing inability to put anything in an individual way”. But other writers acknowledged his work: Anthony Burgess, who included a complex fictional portrait of Maugham in the novel Earthly Powers, praised his influence; and similarly, George Orwell said that Maugham was “the modern writer who has influenced me the most.”

Maugham’s masterpiece is generally agreed to be Of Human Bondage (1915), a semiautobiographical novel that deals with the life of the main character Philip Carey, who, like Maugham, was orphaned, and brought up by his pious uncle. Philip’s clubfoot causes him endless self-consciousness and embarrassment, echoing Maugham’s struggles with his stutter and his homosexuality. Of Human Bondage initially was criticized in both England and the United States; however the influential American novelist and critic Theodore Dreiser effectively rescued the novel, referring to it as a work of genius and comparing it to a Beethoven symphony. His review gave the book a lift, and it has never been out of print since.

For a public man of Maugham’s generation, being openly gay was impossible. Whether his own orientation disgusted him (as it did many at a time when homosexuality was widely considered a moral failing as well as illegal) or whether he was trying to disguise his leanings, Maugham wrote disparagingly of the gay artist. However, as his sexual appetites were then officially disapproved of, or criminal, in nearly all of the countries in which he traveled, the author was unusually tolerant of the vices of others. When others complained that Maugham did not condemn what was bad in the villains of his fiction and plays, he replied: “It must be a fault in me that I am not gravely shocked at the sins of others unless they personally affect me.”

“People ask you for criticism, but they only want praise.”

“Every production of an artist should be the expression of an adventure of his soul.”

The Moon And Sixpence

“Impropriety is the soul of wit.”

“To acquire the habit of reading is to construct for yourself a refuge from almost all the miseries of life.”

“When you choose your friends, don’t be short-changed by choosing personality over character.”