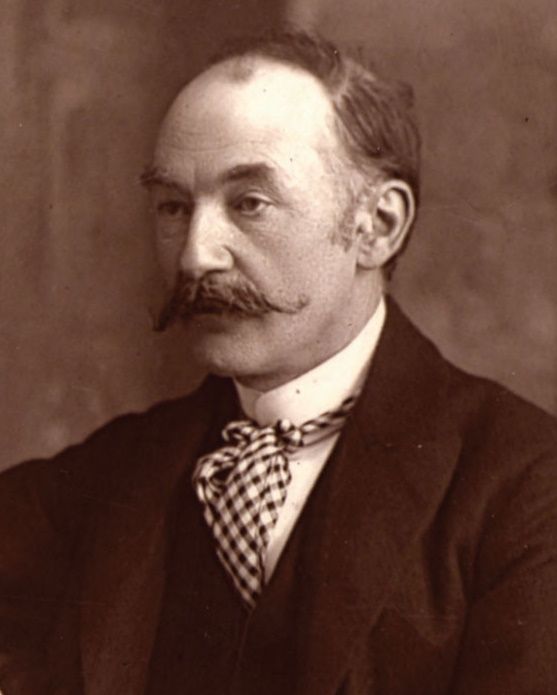 Thomas Hardy, OM (Stinsford near Dorchester, Dorset, England, June 2, 1840 – Dorchester, Dorset, England, January 11, 1928) was an English novelist and poet. A Victorian realist, in the tradition of George Eliot, he was also influenced both in his novels and poetry by Romanticism, especially by William Wordsworth. Charles Dickens is another important influence on Thomas Hardy. Like Dickens, he was also highly critical of much in Victorian society, though Hardy focused more on a declining rural society.

While Hardy wrote poetry throughout his life, and regarded himself primarily as a poet, his first collection was not published until 1898. Initially therefore he gained fame as the author of such novels as Far from the Madding Crowd (1874), The Mayor of Casterbridge (1886), Tess of the d’Urbervilles (1891), and Jude the Obscure (1895). However, since the 1950s Hardy has been recognized as a major poet, and had a significant influence on The Movement poets of the 1950s and 1960s, including Phillip Larkin.

The bulk of his fictional works, initially published as serials in magazines, were set in the semi-fictional region of Wessex and explored tragic characters struggling against their passions and social circumstances. Hardy’s Wessex is based on the medieval Anglo-Saxon kingdom and eventually came to include the counties of Dorset, Wiltshire, Somerset, Devon, Hampshire, and much of Berkshire, in south west England.

The Return of the Native

“Why is it that a woman can see from a distance what a man cannot see close?”

“People go on marrying because they can’t resist natural forces, although many of them may know perfectly well that they are possibly buying a month’s pleasure with a life’s discomfort.”

“Along the sculptures of the western wall
I watched the moonlight creeping:
It moved as if it hardly moved at all
Inch by inch thinly peeping
Round on the pious figures of freestone, brought
And poised there when the Universe was wrought
To serve its centre, Earth, in mankind’s thought.

The lunar look skimmed scantly toe, breast, arm,
Then edged on slowly, slightly,
To shoulder, hand, face; till each austere form
Was blanched its whole length brightly
Of prophet, king, queen, cardinal in state,
That dead men’s tools had striven to simulate;
And the stiff images stood irradiate.

A frail moan from the martyred saints there set
Mid others of the erection
Against the breeze, seemed sighings of regret
At the ancient faith’s rejection
Under the sure, unhasting, steady stress
Of Reason’s movement, making meaningless.”

Find more quotes by Thomas Hardy on Wikiquote and Goodreads.