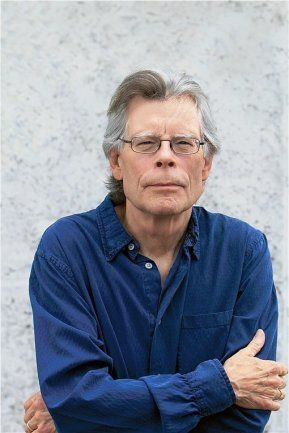 Stephen Edwin King (born Portland, ME, USA, September 21, 1947) is an American author of contemporary horror, suspense, science fiction and fantasy. His books have sold more than 350 million copies and have been adapted into a number of feature films, television movies and comic books.

King’s career as a writer began when in 1973 his first novel Carrie was accepted by publishing house Doubleday. King threw an early draft of the novel in the trash after becoming discouraged with his progress writing about a teenage girl with psychic powers. His wife retrieved the manuscript and encouraged him to finish it. His advance for Carrie was $2,500, with paperback rights earning $400,000 at a later date. In the interim, King has published 50 novels, including seven under the pen-name of Richard Bachman, and five non-fiction books, including the 200 memoir On Writing, which chronicles both his personal and his professional experience as a writer. He has written nearly two hundred short stories, most of which have been collected in nine collections of short fiction. Many of his stories are set in his home state of Maine.

King often uses authors as characters, or includes mention of fictional books in his stories, novellas and novels, such as Paul Sheldon who is the main character in Misery and Jack Torrance in The Shining. – King has called Richard Matheson “the author who influenced me most as a writer.” Both authors casually integrate characters’ thoughts into the third person narration, just one of several parallels between their writing styles. Ray Bradbury is another influence, with King himself having stated that without Ray Bradbury, there would be no Stephen King. King also acknowledges the influence of Bram Stoker, particularly on his novel ‘Salem’s Lot, which he envisioned as a retelling of Dracula.

In an interview with King, published in the USA Weekend in March 2009, the author stated, “People look on writers that they like as an irreplaceable resource. I do. Elmore Leonard, every day I wake up and – not to be morbid or anything, although morbid is my life to a degree – don’t see his obituary in the paper, I think to myself, “Great! He’s probably working somewhere. He’s gonna produce another book, and I’ll have another book to read. Because when he’s gone, there’s nobody else.”

In his short story collection A Century of Great Suspense Stories, editor Jeffery Deaver noted that King, in turn, “singlehandedly made popular fiction grow up. While there were many good best-selling writers before him, King, more than anybody since John D. MacDonald, brought reality to genre novels. He’s often remarked that ‘Salem’s Lot was “Peyton Place meets Dracula.” And so it was. The rich characterization, the careful and caring social eye, the interplay of story line and character development announced that writers could take worn themes such as vampirism and make them fresh again. Before King, many popular writers found their efforts to make their books serious blue-penciled by their editors. ‘Stuff like that gets in the way of the story,’ they were told. Well, it’s stuff like that that has made King so popular, and helped free the popular name from the shackles of simple genre writing. He is a master of masters.” – Similarly, Roger Ebert, in his review of the 2004 movie Secret Window, stated, “A lot of people were outraged that [King] was honored at the National Book Awards, as if a popular writer could not be taken seriously. But after finding that his book On Writing had more useful and observant things to say about the craft than any book since Strunk and White’s The Elements of Style, I have gotten over my own snobbery.”

King has received Bram Stoker Awards, World Fantasy Awards, British Fantasy Society Awards, his novella The Way Station was a Nebula Award novelette nominee, and his short story The Man in the Black Suit received the O. Henry Award. In 2003, the National Book Foundation awarded him the Medal for Distinguished Contribution to American Letters. He has also received awards for his contribution to literature for his whole career, such as the World Fantasy Award for Life Achievement (2004), the Canadian Booksellers Association Lifetime Achievement Award (2007) and the Grand Master Award from the Mystery Writers of America (2007). In 2008, On Writing was ranked 21st on Entertainment Weekly list of “The New Classics: The 100 Best Reads from 1983 to 2008.”

“Books are a uniquely portable magic.”

“I have spent a good many years since – too many, I think – being ashamed about what I write. I think I was forty before I realized that almost every writer of fiction or poetry who has ever published a line has been accused by someone of wasting his or her God-given talent. If you write (or paint or dance or sculpt or sing, I suppose), someone will try to make you feel lousy about it, that’s all.”

“Some birds are not meant to be caged, that’s all. Their feathers are too bright, their songs too sweet and wild. So you let them go, or when you open the cage to feed them they somehow fly out past you. And the part of you that knows it was wrong to imprison them in the first place rejoices, but still, the place where you live is that much more drab and empty for their departure.”

“Friends don’t spy; true friendship is about privacy, too.”

“But then fall comes, kicking summer out on its treacherous ass as it always does one day sometime after the midpoint of September, it stays awhile like an old friend that you have missed. It settles in the way an old friend will settle into your favorite chair and take out his pipe and light it and then fill the afternoon with stories of places he has been and things he has done since last he saw you.”

Find more quotes by Stephen King on Wikiquote and Goodreads.