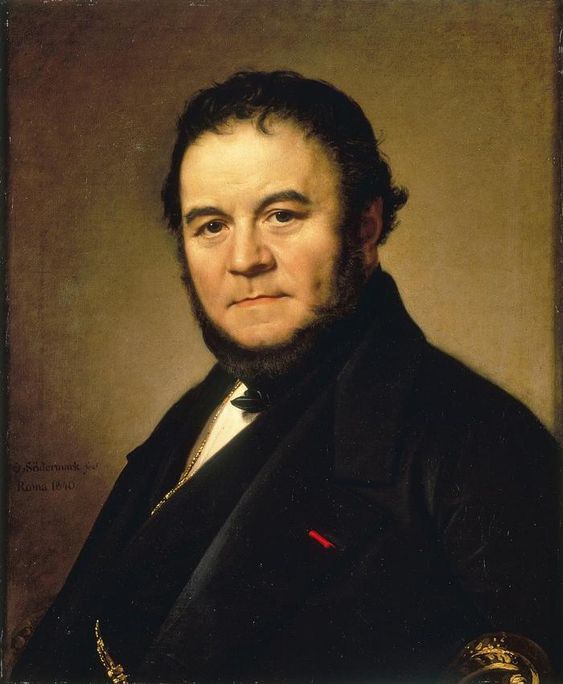 Marie-Henri Beyle (Grenoble, France, January 23, 1783 – Paris, France, March 23, 1842), better known by his pen name Stendhal, was a 19th-century French writer. Known for his acute analysis of his characters’ psychology, he is considered one of the earliest and foremost practitioners of realism, as is evident in the novels Le Rouge et le Noir (The Red and the Black, 1830) and La Chartreuse de Parme (The Charterhouse of Parma, 1839, penned in a mere 52 days).

Beyle used the pseudonym “Stendhal” (and over 100 others), and scholars in general believe he borrowed this nom de plume from the German city of Stendal in homage to pioneering German art historian and archaeologist Johann Joachim Winckelmann, who was born there. Beyle himself had been stationed at Stendal as a soldier during the Napoleonic Wars.

One of the writer’s early works is On Love, a rational analysis of romantic passion that was based on his unrequited love for Mathilde, Countess Dembowska, whom he met while living at Milan. This fusion of, and tension between, clear-headed analysis and romantic feeling is typical of Stendhal’s great novels; he could be considered a Romantic realist.

His masterpiece is widely considered to be the 1830 novel Le Rouge et le Noir, chronique du XIXe siècle (variously translated into English as Red and Black, Scarlet and Black, and The Red and the Black, typically without the subtitle), a historical psychological portrait chronicling a provincial young man’s attempts to rise socially beyond his modest upbringing with a combination of talent and hard work, deception and hypocrisy – yet who ultimately allows his passions to betray him. The novel’s composite full title indicates its two-fold literary purpose as a psychological portrait of the romantic protagonist, Julien Sorel, and an analytic, sociological satire of the French social order under the Bourbon Restoration (1814 – 30).

Contemporary readers did not fully appreciate Stendhal’s realistic style during the Romantic period in which he lived; he was not fully appreciated until the beginning of the 20th century. He dedicated his writing to “the Happy Few.” This is often interpreted as either a dedication to the few who could understand his writing, or as a sardonic reference to the happy few who are born into prosperity (the latter interpretation is supported by the likely source of the quotation, Canto 11 of Byron’s Don Juan, a frequent reference, which refers to “the thousand happy few” who enjoy high society), or as a reference to those who lived without fear or hatred. It may also refer, given Stendhal’s experience of the Napoleonic wars, to the “we few, we happy few, we band of brothers” line of Shakespeare’s Henry V.

Stendhal did have influence as a literary critic. In Racine and Shakespeare he championed the Romantic aesthetic, comparing the rules and strictures of Racine’s classicism unfavorably to the freer verse and settings of Shakespeare, and supporting the writing of plays in prose. The German philosopher Friedrich Nietzsche acknowledged his personal debt to the French writer in the Twilight of the Idols (when referring to Fyodor Dostoevsky as the only psychologist from whom he had something to learn), stating that encountering Dostoevsky was “the most beautiful accident of my life, more so than even my discovery of Stendhal”. Today, Stendhal’s works attract attention for their irony and psychological and historical dimensions.

Stendhal was also an avid fan of music, particularly the works of the composers Cimarosa, Mozart and Rossini. He wrote a biography of Rossini, Vie de Rossini (1824), which today is, however, more valued for its wide-ranging musical criticism than for its historical content.

Read more about Stendhal on Wikipedia.

The Red and the Black

“A good book is an event in my life.”

“Ah, Sir, a novel is a mirror carried along a high road. At one moment it reflects to your vision the azure skies, at another the mire of the puddles at your feet. And the man who carries this mirror in his pack will be accused by you of being immoral! His mirror shews the mire, and you blame the mirror! Rather blame that high road upon which the puddle lies, still more the inspector of roads who allows the water to gather and the puddle to form.”

“Your career will be a painful one. I divine something in you which offends the vulgar.”

“The footman burst in, announcing, ‘Monsieur le Duc de –.’
‘Hold your tongue, you fool,’ said the Duke as he entered the room. He said this so well, and with such majesty than Julien could not help thinking that knowing how to lose his temper with a footman was the whole extent of this great personage’s knowledge.”

“There are as many styles of beauty as there are visions of happiness.”

The Private Diaries of Stendhal

Find more quotes by Stendhal on Wikiquote and Goodreads.