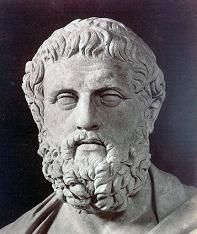 Sophocles (Greek: Σοφοκλῆς, Sophoklēs; Colonus/Athens, Greece, c. 497/6 BC – Athens, Greece, winter 406/5 BC) is one of three ancient Greek tragedians whose plays have survived. His first plays were written later than those of Aischylos, and earlier than or contemporary with those of Euripides. According to the Suda, a 10th century encyclopedia, Sophocles wrote 123 plays during the course of his life, but only seven have survived in a complete form: Ajax, Antigone, The Women of Trachis, Oedipus the King, Electra, Philoctetes and Oedipus at Colonus. For almost 50 years, Sophocles was the most-fêted playwright in the dramatic competitions of the city-state of Athens that took place during the religious festivals of the Lenaea and the Dionysia. He competed in around 30 competitions, won perhaps 24, and was never judged lower than second place. Aischylos won 14 competitions, and was sometimes defeated by Sophocles, while Euripides won only 4 competitions.

The most famous tragedies of Sophocles feature Oedipus and Antigone: they are generally known as the Theban Plays, although each play was actually a part of a different tetralogy, the other members of which are now lost. Sophocles influenced the development of the drama, most importantly by adding a third actor, thereby reducing the importance of the chorus in the presentation of the plot. He also developed his characters to a greater extent than earlier playwrights such as Aischylos.

Read more about Sophocles on Wikipedia.

“There’s nothing in the world so demoralizing as money.”

“When I have tried and failed, I shall have failed.”

“I have nothing but contempt for the kind of governor who is afraid, for whatever reason, to follow the course that he knows is best for the State.”

“Fear? What has a man to do with fear? Chance rules our lives, and the future is all unknown. Best live as we may, from day to day.”

“The tyrant is a child of Pride
Who drinks from his sickening cup
Recklessness and vanity,
Until from his high crest headlong
He plummets to the dust of hope.”

“If you try to cure evil with evil
you will add more pain to your fate.”

Find more quotes by Sophocles on Wikiquote and Goodreads.