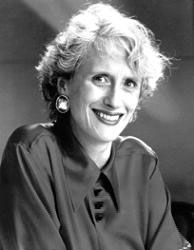 Sara Paretsky (born Ames, IA, USA, June 8, 1947) is a modern American author of detective fiction. The protagonist of all but two of Paretsky’s novels is V.I. Warshawski, a female private investigator. Warshawski’s eclectic personality defies easy categorization. She drinks Johnnie Walker Black Label, breaks into offices looking for clues, and can hold her own in a street fight. But she also pays attention to her clothes, sings opera along with the radio, and enjoys her sex life.

Paretsky is credited with transforming the role and image of women in the crime novel. She also is considered the founding mother of Sisters in Crime, an organization that supports and promotes women in the mystery field. Paretsky was named 2011 Grand Master by the Mystery Writers of America. She is the winner of many awards, including the Cartier Diamond Dagger Award for lifetime achievement from the British Crime Writers’ Association and the CWA Gold Dagger for her novel Blacklist.