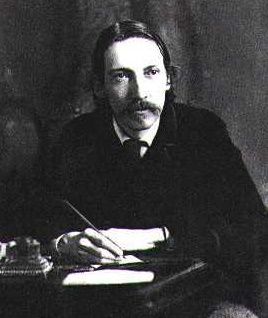 Born and educated in Edinburgh, Stevenson suffered from serious bronchial trouble for much of his life, but continued to write prolifically and travel widely in defiance of his poor health. As a young man, he mixed in London literary circles, receiving encouragement from Andrew Lang, Edmund Gosse, Leslie Stephen and W. E. Henley, the last of whom may have provided the model for Long John Silver in Treasure Island. In 1890, he settled in Samoa where, alarmed at increasing European and American influence in the South Sea islands, his writing turned away from romance and adventure toward a darker realism. He died in his island home in 1894.

A celebrity in his lifetime, Stevenson’s critical reputation has fluctuated since his death; however, the late 20th century brought a re-evaluation of Stevenson as an artist of great range and insight, a literary theorist, an essayist and social critic, a witness to the colonial history of the Pacific Islands and a humanist.  He was praised by Roger Lancelyn Green, one of the Oxford Inklings, as a writer of a consistently high level of literary skill or sheer imaginative power and a pioneer of the Age of the Storytellers.  He is now held in high acclaim, with new scholarly studies and organisations devoted to him. Throughout the vicissitudes of his scholarly reception, Stevenson has remained popular worldwide. According to the United Nations Index Translationum, Stevenson is ranked the 26th-most-translated author in the world, just behind Charles Dickens and ahead of Oscar Wilde and Edgar Allan Poe.

Other Novels and Novellas

Essays and Other Nonfiction

“There are two things that men should never weary of, goodness and humility; we get none too much of them in this rough world among cold, proud people.”

“To be feared of a thing and yet to do it, is what makes the prettiest kind of a man.”

“A good conscience is eight parts of courage.”

Travels with a Donkey in the Cévennes

“I travel not to go anywhere, but to go. I travel for travel’s sake. The great affair is to move.”

“I kept always two books in my pocket, one to read, one to write in.”

“The cruelest lies are often told in silence.”

“Times are changed with him who marries; there are no more by-path meadows, where you may innocently linger, but the road lies long and straight and dusty to the grave.”

“There are no foreign lands. It is the traveler only who is foreign.”

Familiar Studies of Men and Books

“To be what we are, and to become what we are capable of becoming, is the only end of life.”

“To know what you prefer instead of humbly saying Amen to what the world tells you you ought to prefer, is to have kept your soul alive.”

An Apology for Idlers

“There is no duty we so much underrate as the duty of being happy.”

“An intelligent person, looking out of his eyes and hearkening in his ears, with a smile on his face all the time, will get more true education than many another in a life of heroic vigils.”

“A happy man or woman is a better thing to find than a five-pound note. He or she is a radiating focus of goodwill; and their entrance into a room is as though another candle had been lighted.”

“Idleness so called, which does not consist in doing nothing, but in doing a great deal not recognized in the dogmatic formularies of the ruling class, has as good a right to state its position as industry itself.”

“Ethics are my veiled mistress; I love them, but know not what they are.”

Essays in the Art of Writing

“The gift of reading, as I have called it, is not very common, nor very generally understood. It consists, first of all, in a vast intellectual endowment – a free grace, I find I must call it – by which a man rises to understand that he is not punctually right, nor those from whom he differs absolutely wrong.”

“The most influential books, and the truest in their influence, are works of fiction. They do not pin the reader to a dogma, which he must afterwards discover to be inexact; they do not teach him a lesson, which he must afterwards unlearn. They repeat, they rearrange, they clarify the lessons of life; they disengage us from ourselves, they constrain us to the acquaintance of others; and they show us the web of experience, not as we can see it for ourselves, but with a singular change – that monstrous, consuming ego of ours being, for the nonce, struck out. To be so, they must be reasonably true to the human comedy; and any work that is so serves the turn of instruction.”

“There is a kind of gaping admiration that would fain roll Shakespeare and Bacon into one, to have a bigger thing to gape at; and a class of men who cannot edit one author without disparaging all others.”

“Half a capital and half a country town, the whole city leads a double existence; it has long trances of the one and flashes of the other; like the king of the Black Isles, it is half alive and half a monumental marble.”

“Into no other city does the sight of the country enter so far; if you do not meet a butterfly, you shall certainly catch a glimpse of far-away trees upon your walk; and the place is full of theatre tricks in the way of scenery. You peep under an arch, you descend stairs that look as if they would land you in a cellar, you turn to the back-window of a grimy tenement in a lane:– and behold! you are face-to-face with distant and bright prospects. You turn a corner, and there is the sun going down into the Highland hills. You look down an alley, and see ships tacking for the Baltic.”

A Lodging for the Night

“In many ways an artistic nature unfits a man for a practical existence.”

“Sir, with no intention to take offence, I deny your right to put words into my mouth.”

“In the immediate nearness of the gold, all else had been forgotten.”

“They say cowardice is infectious; but then argument is, on the other hand, a great emboldener.”

“You start a question, and it’s like starting a stone. You sit quietly on the top of a hill; and away the stone goes, starting others …”

“Good and evil are so close as to be chained together in the soul.”

“The fog still slept on the wing above the drowned city, where the lamps glimmered like carbuncles; and through the muffle and smother of these fallen clouds, the procession of the town’s life was still rolling in through the great arteries with a sound as of a mighty wind.”

“A hanging in a good quarrel is an easy death they say, though I could never hear of any that came back to say so.”

The Master of Ballantrae

“It is one of the worst things of sentiment that the voice grows to be more important than the words, and the speaker than that what is spoken.”

“Let any one speak long enough, he will get believers.”

“Alas! in the clothes of the greatest potentate, what is there but a man?”

A Child’s Garden of Verses

“Time which none can bind,
While flowing fast away, leaves love behind.”

“You think those dogs will not be in heaven! I tell you they will be there long before any of us.”