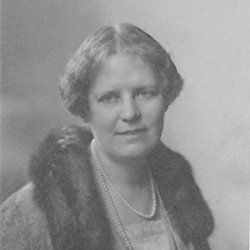 Wentworth began as a writer of historical and romance novels, but is best known for a series of 32 mysteries in the classic whodunit style, featuring Miss Maud Silver, a retired governess and teacher who has become a professional private detective in London. Miss Silver works closely with Scotland Yard, especially with Inspectors Randal March, Ernest Lamb and Frank Abbott, and she is fond of quoting Tennyson. She is sometimes compared to Miss Jane Marple, the elderly detective created by Agatha Christie.

“Miss Silver is well known in the better circles of society, and she finds entree to the troubled households of the upper classes with little difficulty. In most of Miss Silver’s cases there is a young couple whose romance seems ill fated because of the murder to be solved, but in Miss Silver’s competent hands the case is solved, the young couple are exonerated, and all is right in this very traditional world.”
(Jean Swanson and Dean James: Killer Books: A Reader’s Guide to Exploring the Popular World of Mystery and Suspense; New York, 1998)

Wentworth also wrote 34 books outside of that series. She won the Melrose prize in 1910 for her first novel A Marriage Under The Terror, set during the French Revolution.

“Miss Silver tapped with her pencil.
‘Are you suggesting that we should apply for a search warrant?’
‘No, I’m not.  I’m suggestin’ doin’ a little job of breakin’ and enterin’.  Look here, Miss Silver, are you game? […]’
‘I’ve my reputation to consider,’ said Miss Silver. She coughed. ‘If I were walking along George Street and were to ring [that house’s] bell –‘ she paused and gazed at him mildly.  ‘If you opened the door to me, it really would not be any business of mine how you got in.'”

“Miss Silver turned her torch down, picked up a metal bar, and put it into Archie’s hand.
‘What is it?’
‘Well,’ said Miss Silver — she gave a slight cough — ‘I believe it is called a jemmy — an instrument in use amongst burglars.  I, of course, have my reputation to consider. But if you –‘ She coughed again. ‘It really seems quite providential — doesn’t it?’
‘Heaven helps those who help themselves, in fact,’ responded Archie.
Miss Silver proceeded to give him expert advice as to lock-breaking.”