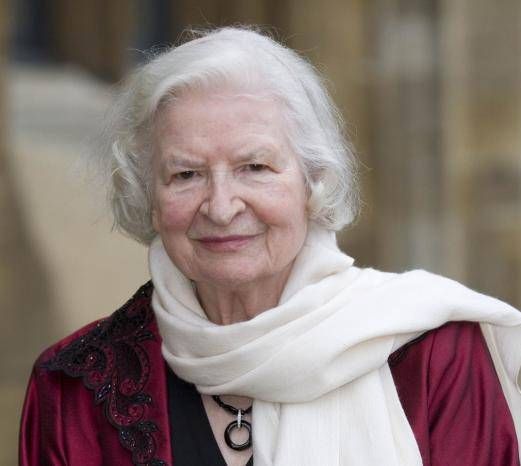 Phyllis Dorothy James, Baroness James of Holland Park, OBE, FRSA, FRSL (Oxford, England, August 3, 1920 – Oxford, England, November 27, 2014), commonly known as P.D. James, was an English crime writer and a life peer in the House of Lords. She became most famous for a series of detective novels starring policeman and poet Adam Dalgliesh (whom she named after a teacher at Cambridge High School).

Many of James’s mystery novels are set against the backdrop of the UK’s bureaucracies, such as the criminal justice system and the National Health Service, in which James worked for decades starting in the 1940s. Her later novels are also often set in a community closed in some way, such as a publishing house or barristers’ chambers, a theological college, an island or a private clinic. The Private Patient was the final Dalgliesh novel. – Over her writing career James also wrote many essays and short stories for periodicals and anthologies, which have yet to be collected.

During the 1980s many of James’s mystery novels were adapted for television, featuring Roy Marsden as Adam Dalgliesh. P.D. James said in a 2001 conversation recorded for TV that Roy Marsden “… is not my idea of Dalgliesh, but I would be very surprised if he were.” The BBC has since adapted Death in Holy Orders (2003) and The Murder Room (2004) as one-off dramas starring Martin Shaw as Dalgliesh. Her novel The Children of Men (1992) was the basis for the feature film Children of Men (2006), directed by Alfonso Cuarón and starring Clive Owen, Julianne Moore and Michael Caine. Despite substantial changes from the book, James was reportedly pleased with the adaptation and proud to be associated with the film.

In 2008, she was inducted into the International Crime Writing Hall of Fame at the inaugural ITV3 Crime Thriller Awards.

“[Soho] is all things to all men, catering comprehensively for those needs which money can buy. You see it as you wish. An agreeable place to dine; a cosmopolitan village tucked away behind Piccadilly with its own mysterious village life, one of the best shopping centres for food in London, the nastiest and most sordid nursery of crime in Europe. Even the travel journalists, obsessed by its ambiguities, can’t make up their minds.”

“What about his style?” asked Dalgliesh who was beginning to think that his reading had been unnecessarily restricted.
“Turgid but grammatical. And, in these days, when every illiterate debutante thinks she is a novelist, who am I to quarrel with that? Written with Fowler on his left hand and Roget on his right. Stale, flat and, alas, rapidly becoming unprofitable …”
“What was he like as a person?” asked Dalgliesh.
“Oh, difficult. Very difficult, poor fellow! I thought you knew him? A precise, self-opinionated, nervous little man perpetually fretting about his sales, his publicity or his book jackets. He overvalued his own talent and undervalued everyone else’s, which didn’t exactly make for popularity.”
“A typical writer, in fact?” suggested Dalgliesh mischievously.”

“There are few couples as unhappy as those who are too proud to admit their unhappiness.”

[A murderer about their victim:]
“He was an expert in vicarious death. I should like to have been there to see how he enjoyed the real thing.”

A Taste For Death

“It was one of those perfect English autumnal days which occur more frequently in memory than in life.”

Shroud for a Nightingale

“‘He didn’t want her; he wanted me. Well, you know how it is.’
Dalgliesh did know. This, after all, was the commonest, the most banal of personal tragedies. You loved someone. They didn’t love you. Worse still, in defiance of their own best interests and to the destruction of your peace, they loved another. What would half the world’s poets and novelists do without this universal tragicomedy?”

“The city which lay below was a charnel house built on multi-layered bones centuries older than those which lay beneath the cities of Hamburg or Dresden. Was this knowledge part of the mystery it held for her, a mystery felt most strongly on a bell-chimed Sunday on her solitary exploration of its hidden alleys and squares? Time had fascinated her from childhood, its apparent power to move at different speeds, the dissolution it wrought on minds and bodies, her sense that each moment, all moments past and those to come, were fused into an illusory present which with every breath became the unalterable, indestructible past. In the City of London these moments were caught and solidified in stone and brick, in churches and monuments and in bridges which spanned the grey-brown ever-flowing Thames. She would walk out in spring or summer as early as six o’clock, double-locking the front door behind her, stepping into a silence more profound and mysterious than the absence of noise. Sometimes in this solitary perambulation it seenmed that her own footsteps were muted, as if some part of her were afraid to waken the dead who had walked thse streets and had known the same silence.”

“Benton had a strong interest in helping to ensure that Warren’s home life wasn’t greatly disturbed: his wife was Cornish, and that morning Warren had arrived with six Cornish pasties of remarkable flavour and succulence.”

“With the death of what Sydney Smith described as rational religon and the proponents of what remains sending out such confusing and uncertain messages, all civilised people have to be ethicists. We must work out our own salvation with diligence based on what we believe.”

“The television image sanctified, conferred identity. The more familiar the face, the more to be trusted.”

As quoted in Advice to Writers: A Compendium of Quotes, Anecdotes, and Writerly Wisdom from a Dazzling Array of Literary Lights (ed., Jon Winokur):

“Learn to write by doing it. Read widely and wisely. Increase your word power. Find your own individual voice though practicing constantly. Go through the world with your eyes and ears open and learn to express that experience in words.”

Find more quotes by P.D. James on Wikiquote and Goodreads.