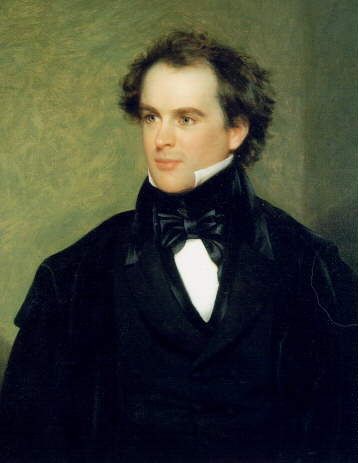 He was born in 1804 in Salem, Massachusetts to Nathaniel Hathorne and the former Elizabeth Clarke Manning. His ancestors include John Hathorne, the only judge involved in the Salem witch trials who never repented of his actions. Nathaniel later added a “w” to make his name “Hawthorne” in order to hide this relation. He entered Bowdoin College in 1821, was elected to Phi Beta Kappa in 1824, and graduated in 1825. Hawthorne published his first work, a novel titled Fanshawe, in 1828; he later tried to suppress it, feeling it was not equal to the standard of his later work. He published several short stories in various periodicals which he collected in 1837 as Twice-Told Tales. The next year, he became engaged to Sophia Peabody. He worked at a Custom House and joined Brook Farm, a transcendentalist community, before marrying Peabody in 1842. The couple moved to The Old Manse in Concord, Massachusetts, later moving to Salem, the Berkshires, then to The Wayside in Concord. The Scarlet Letter was published in 1850, followed by a succession of other novels. A political appointment took Hawthorne and family to Europe before their return to The Wayside in 1860. Hawthorne died on May 19, 1864, and was survived by his wife and their three children.

Much of Hawthorne’s writing centers on New England, many works featuring moral allegories with a Puritan inspiration. His fiction works are considered part of the Romantic movement and, more specifically, Dark romanticism. His themes often center on the inherent evil and sin of humanity, and his works often have moral messages and deep psychological complexity. His published works include novels, short stories, and a biography of his friend Franklin Pierce.

The House of the Seven Gables

“He had that sense, or inward prophecy, – which a young man had better never have been born than not to have, and a mature man had better die at once than utterly to relinquish, – that we are not doomed to creep on forever in the old bad way, but that, this very now, there are harbingers abroad of a golden era, to be accomplished in his own lifetime.”

Find more quotes by Nathaniel Hawthorne on Wikiquote and Goodreads.