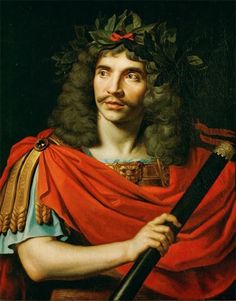 Jean-Baptiste Poquelin, known by his stage name Molière, (Paris, France, baptised January 15, 1622 – Paris, France, February 17, 1673) was a French playwright and actor who is considered to be one of the greatest masters of comedy in Western literature. Among Molière’s best-known works are Le Misanthrope (The Misanthrope), L’école des Femmes (The School for Wives), Tartuffe ou L’Imposteur (Tartuffe or the Imposter), L’Avare (The Miser), Le Malade Imaginaire (The Imaginary Invalid), and Le Bourgeois Gentilhomme (The Bourgeois Gentleman).

Born into a prosperous family and having studied at the Collège de Clermont (now Lycée Louis-le-Grand), Molière was well suited to begin a life in the theatre. Thirteen years as an itinerant actor helped him polish his comic abilities while he began writing, combining Commedia dell’arte elements with the more refined French comedy.

Through the patronage of a few aristocrats, including Philippe I, Duke of Orléans – the brother of Louis XIV – Molière procured a command performance before the King at the Louvre. Performing a classic play by Pierre Corneille and a farce of his own, Le Docteur Amoureux (The Doctor in Love), Molière was granted the use of Salle du Petit-Bourbon near the Louvre, a spacious room appointed for theatrical performances. Later, Molière was granted the use of the Palais-Royal. In both locations he found success among the Parisians with plays such as Les Précieuses ridicules (The Affected Ladies), L’école des Maris (The School for Husbands) and L’école des Femmes (The School for Wives). This royal favor brought a royal pension to his troupe and the title “Troupe du Roi” (The King’s Troupe). Molière continued as the official author of court entertainments.

Though he received the adulation of the court and Parisians, Molière’s satires attracted criticism from moralists and the Roman Catholic Church. Tartuffe ou L’Imposteur (Tartuffe or the Imposter) and its attack on religious hypocrisy roundly received condemnations from the Church, while Don Juan was banned from performance. Molière’s hard work in so many theatrical capacities began to take its toll on his health and, by 1667, he was forced to take a break from the stage. In 1673, during a production of his final play, Le Malade Imaginaire (The Imaginary Invalid), Molière, who suffered from pulmonary tuberculosis, was seized by a coughing fit and a haemorrhage while playing the hypochondriac Argan. He finished the performance but collapsed again and died a few hours later.

Molière is considered the creator of modern French comedy. Many words or phrases used in Molière’s plays are still used in current French: A “tartuffe,” for example, is a hypocrite, especially a hypocrite displaying affected morality or religious piety; and an “harpagon,” named after the main character of The Miser, is an obsessively greedy and cheap man.

Though conventional thinkers, religious leaders, and medical professionals in Molière’s time criticized his work, their ideas did not really impact his widespread success with the public. Other playwrights and companies began to emulate his dramatic style in England and in France. Molière’s works continued to garner positive feedback in 18th century England, but they were not so warmly welcomed in France at this time. However, during the French Restoration of the 19th century, Molière’s comedies became popular with both the French public and the critics. Romanticists admired his plays for the unconventional individualism they portrayed. 20th century scholars have carried on this interest in Molière and his plays and have continued to study a wide array of issues relating to this playwright. Many critics now are shifting their attention from the philosophical, religious, and moral implications in his comedies to the more objective study of his comic technique.

Read more about Molière on Wikipedia.

“It infuriates me to be wrong when I know I’m right.”

Find more quotes by Molière on Wikiquote and Goodreads.