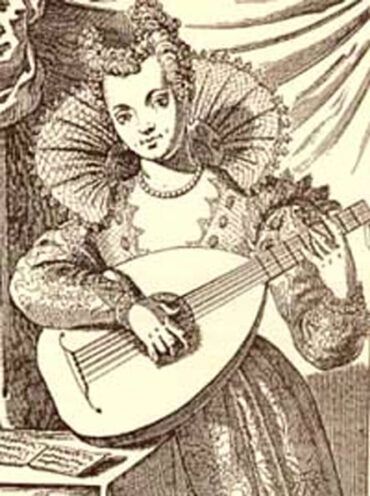 Moderata Fonte, pseudonym of Modesta di Pozzo di Forzi (or Zorzi), also known as Modesta Pozzo, (Venice, ca. 1555 – 1592) was a Venetian writer and poet.  Her chosen pen name is metonymic; “Moderata Fonte” and “Modesta Pozzo” mean exactly the same thing (modest fountain).  Besides the posthumously-published dialogues, Giustizia delle donne and Il Merito delle donne (gathered in The Worth of Women, 1600), for which she is best known, she wrote a romance and religious poetry. Details of her life are known from the biography by Giovanni Niccolò Doglioni (1548-1629), her uncle, included as a preface to the dialogues.

A reputed child prodigy, Fonte had been taught reading, writing, Latin and composition by her maternal grandmother’s second husband, Prospero Saraceni (a man of letters), and by her brother Leonardo.  One of her first known works is a musical play performed before the Doge Da Ponte in 1581 at the festival of St. Stephen’s Day. Le Feste [The Feasts] includes about 350 verses with several singing parts. Also in 1581, she published her epic poem I tredici canti del Floridoro [The Thirteen Cantos of Floridoro] dedicated to Bianca Cappello and her new husband, Francesco I de’ Medici, the Grand Duke of Tuscany. This poem is the second chivalric work published by an Italian woman, after Tullia d’Aragona’s Il Meschino, which appeared in 1560.

Moderata Fonte wrote two long religious poems, La Passione di Cristo [The Passion of Christ] and La Resurrezione di Gesù Cristo nostro Signore che segue alla Santissima Passione in otava rima da Moderata Fonte [The Resurrection of Jesus Christ, our Lord, which follows the Holy Passion in octaves by Moderata Fonte]. In these works she describes in detail the emotional reactions of the Virgin Mary and Mary Magdalen to Christ’s death and resurrection, illustrating her deep belief in the active participation of women in the events of the Passion and Resurrection of Christ.

She is perhaps best known for the two texts jointly published, posthumously in 1600 — Giustizia delle donne and Il Merito delle donne — in which she criticizes the treatment of women by men while celebrating women’s virtues and intelligence and arguing that women are superior to men, but does not go as far as to appeal for sexual equality.  The work is a forerunner of the debate geared towards bringing awareness to the roles of men and women in society, the so-called querelle des femmes.  Fonte’s own marriage was, by all accounts, happy; and unusually for the time, her husband even returned her dowry to her for her own management, so in her writing Fonte was not venting a personal grievance but arguing from principle and rational analysis.

Both Giustizia delle donne and Il Merito delle donne are influenced by Boccaccio’s Decameron: they are frame stories where the characters develop their dialogues and exempla.  The most significant literary devices employed are irony, paradoxes and references to the reader (a “breaking the fourth wall” technique well established for centuries).  Fonte was clearly also influenced by the rhythm and structure of Plato’s dialogues.  In all, her texts comprise a detailed portrait of 16th century social concerns.  At the same time, Fonte breaks the tradition of a literary dialogue silencing or excluding women by creating a text in which men are completely absent.  In the conversation taking place here, the worth of women is not questioned; rather, the worth of men is put on trial.  Il Merito delle donne also demonstrates what it means to become a renaissance woman through intellectual understanding and female friendship, as well as calling on women to be aware of their own value and dignity, and to become politically autonomous individuals.  Yet, even here, the space to speak freely is temporary and borrowed: eventually, the women have to leave the garden where their conversation takes place and return home.  In this sense, the garden setting represents an idealized society where women are autonomous and free to think and act as they want to.

Fonte’s transgressive analysis, in turn, influenced modern thinking and understanding of feminism in its historical context.  She only completed her manuscript on the day before giving birth to her fourth child, a daughter, in 1592; an event that she herself did not survive.  While the more immediate concern of women at the time of the writing was women’s (nonexistent) right to manage their own property, Fonte’s writing speaks to larger and more fundamental concerns, including women’s position in society and gender relations as such, and has more recently been reevaluated in this light.

The Worth of Women

“Do you really believe … that everything historians tell us about men – or about women – is actually true? You ought to consider the fact that these histories have been written by men, who never tell the truth except by accident.”

“[M]en, though they know full well how much women are worth and how great the benefits we bring them, nonetheless seek to destroy us out of envy for our merits. It’s just like the crow, when it produces white nestlings: it is so stricken by envy, knowing how black it is itself, that it kills its own offspring out of pique.”

“Men were created before women. … But that doesn’t prove their superiority – rather, it proves ours, for they were born out of the lifeless earth in order that we could be born out of living flesh. And what’s so important about this priority in creation, anyway? When we are building, we lay foundations on the ground first, things of no intrinsic merit or beauty, before subsequently raising up sumptuous buildings and ornate palaces. Lowly seeds are nourished in the earth, and then later the ravishing blooms appear; lovely roses blossom forth and scented narcissi.”

“When you hear men talking,” said Cornelia, “all they ever do is speak ill of women. … And I don’t quite know how they managed to make this law in their favour, or who exactly it was who gave them a greater license to sin than is allowed to us; and if the fault is common to both sexes (as they can hardly deny), why should the blame not be as well? What makes them think they can boast of the same thing that in women brings only shame?”

“It really is something … that men disapprove even of our doing things that are patently good. Wouldn’t it be possible for us just to banish these men from our lives, and escape their carping and jeering once and for all? Couldn’t we live without them? Couldn’t we earn our living and manage our affairs without help from them? Come on, let’s wake up, and claim back our freedom, and the honour and dignity that they have usurped from us for so long. Do you think that if we really put our minds to it, we would be lacking the courage to defend ourselves, the strength to fend for ourselves, or the talents to earn our own living? Let’s take our courage into our hands and do it, and then we can leave it up to them to mend their ways as much as they can: we shan’t really care what the outcome is, just as long as we are no longer subjugated to them.”

“[I]t was with a good end in mind – that of acquiring the knowledge of good and evil – that Eve allowed herself to be carried away and eat the forbidden fruit. But Adam was not moved by this desire for knowledge, but simply by greed: he ate it because he heard Eve say it tasted good.”

“This pre-eminence is something [men] have unjustly arrogated to themselves. And when it’s said that women must be subject to men, the phrase should be understood in the same sense as when we say we are subject to natural disasters, diseases, and all the other accidents of this life: it’s not a case of being subjected in the sense of obeying, but rather of suffering an imposition, not a case of serving them fearfully, but rather of tolerating them in a spirit of Christian charity, since they have been given to us by God as a spiritual trial.”