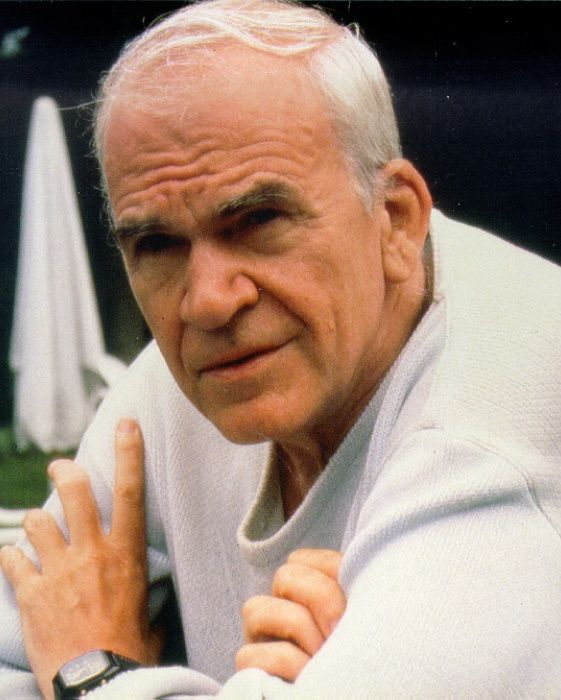 Milan Kundera (born Brno, Czechoslovakia [today: Czech Republic], April 1, 1929) is the Czech Republic’s most recognized living writer, even though he has lived in exile in France since 1975, having become a naturalised citizen in 1981.

Kundera’s best-known work is The Unbearable Lightness of Being. His books were banned by the Communist regimes of Czechoslovakia until the downfall of the regime in the Velvet Revolution of 1989. Although his early poetic works are staunchly pro-communist, his novels escape ideological classification. Kundera has repeatedly insisted on being considered a novelist, rather than a political or dissident writer. Political commentary has all but disappeared from his novels (starting specifically after The Unbearable Lightness of Being) except in relation to broader philosophical themes. – Originally, Kundera wrote in Czech. From 1993 onwards, he has written his novels in French. Between 1985 and 1987 he undertook the revision of the French translations of his earlier works. As a result, all of his books exist in French with the authority of the original. Kundera’s style of fiction, interlaced with philosophical digression, greatly inspired by the novels of Robert Musil and the philosophy of Nietzsche, is also used by authors Alain de Botton and Adam Thirlwell. He takes his inspiration from sources ranging from the Renaissance authors Giovanni Boccaccio and Rabelais to Laurence Sterne, Henry Fielding, Denis Diderot, Robert Musil, Witold Gombrowicz, Hermann Broch, Franz Kafka, Martin Heidegger, and perhaps most importantly, Miguel de Cervantes, to whose legacy he considers himself most committed.

Kundera’s characters are often explicitly identified as figments of his own imagination, in that he comments in the first-person on the characters in entirely third-person stories. According to his own statements, Kundera is more concerned with the words that shape or mould his characters than with the characters’ physical appearance: in his non-fiction work, The Art of the Novel, he says that the reader’s imagination automatically completes the writer’s vision. He, as the writer, wishes to focus on the essential insofar as the physical is not critical to an understanding of the character. For him the essential may not include the physical appearance or even the interior world (the psychological world) of his characters. Other times, a specific feature or trait may become the character’s idiosyncratic focus.

Kundera’s themes and meta-themes exist across his entire oeuvre, in which each new book manifests the latest stage of his personal philosophy. Some of these meta-themes include exile, identity, life beyond the border (beyond love, beyond art, beyond seriousness), history as continual return, and the pleasures of leading a less notable/more ordinary life. Many of Kundera’s characters are intended as expositions of one of these themes at the expense of their fully developed humanity. Specifics in regard to the characters tend to be rather vague. Often, more than one main character is used in a novel, even to the extent of completely discontinuing a character and resuming the plot with a brand new character. Kundera’s early novels explore the dual tragic and comic aspects of totalitarianism. He does not view his works, however, as political commentary, as he feels that the condemnation of totalitarianism doesn’t deserve a novel. Rather, what he finds interesting is the similarity between totalitarianism and the dream of a harmonious society where private life and public life form a single unity and all are united around one will and one faith. In exploring the dark humor of this topic, Kundera is noticeably influenced by Franz Kafka.

Kundera considers himself to be a writer without a message. For example, in The Sixty-three Words, a chapter in The Art of the Novel, Kundera recounts an episode when a Scandinavian publisher hesitated about going ahead with the publication of The Farewell Party because of the apparent anti-abortion message contained in the novel. Kundera explains that not only was the publisher wrong about the existence of such a message in the work, but, “I was delighted with the misunderstanding. I had succeeded as a novelist. I succeeded in maintaining the moral ambiguity of the situation. I had kept faith with the essence of the novel as an art: irony. And irony doesn’t give a damn about messages!”

Kundera lives virtually incognito and rarely speaks to the media. A perennial contender for the Nobel Prize in Literature, he has been nominated on several occasions, and has received numerous other awards. These include the Jerusalem Prize (1985) – his acceptance address for which is printed in his essay collection The Art of the Novel – as well as the Czech State Literature Prize (2007), the Austrian State Prize for European Literature (1987), the Romanian Ovid Prize (2011), the Los Angeles Times “Best Work of Fiction” award for The Unbearable Lightness of Being (1984), and the Prix Médicis Étranger for Life is Elsewhere. In 2000, he was awarded the international Herder Prize, which is presented to scholars and artists from Central and Southeastern Europe whose life and work have improved the cultural understanding of European countries and their peaceful interrelations. In 2010, he was made an honorary citizen of his hometown, Brno. The asteroid 7390 Kundera, discovered at the Kleť Observatory in 1983, is named in his honor.

“Unlike the puerile loyalty to a conviction, loyalty to a friend is a virtue – perhaps the only virtue, the last remaining one.”

The Unbearable Lightness of Being

“When the heart speaks, the mind finds it indecent to object.”

Find more quotes by Milan Kundera on Wikiquote and Goodreads.