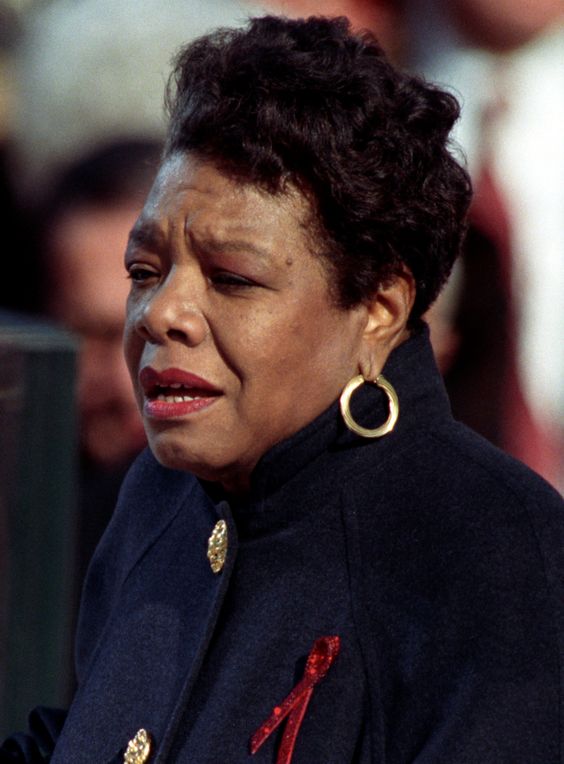 Maya Angelou (born Marguerite Annie Johnson; St. Louis, MO, USA, April 4, 1928 – Winston-Salem, NC, USA, May 28, 2014) was an American poet, memoirist, and civil rights activist. She published seven autobiographies, three books of essays, several books of poetry, and is credited with a list of plays, movies, and television shows spanning over 50 years. She received dozens of awards and more than 50 honorary degrees. Angelou is best known for her series of seven autobiographies, which focus on her childhood and early adult experiences. The first, I Know Why the Caged Bird Sings (1969), tells of her life up to the age of 17 and brought her international recognition and acclaim.

She became a poet and writer after a string of odd jobs during her young adulthood. These included fry cook, sex worker, nightclub performer, Porgy and Bess cast member, Southern Christian Leadership Conference coordinator, and correspondent in Egypt and Ghana during the decolonization of Africa. She was also an actress, writer, director, and producer of plays, movies, and public television programs. In 1982, she was named the first Reynolds Professor of American Studies at Wake Forest University in Winston-Salem, North Carolina. She was active in the Civil Rights Movement and worked with Martin Luther King Jr. and Malcolm X. Beginning in the 1990s, she made approximately 80 appearances a year on the lecture circuit, something she continued into her eighties. In 1993, Angelou recited her poem “On the Pulse of Morning” (1993) at the first inauguration of Bill Clinton, making her the first poet to make an inaugural recitation since Robert Frost at the inauguration of John F. Kennedy in 1961.

With the publication of I Know Why the Caged Bird Sings, Angelou publicly discussed aspects of her personal life. She was respected as a spokesperson for Black people and women, and her works have been considered a defense of Black culture. Her works are widely used in schools and universities worldwide, although attempts have been made to ban her books from some US libraries. Angelou’s most celebrated works have been labeled as autobiographical fiction, but many critics consider them to be autobiographies. She made a deliberate attempt to challenge the common structure of the autobiography by critiquing, changing and expanding the genre. Her books center on themes including racism, identity, family and travel.

President of the United States

National Association for the Advancement of Colored People (NAACP) (USA)

Hope for Peace and Justice Center

Appearances as a Stage and Screen Actress

I Know Why the Caged Bird Sings

“There is no greater agony than bearing an untold story inside you.”

“The needs of a society determine its ethics.”

Gather Together in My Name

“Self-pity in its early stages is as snug as a feather mattress. Only when it hardens does it become uncomfortable.”

“The ache for home lives in all of us. The safe place where we can go as we are and not be questioned.”

Wouldn’t Take Nothing for My Journey Now

“Each of us has the right and the responsibility to assess the roads which lie ahead, and those over which we have traveled, and if the future road looms ominous or unpromising, and the roads back uninviting, then we need to gather our resolve and, carrying only the necessary baggage, step off that road into another direction. If the new choice is also unpalatable, without embarrassment, we must be ready to change that as well.”

“A person is the product of their dreams. So make sure to dream great dreams. And then try to live your dream.”

“Perhaps travel cannot prevent bigotry, but by demonstrating that all peoples cry, laugh, eat, worry, and die, it can introduce the idea that if we try and understand each other, we may even become friends.”

“Since time is the one immaterial object which we cannot influence – neither speed up nor slow down, add to nor diminish – it is an imponderably valuable gift.”

Letter to My Daughter

“You may not control all the events that happen to you, but you can decide not to be reduced by them.”

“The charitable say in effect, ‘I seem to have more than I need and you seem to have less than you need. I would like to share my excess with you.’ Fine, if my excess is tangible, money or goods, and fine if not, for I learned that to be charitable with gestures and words can bring enormous joy and repair injured feelings.”

“We may act sophisticated and worldly but I believe we feel safest when we go inside ourselves and find home, a place where we belong and maybe the only place we really do.”

“Independence is a heady draft, and if you drink it in your youth, it can have the same effect on the brain as young wine does. It does not matter that its taste is not always appealing. It is addictive and with each drink you want more.”

“I want you to learn that you cannot have anything without working for it. The only way you can be taken advantage of is if you think you can get something for nothing.”

As quoted in A Conversation with Dr. Maya Angelou, Beautifully Said Magazine, July 2012:

“We delight in the beauty of the butterfly, but rarely admit the changes it has gone through to achieve that beauty.”

“What I try to do is write. I may write for two weeks ‘the cat sat on the mat, that is that, not a rat,’ … And it might be just the most boring and awful stuff. But I try. When I’m writing, I write. And then it’s as if the muse is convinced that I’m serious and says, ‘Okay. Okay. I’ll come.”

Find more quotes by Maya Angelou on Wikiquote and Goodreads.