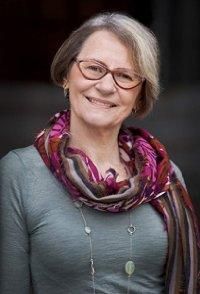 Mary Novik (born 1945 in Victoria, BC, Canada) is a Canadian novelist specializing in historical fiction.

Before turning to writing full time, Novik taught literature and creative writing at Langara College in Vancouver and wrote reviews and articles on poetry.  She now belongs to the fiction writing group, SPiN.

Novik’s debut novel, Conceit (2007), is about Pegge Donne, the daughter of the Metaphysical poet John Donne, and is set in 17th century London.  The novel examines women’s lives in the  Stuart era, as well as the emergence of Donne’s works, and also features fictional versions of Donne’s wife Ann More, Samuel Pepys, and Izaak Walton. Conceit won the Ethel Wilson Fiction Prize and was nominated for the Scotiabank Giller Prize. It was chosen as a Book of the Year by both The Globe and Mail and Quill & Quire. Canada Reads named Conceit one of the Top 40 Essential Canadian Novels of the Decade.

Mary Novik’s second novel, Muse (2013), similarly examines the circumstances surrounding the creation of venerated works of art: in this case, the love sonnets of the Italian bard, Petrarch.  Here, Solange Le Blanc, a fictional narrator inspired by the unidentified mother of Petrarch’s children, is posited as the poet’s muse. The novel is set in 14th-century Avignon in the time of the popes.

The Globe and Mail

“St Paul’s cathedral stands like a cornered beast on Ludgate hill, taking deep breaths above the smoke.  The fire has made terrifying progress in the night and is closing in on the ancient monument from three directions.  Built of massive stones, the cathedral is held to be invincible, but suddenly Pegge sees what the flames covet: the two hundred and fifty feet of scaffolding erected around the broken tower.  Once the flames have a foothold on the wooden scaffolds,, they can jump to the lead roof, and once the timbers burn and the vaulting cracks, the cathedral will be toppled by its own mass, a royal bear brought down by common dogs.”