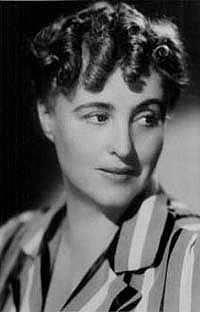 Margery Louise Allingham (20 May 1904 – 30 June 1966) was an English novelist from the “Golden Age of Detective Fiction”, best remembered for her hero, the gentleman sleuth Albert Campion.

Initially believed to be a parody of Dorothy L. Sayers’s detective Lord Peter Wimsey, Campion matured into a strongly individual character, part-detective, part-adventurer, who formed the basis for 18 novels and many short stories.

While she was enrolled at the Regent Street Polytechnic she wrote a verse play, Dido and Aeneas, which was performed at St. George’s Hall, London, and the Cripplegate Theatre, London. Allingham played the role of Dido and the scenery was designed by her husband-to-be Philip Youngman Carter (they married in 1927).

Her first novel, Blackkerchief Dick, was published in 1923, when she was 19.  It was well received, but was not a financial success.

Her breakthrough occurred in 1929 with the publication of The Crime at Black Dudley. This introduced Albert Campion, initially as a minor character, thought to be a parody of Dorothy Sayers’s Lord Peter Wimsey.  Campion returned in Mystery Mile, thanks in part to pressure from her American publishers, who had been taken with the character.  With a strong central character and a format to work in, she began to produce a series of Campion novels. At first she also continued writing short stories and articles for magazines such as The Strand Magazine, but as her Campion saga went on her sales grew steadily. Campion proved so successful that Allingham made him the centrepiece of another 17 novels and more than 20 short stories, continuing into the 1960s.  Campion is a mysterious upper-class character (early novels hint that his family is in the line of succession to the throne), working under an assumed name. He floats between the upper echelons of the nobility and government on the one hand, and the shady world of the criminal class on the other, often accompanied by his scurrilous ex-burglar servant Magersfontein Lugg. During the course of his career Campion is sometimes a detective, sometimes an adventurer.

In 1941 Allingham published a non-fiction work, The Oaken Heart, which describes her experiences in Essex when an invasion from Germany was expected and actively being planned for, potentially placing the civilian population of Essex in the front line.

Other Short Stories and Novellas

Autobiography and Other Nonfiction

Look to the Lady

“The process of elimination, combined with a modicum of common sense, will always assist us to arrive at the correct conclusion with the maximum of possible accuracy and the minimum of hard labor. Which being translated means: I guessed it.”

Police at the Funeral

“He used to be a burglar, you know. It’s the old story – lost his figure. As he says himself, it cramps your style when your only means of exit are the double doors in the front hall.”

“When Mr. William Faraday sat down to write his memoirs after fifty-eight years of blameless inactivity he found the work of inscribing the history of his life almost as tedious as living it had been, and so, possessing a natural invention coupled with a gift for locating the easier path, he began to prevaricate a little upon the second page, working his way up to downright lying on the sixth and subsequent folios.”

The Tiger in the Smoke

“Lying wastes more time than anything else in the modern world.”

The Case of the Late Pig

“THE main thing to remember in autobiography, I have always thought, is not to let any damned modesty creep in to spoil the story. This adventure is mine, Albert Campion’s, and I am fairly certain that I was pretty nearly brilliant in it in spite of the fact that I so nearly got myself and old Lugg killed that I hear a harp quintet whenever I consider it.”

The Crime at Black Dudley

“George Abbershaw’s prosaic mind quivered on the verge of poetry when he looked at her.”

The Fashion in Shrouds

“Superintendent Stanislaus Oates of the Central Investigation Department, New Scotland Yard, was one of those happy people who retain throughout their lives a childlike belief in a sharp dividing line between that which is wrong and that which is right. It is this peculiarity which is common to all the great English policemen and is probably the basis of their reputation both for integrity and for stupidity.”

“Truth is such a naked lady,” Mr. Campion spoke softly. “Apparently in well-regulated country families no one is so indelicate as to stare at all of her at once.”

Find more quotes by Margery Allingham on Wikiquote and Goodreads.