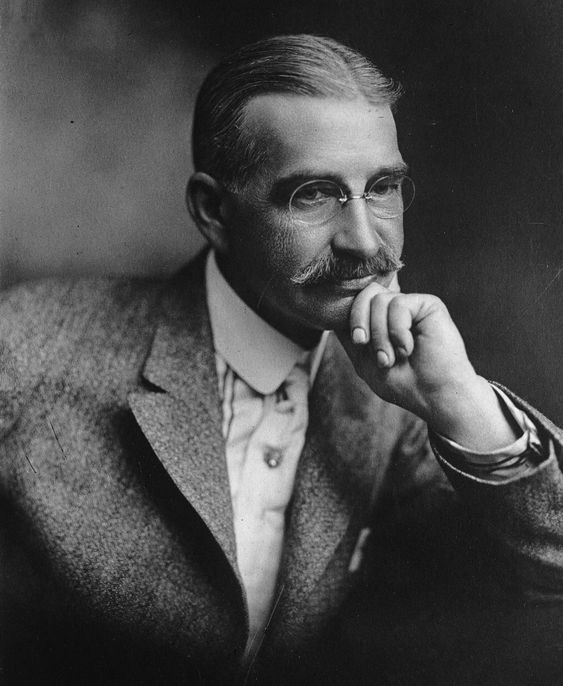 Lyman Frank Baum (Chittenango, NY, USA, May 15, 1856 – Los Angeles, CA, USA, May 6, 1919) was an American author known for his children’s books, particularly The Wonderful Wizard of Oz and its sequels. He wrote 14 novels in the Oz series, plus 41 other novels (not including four lost, unpublished novels), 83 short stories, over 200 poems, and at least 42 movie scripts. He made numerous attempts to bring his works to the stage and screen; the 1939 adaptation of the first Oz book became a landmark of 20th-century cinema.

Born and raised in upstate New York, Baum moved west after an unsuccessful stint as a theater producer and playwright. He and his wife opened a store in South Dakota and he edited and published a newspaper. They then moved to Chicago, where he worked as a newspaper reporter and published children’s literature, coming out with the first Oz book in 1900. While continuing his writing, among his final projects he sought to establish a movie studio focused on children’s films in Los Angeles, California.

His works anticipated such later commonplaces as television, augmented reality, laptop computers (The Master Key), wireless telephones (Tik-Tok of Oz), women in high-risk and action-heavy occupations (Mary Louise in the Country), and the ubiquity of clothes advertising (Aunt Jane’s Nieces at Work).

Other Lands around Oz

The Wonderful Wizard of Oz

“Some people without brains do an awful lot of talking, don’t you think?”

“‘You have plenty of courage, I am sure,’ answered Oz. ‘All you need is confidence in yourself. There is no living thing that is not afraid when it faces danger. The true courage is in facing danger when you are afraid, and that kind of courage you have in plenty.'”

“My people have been wearing green glasses on their eyes for so long that most of them think this really is an Emerald City.”

The Lost Princess of Oz

“No thief, however skillful, can rob one of knowledge, and that is why knowledge is the best and safest treasure to acquire.”

The Marvelous Land of Oz

“As they passed the rows of houses they saw through the open doors that men were sweeping and dusting and washing dishes, while the women sat around in groups, gossiping and laughing.
‘What has happened?’ the Scarecrow asked a sad-looking man with a bushy beard, who wore an apron and was wheeling a baby carriage along the sidewalk.
‘Why, we’ve had a revolution, your Majesty – as you ought to know very well,’ replied the man; ‘and since you went away the women have been running things to suit themselves. I’m glad you have decided to come back and restore order, for doing housework and minding the children is wearing out the strength of every man in the Emerald City.’
‘Hm!’ said the Scarecrow, thoughtfully. ‘If it is such hard work as you say, how did the women manage it so easily?’
‘I really do not know,’ replied the man, with a deep sigh. ‘Perhaps the women are made of cast-iron.'”

“How very wet this water is.”

“As a matter of fact, we are none of us above criticism; so let us bear with each other’s faults.”

The Road to Oz

“‘You have some queer friends, Dorothy,’ she said.
‘The queerness doesn’t matter, so long as they’re friends,’ was the answer.”

The Scarecrow of Oz

“No Queen with a frozen heart is fit to rule any country.”

“If we didn’t want anything, we would never get anything, good or bad. I think our longings are natural, and if we act as nature prompts us we can’t go far wrong.”

“Oh, if Shakespeare says it, that’s all right.”

“Familiarity with any great thing removes our awe of it.”