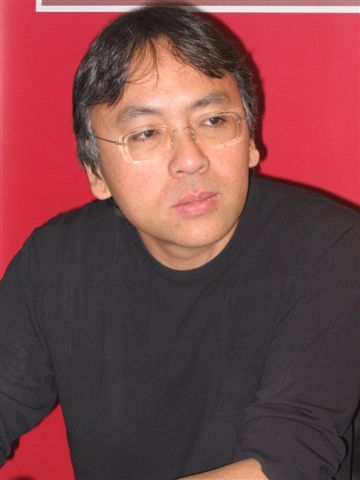 Sir Kazuo Ishiguro OBE FRSA FRSL (born in Nagasaki, Japan, 8 November 8, 1954) is a British novelist, screenwriter, musician, and short-story writer. His family moved to Britain from Japan in 1960 when he was five.

Ishiguro is one of the most celebrated contemporary fiction authors in English.  Frequently concerned with the unreliability of memory, Ishiguro’s fiction is set in England, Japan, and other locations (Shanghai, Italy, Central Europe), and spans periods from Arthurian Britain (The Buried Giant) to a postmodern and dystopian societies with overtones of science fiction (Never Let Me Go; Klara and the Sun). Ishiguro has received numerous literary awards and distinctions, including the Royal Society’s Winnifred Holtby Memorial Prize for his debut novel A Pale View of Hills, a Whitbread (now Costa) Best Novel Award for his second book, An Artist of the Floating World, and, among four Man Booker Prize nominations, won that latter award in 1989 for his third novel, The Remains of the Day. Time magazine named Ishiguro’s sixth novel, Never Let Me Go, the best novel of 2005 and one of the 100 best English-language novels published since 1923.  The Remains of the Day and Never Let Me Go were adapted into movies in 1993 and 2010 respectively, starring Emma Thompson, Anthony Hopkins, James Fox, Christopher Reeve, Peter Vaughan, Hugh Grant, Michael Lonsdale, and Tim Pigott-Smith (The Remains of the Day) and Carey Mulligan, Keira Knightley, and Andrew Garfield (Never Let Me Go).

In 2017, the Swedish Academy awarded Ishiguro the Nobel Prize in Literature, describing him in its citation as a writer “who, in novels of great emotional force, has uncovered the abyss beneath our illusory sense of connection with the world”.

“More fundamentally, I’m interested in memory because it’s a filter through which we see our lives, and because it’s foggy and obscure, the opportunities for self-deception are there. In the end, as a writer, I’m more interested in what people tell themselves happened rather than what actually happened.”

“There was another life that I might have had, but I am having this one.”

“Memories, even your most precious ones, fade surprisingly quickly. But I don’t go along with that. The memories I value most, I don’t ever see them fading.”

“What I’m not sure about, is if our lives have been so different from the lives of the people we save. We all complete. Maybe none of us really understand what we’ve lived through, or feel we’ve had enough time.”

“You say you’re sure? Sure that you’re in love? How can you know it? You think love is so simple? “

“I saw a new world coming rapidly. More scientific, efficient, yes. More cures for the old sicknesses. Very good. But a harsh, cruel, world. And I saw a little girl, her eyes tightly closed, holding to her breast the old kind world, one that she knew in her heart could not remain, and she was holding it and pleading, never to let her go.”

“‘You see, because [Norfolk is] stuck out here on the east, on this hump jutting into the sea, it’s not on the way to anywhere. People going north and south, they bypass it altogether. For that reason, it’s a peaceful corner of England, rather nice. But it’s also something of a lost corner.’
Someone claimed after the lesson that Miss Emily had said Norfolk was England’s ‘lost corner’ because that was were all the lost property found in the country ended up.
Ruth said one evening, looking out at the sunset, that ‘when we lost something precious, and we’d looked and looked and still couldn’t find it, then we didn’t have to be completely heartbroken. We still had that last bit of comfort, thinking one day, when we were grown up, and we were free to travel the country, we could always go and find it again in Norfolk.'”

“Maybe all of us at Hailsam had little secrets like that – little private nooks created out of thin air where we could go off alone without fears and longing.”

The Remains of the Day

“The evening’s the best part of the day. You’ve done your day’s work. Now you can put your feet up and enjoy it.”

“If you are under the impression you have already perfected yourself, you will never rise to the heights you are no doubt capable of.”

“I do not think I responded immediately, for it took me a moment or two to fully digest these words of Miss Kenton. Moreover, as you might appreciate, their implications were such as to provoke a certain degree of sorrow within me. Indeed – why should I not admit it? – at that moment, my heart was breaking.”

“He chose a certain path in life, it proved to be a misguided one, but there, he chose it, he can say that at least. As for myself, I cannot even claim that. You see, I trusted. I trusted in his lorship’s wisdom. All those years I served him, I trusted I was doing something worthwhile. I can’t even say I made my own mistakes. Really – one has to ask oneself – what dignity is there in that?”

“After all, what can we ever gain in forever looking back and blaming ourselves if our lives have not turned out quite as we might have wished?”

“What is pertinent is the calmness of beauty, its sense of restraint. It is as though the land knows of its own beauty, its own greatness, and feels no need to shout it.”

“But there is no virtue at all in clinging as some do to tradition merely for its own sake.”

When We Were Orphans

“Perhaps there are those who are able to go about their lives unfettered by such concerns. But for those like us, our fate is to face the world as orphans, chasing through long years the shadows of vanished parents. There is nothing for it but to try and see through our missions to the end, as best we can, for until we do so, we will be permitted no calm.”

“Everything might scatter. You might be right. I suppose it’s something we can’t easily get away from. People need to feel they belong. To a nation, to a race. Otherwise, who knows what might happen? This civilisation of ours, perhaps it’ll just collapse. And everything scatter, as you put it.”

“It’s all right. I’m not upset. After all, they were just *things*. When you’ve lost your mother and your father, you can’t care so much about *things*, can you?”

“Perhaps one day, all these conflicts will end, and it won’t be because of great statesmen or churches or organisations like this one. It’ll be because people have changed. They’ll be like you, Puffin. More a mixture. So why not become a mongrel? It’s healthy.”

An Artist of the Floating World

“An artist’s concern is to capture beauty wherever he finds it.”

“‘It’s hard to appreciate the beauty of a world when one doubts its very validity … But I’ve long since lost all such doubts, Ono,’ he continued. ‘When I am an old man, when I look back over my life and see I have devoted it to the task of capturing the unique beauty of that world, I believe I will be well satisfied. And no man will make me believe I’ve wasted my time.'”

“[W]e have the satisfaction of knowing that whatever we did, we did at the time in the best of faith. Of course, we took some bold steps and often did things with much single-mindedness; but this is surely preferable to never putting one’s convictions to the test, for lack of will or courage.”

A Pale View of Hills

“Memory, I realize, can be an unreliable thing; often it is heavily coloured by the circumstances in which one remembers.”

“Chess is all about maintaining coherent strategies. It’s about not giving up when the enemy destroys one plan but to immediately come up with the next. A game isn’t won and lost at the point when the king is finally cornered. The game’s sealed when a player gives up having any strategy at all. When his soldiers are all scattered, they have no common cause, and they move one piece at a time, that’s when you’ve lost.”

Klara and the Sun

“One should not, in any case, attempt to make a virtue out of one’s limitations.”

Find more quotes by Kazuo Ishiguro on Wikiquote and Goodreads.