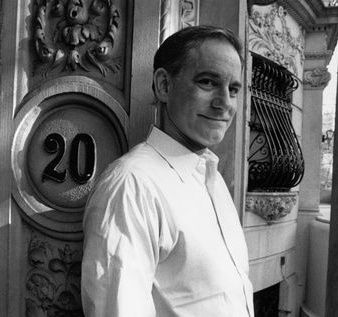 John Berendt (born Syracuse, NY, USA, December 5, 1939) is an American author, known for the best-selling non-fiction book Midnight in the Garden of Good and Evil, which was a finalist for the 1995 Pulitzer Prize in General Nonfiction.

Berendt published Midnight in the Garden of Good and Evil in 1994 and it became an overnight success: the book spent a record-breaking 216 weeks on the New York Times bestseller list – to this day, the longest standing best seller of the Times. The story, unsettling and real, broke down the idea of the quintessential phenomenon of a true American city, only to reveal its quirks: its man walking an invisible dog; its voice of the drag queen; a high-society man in its elite community – all that somehow, unravels a murder mystery. Virtually seeming like a novel and reading like a tale, the non-fictional story is about the real-life events surrounding the multiple murder trials of antiques dealer Jim Williams in Savannah, Georgia.  Berendt has since acknowledged that he fabricated some scenes and changed the sequence of some events. Midnight in the Garden of Good and Evil was adapted into a 1997 film, directed by Clint Eastwood. John Cusack plays a character loosely based on Berendt in the movie; Jim Williams is portrayed by Kevin Spacey.

Berendt’s second book, The City of Falling Angels, was published in September 2005. It chronicles interwoven lives in Venice in the aftermath of the fire that destroyed the La Fenice opera house. According to an August 2005 review by Kirkus Reviews, “Berendt does great justice to an exalted city that has rightly fascinated the likes of Henry James, Robert Browning, and many filmmakers throughout the world.”

Midnight in the Garden of Good and Evil

“Someone once wrote that musicians are touched on the shoulder by God, and I think it’s true. You can make other people happy with music, but you can make yourself happy too. Because of my music, I have never known loneliness and never been depressed.”

[Quoting Miss Harty:]
“People come here from all over the country and fall in love with Savannah. Then they move here and pretty soon they’re telling us how much more lively and prosperous Savannah could be if we only knew what we had and how to take advantage of it. I call these people ‘Gucci carpetbaggers.”

“Keep a diary, but don’t just list all the things you did during the day. Pick one incident and write it up as a brief vignette. Give it color, include quotes and dialogue, shape it like a story with a beginning, middle and end—as if it were a short story or an episode in a novel. It’s great practice. Do this while figuring out what you want to write a book about. The book may even emerge from within this running diary.”