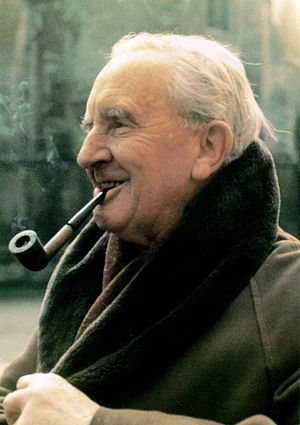 John Ronald Reuel Tolkien, CBE (Bloemfontein, South Africa, January 3, 1892 – Bournemouth, Dorset, England, September 2, 1973) was an English writer, poet, philologist, and university professor, best known as the author of the classic high fantasy works The Hobbit, The Lord of the Rings, and The Silmarillion.

In 1920, Tolkien took up a post as Reader in English Language at the University of Leeds, and became the youngest professor there. While at Leeds, he produced A Middle English Vocabulary and a definitive edition of the Middle English romance Sir Gawain and the Green Knight with E.V. Gordon, both becoming academic standard works for several decades. He also translated the 14th century poems Pearl and Sir Orfeo. In 1925, he returned to Oxford, where he served as Professor of Anglo-Saxon at Pembroke College from 1925 to 1945 and Professor of English Language and Literature at Merton College from 1945 to 1959. He was at one time a close friend of C.S. Lewis – they were both members of the informal literary discussion group known as the Inklings. Tolkien was appointed a Commander of the Order of the British Empire by Queen Elizabeth II on March 28, 1972.

Tolkien enjoyed inventing fantasy stories to entertain his children. He wrote annual Christmas letters from Father Christmas for them, building up a series of short stories (later compiled and published as The Father Christmas Letters). Other stories included Mr. Bliss and Roverandom (inspired by his family’s dog), and Leaf by Niggle (part of Tree and Leaf), The Adventures of Tom Bombadil, On Fairy-Stories, Smith of Wootton Major and Farmer Giles of Ham. Roverandom and Smith of Wootton Major, like The Hobbit, derived ideas from his legendarium; i.e. the fictional universe of Middle Earth in which, particularly, The Lord of the Rings is set, and which is based on Tolkien’s real-world knowlege of Anglo-Saxon beliefs and incorporates the languages that he created, and that are (or were) spoken by the people of Middle Earth.

Tolkien never expected his stories to become popular, but by sheer accident a book called The Hobbit, which he had written some years before for his own children, in 1936 came to the attention of Susan Dagnall, an employee of the London publishing firm George Allen & Unwin, who persuaded Tolkien to submit it for publication. The book attracted adult readers as well as children, and it became popular enough for the publishers to ask Tolkien to produce a sequel.

The request for a sequel prompted Tolkien to begin what would become his most famous work: the epic novel The Lord of the Rings (originally published in three volumes in 1954 – 1955). Tolkien spent more than ten years writing the primary narrative and appendices for The Lord of the Rings, during which time he received the constant support of the Inklings, in particular his closest friend C.S. Lewis, the author of The Chronicles of Narnia. Tolkien at first intended The Lord of the Rings to be a children’s tale in the style of The Hobbit, but it quickly grew darker and more serious in the writing. Though a direct sequel to The Hobbit, it addressed an older audience, drawing on the immense back story of Beleriand that Tolkien had constructed in previous years, and which eventually saw posthumous publication in The Silmarillion and other volumes.

After his death, Tolkien’s son Christopher published a series of works based on his father’s extensive notes and unpublished manuscripts, including The Silmarillion. These, together with The Hobbit and The Lord of the Rings form a connected body of tales, poems, fictional histories, invented languages, and literary essays about a fantasy world called Arda, and Middle-earth within it. Between 1951 and 1955, Tolkien also applied the term legendarium to the larger part of these writings.

While many other authors had published works of fantasy before Tolkien, the great success of The Hobbit and The Lord of the Rings led directly to a popular resurgence of the genre. This has caused Tolkien to be popularly identified as the “father” of modern fantasy literature – or, more precisely, of high fantasy. In the 2003 “Big Read” survey conducted by the BBC, The Lord of the Rings was found to be the UK’s “Best-loved Novel”. In 2002 Tolkien was voted one of the 100 greatest Britons in a poll conducted by the BBC. In 2008, The Times ranked him sixth on a list of “The 50 greatest British writers since 1945”. Forbes ranked him the 5th top-earning dead celebrity in 2009. Both The Hobbit and The Lord of the Rings have repeatedly been adapted for the screen, most notably in two monumental trilogies directed by Sir Peter Jackson (The Lord of the Rings, released in 2001-2003, and The Hobbit, released from 2013 onwards).

“It does not do to leave a live dragon out of your calculations, if you live near him.”

Foreword to “The Lord of the Rings” (2d edition)

“Some who have read the book, or at any rate have reviewed it, have found it boring, absurd, or contemptible, and I have no cause to complain, since I have similar opinions of their works, or of the kinds of writing that they evidently prefer.”

The Fellowship of the Ring

“I wish it need not have happened in my time,” said Frodo.
“So do I,” said Gandalf, “and so do all who live to see such times. But that is not for them to decide. All we have to decide is what to do with the time that is given us.”

“Deserves it! I daresay he does. Many that live deserve death. And some that die deserve life. Can you give it to them? Then do not be too eager to deal out death in judgement. For even the very wise cannot see all ends.”

“Still, I wonder if we shall ever be put into songs or tales. We’re in one, of course, but I mean: put into words, you know, told by the fireside, or read out of a great big book with red and black letters, years and years afterwards. And people will say: “Let’s hear about Frodo and the Ring!” And they will say: “Yes, that’s one of my favourite stories. Frodo was very brave, wasn’t he, dad?” “Yes, my boy, the famousest of the hobbits, and that’s saying a lot.”
‘It’s saying a lot too much,’ said Frodo, and he laughed, a long clear laugh from his heart. Such a sound had not been heard in those places since Sauron came to Middle-earth. To Sam suddenly it seemed as if all the stones were listening and the tall rocks leaning over them. But Frodo did not heed them; he laughed again. ‘Why, Sam,’ he said, ‘to hear you somehow makes me as merry as if the story was already written. But you’ve left out one of the chief characters: Samwise the stouthearted. “I want to hear more about Sam, dad. Why didn’t they put in more of his talk, dad? That’s what I like, it makes me laugh. And Frodo wouldn’t have got far without Sam, would he, dad?”‘
‘Now, Mr. Frodo,’ said Sam, ‘you shouldn’t make fun. I was serious.’
‘So was I,’ said Frodo, ‘and so I am.”

The Return of the King

“What do you fear, lady?” [Aragorn] asked.
“A cage,” [Éowyn] said. “To stay behind bars, until use and old age accept them, and all chance of doing great deeds is gone beyond recall or desire.”

“The world is full enough of hurts and mischances without wars to multiply them.”

Find more quotes by J.R.R. Tolkien on Wikiquote and Goodreads.