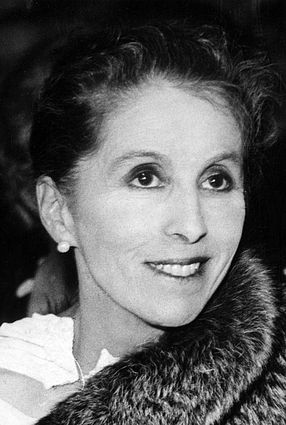 Blixen is best known for Out of Africa, an account of her life while living in Kenya, and for one of her stories, Babette’s Feast, both of which have been adapted into Academy Award-winning motion pictures. She is also noted, particularly in Denmark, for her Seven Gothic Tales. Among her later stories should be mentioned Winter’s Tales (1942), Last Tales (1957), Anecdotes of Destiny (1958) and Ehrengard (1963).

Karen Dinesen was born in the manor house of Rungstedlund, north of Copenhagen.  While still young, Dinesen spent many of her holidays with her paternal cousin’s family, the Blixen-Fineckes, in Skåne in the south of Sweden. She first fell in love with the dashing equestrian baron Hans, but he did not reciprocate. She therefore decided to accept the favours of his twin brother, Baron Bror Blixen-Finecke, and they announced their engagement on December 23, 1912, to the family’s surprise. Given the difficulties both were experiencing in settling in Denmark, the family suggested they should move abroad. Their common uncle, Aage Westenholz (1859–1935) who had made a fortune in Siam, suggested they should go to Kenya to start a coffee farm. He and his sister Ingeborg Dinesen invested 150,000 Danish crowns in the venture.  Early in 1913, Bror left for Kenya; at the time, part of British East Africa. He was followed by his fiancée in December, and they were married in Mombasa on 14 January 1914. After her marriage, she became known as Baroness Blixen, and she used the title until her ex-husband remarried in 1929.

Karen and Bror planned to raise cattle on their farm, but eventually they became convinced that coffee would be more profitable. The Karen Coffee Company was established by their uncle, Aage Westerholz, who chose the name after his daughter Karen, Blixen’s cousin, rather than to create an association with Karen Blixen.  The land was not well-suited for coffee cultivation, given its high elevation.  The couple hired local workers: most were Kikuyu who lived on the farmlands at the time of the couple’s arrival, but there were also members of other tribal communities (Wakamba, Kavirondo, Swahili and Masai).  Initially, Bror worked the farm, but it soon became evident that he had little interest in it and preferred to leave running the farm to Blixen while he went on safari.  At the farm, Karen Blixen also started to take care of local sick persons, including those suffering from fever, variola, meningitis and typhus.  For the first time, English became the language she used daily; and she greatly enjoyed the liberty that life on the farm and the freedom from European conventions brought with it.  However, Blixen and her husband were quite different in education and temperament, and Bror Blixen was unfaithful to his wife on a major scale.

On 5 April 1918, Bror and Karen were introduced at the Muthaiga Club to the English big game hunter Denys Finch Hatton (1887–1931).  By 1919, the Blixen marriage had run into difficulties, causing Bror to request a divorce in 1920.  He was dismissed as the farm manager by their uncle, Aage Westenholz, chair of the Karen Coffee Company, and Karen took over its management in 1921.  The same year and against her wishes, the couple separated.  In the interim, Karen Blixen and Finch Hatton had developed a close friendship. Finch Hatton had left Africa in 1920, but travelled back and forth between Africa and England and continued to visit Karen, returning in 1922 and investing in a land development company. After her separation from her husband, Karen and Finch Hatton’s friendship turned into a love affair. However, their relationship was unstable, and Karen’s increasing dependence upon Finch Hatton, who was intensely independent, was an issue.  Karen and Bror Blixen were officially divorced in 1925.  Finch Hatton moved into her house, made Blixen’s farmhouse his home base between 1926 and 1931 and began leading safaris for wealthy sportsmen.  Among his clients was Edward, Prince of Wales.  On safari with his clients, he died in the crash of his de Havilland Gipsy Moth biplane in March 1931.  At the same time, the failure of the coffee plantation, as a result of mismanagement, the height of the farm, drought and the falling price of coffee caused by the worldwide economic depression, forced Blixen to abandon her estate. The family corporation sold the land to a residential developer, and Blixen returned to Denmark in August 1931. In the Second World War, she helped Jews escape out of German-occupied Denmark. She remained in Rungstedlund for the rest of her life.

Blixen had begun to dabble in fiction writing and inventing spooky good night stories for her sister Ellen before moving to Africa, and had continued to amuse herself by inventing stories there.  Upon returning to Denmark, aged 46, she took to writing in earnest. Though her first book, Seven Gothic Tales, was completed in 1933, she had difficulty finding a publisher and used her brother’s contacts with Dorothy Canfield to help.  The book was published in the United States in 1934 under the pseudonym Isak Dinesen.  When it was chosen as a Book-of-the-Month Club selection, sales (which until then had not been satisfactory) skyrocketed. The book, enigmatic and more metaphoric than Gothic in nature, won wide recognition in the United States, and publication of the book in the United Kingdom and Denmark followed. The Danish edition was not a translation, but a substantial re-write by Blixen herself, who wanted her first Danish book to be an original text.

Her second book, now the best known of her works, Out of Africa, was published in 1937, first in Denmark and the UK and then in the U.S.. Its success firmly established her reputation.  Garnering another Book-of-the-Month Club choice, Blixen was assured of not only sales for this new work, but also renewed interest in Seven Gothic Tales, as well as critical attention (not all of it positive). She was awarded the Tagea Brandt Rejselegat (a Danish prize for women in the arts or academic life) in 1939.

Five years after the publication of Out of Africa, Blixen published a collection of short stories called Winter’s Tales (1942; Danish: Vinter-eventyr). A departure from her previous Gothic works, the stories reflect the starkness of the times, occupation tinged with courage and pride, resilience, and hope for the future.  She continued to write during the following two decades; with almost all of her tales from the 1940s and 1950s following a traditional style of storytelling, weaving Gothic themes such as incest and murder with myth and bewitchment as a means of exploring identity, morality and philosophy.  Most also take place against the background of the 19th century or earlier periods, which Blixen explained, saying that she wanted to express a spirit that no longer existed in modern times, one of being rather than doing.  A pseudonymously-published novel (The Angelic Avengers), whose authorship she initially denied, was followed in 1957 and 1958, respectively, by the short story collections Last Tales (Danish: Sidste fortællinger) and Anecdotes of Destiny (Danish: Skæbne-Anekdoter).  The most famous tale from Anecdotes is Babette’s Feast, about a chef who spends her entire 10,000-franc lottery prize to prepare a final spectacular gourmet meal. The story evaluates relationships and examines whether the austere but charitable life led by the sisters, in adherence to an ideal, is less true to faith than the passionate gift from the heart of their housekeeper.

After an extended journey to the U.S., Blixen’s final work, Shadows on the Grass (1960) once more returned to the world of Out of Africa.  A memoir consisting of four entries, it would be Blixens fifth and final Book-of-the-Month selection and her final writerly farewell to Africa and its people.  Several more works were published posthumously: Ehrengard (1962), Carnival: Entertainments and Posthumous Tales (1977), Daguerreotypes, and Other Essays (1979) and Letters from Africa, 1914–31 (1981).

Blixen was considered several times for the Nobel Prize in Literature, though wasn’t awarded because judges were reportedly concerned about showing favoritism to Scandinavian writers, according to Danish reports.

Short Story Collections and Other Fiction

Juvenalia, published under the name Osceola

“It is more than their land that you take away from the people, whose Native land you take. It is their past as well, their roots and their identity. If you take away the things that they have been used to see, and will be expecting to see, you may, in a way, as well take their eyes.”

“The plan which I had formed in the beginning, to give in in all minor matters, so as to keep what was of vital importance to me, had turned out to be a failure. I had consented to give away my possessions one by one, as a kind of ransom for my own life, but by the time that I had nothing left, I myself was the lightest thing of all, for fate to get rid of.”

I had a farm in Africa at the foot of the Ngong Hills. The Equator runs across these highlands, a hundred miles to the north, and the farm lay at an altitude of over six thousand feet. In the day-time you felt that you had got high up; near to the sun, but the early mornings and evenings were limpid and restful, and the nights were cold.”

“If I know a song of Africa,-I thought-, of the giraffe and the African new moon lying on her back, of the ploughs in the fields and the sweaty faces of the coffee-pickers, does Africa know a song of me? Would the air over the plain quiver with a color that I have had on, or the children invent a game in which my name was, or the full moon throw a shadow over the gravel of the drive that was like me, or would the eagles of Ngong look out for me?”

“Everything that you saw made for greatness and freedom, and unequalled nobility.”

If they [the white people] had been told that they played no more important part in the lives of the Natives than the Natives played in their own lives, they would have been highly indignant and ill at ease.”

Daguerreotypes and Other Essays

“From my journeys in southern Europe I have gained the impression that in our time the Virgin Mary is the only heavenly creature who is really beloved by millions. But I believe these millions would be uncomprehending and perhaps even offended if I were to tell them that the Virgin Mary had made a significant discovery, solved difficult mathematical problems, or masterfully organized and administered an association of housewives in Nazareth.”

“A man’s center of gravity, the substance of his being, consists in what he has executed and performed in his life; the woman’s, in what she is.”

“Truth, like time, is an idea arising from, and dependent upon, human intercourse.”

Find more quotes by Isak Dinesen on Wikiquote and Goodreads.