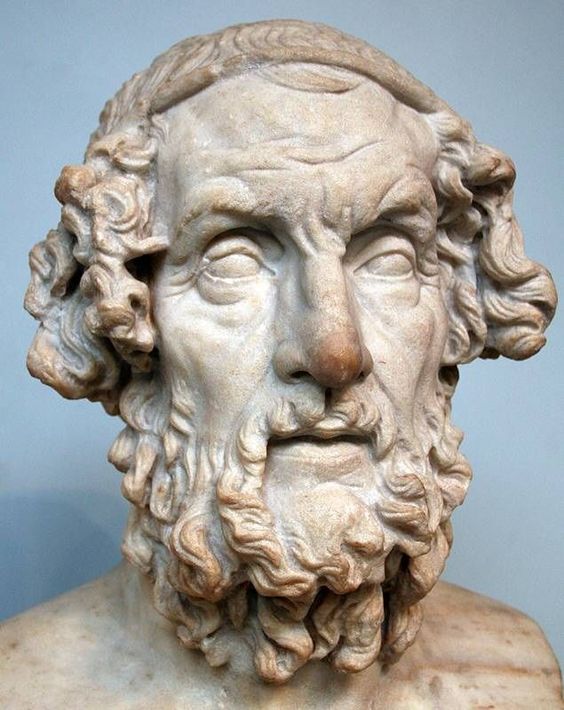 Homer (Ancient Greek: Ὅμηρος – Hómēros) was the presumed author of the Iliad and the Odyssey, two epic poems that are the foundational works of ancient Greek literature. The Iliad is set during the Trojan War, the ten-year siege of the city of Troy by a coalition of Greek kingdoms. It focuses on a quarrel between King Agamemnon and the warrior Achilles lasting a few weeks during the last year of the war. The Odyssey focuses on the ten-year journey home of Odysseus, king of Ithaca, after the fall of Troy. Many accounts of Homer’s life circulated in classical antiquity, the most widespread being that he was a blind bard from Ionia, a region of central coastal Anatolia in present-day Turkey. Modern scholars consider these accounts legendary.

The Homeric Question – concerning by whom, when, where and under what circumstances the Iliad and Odyssey were composed – continues to be debated. Broadly speaking, modern scholarly opinion falls into two groups. One holds that most of the Iliad and (according to some) the Odyssey are the works of a single poet of genius. The other considers the Homeric poems to be the result of a process of working and reworking by many contributors, and that “Homer” is best seen as a label for an entire tradition. It is generally accepted that the poems were composed at some point around the late eighth or early seventh century BC.

The poems are in Homeric Greek, also known as Epic Greek, a literary language which shows a mixture of features of the Ionic and Aeolic dialects from different centuries; the predominant influence is Eastern Ionic. Most researchers believe that the poems were originally transmitted orally. From antiquity until the present day, the influence of Homeric epic on Western civilization has been great, inspiring many of its most famous works of literature, music, art and film. The Homeric epics were the greatest influence on ancient Greek culture and education; to Plato, Homer was the one poet who effectively taught all of Greece.

Read more about Homer on Wikipedia.

Attributed to Homer in Antiquity, but Disputed Today

“Hateful to me as the gates of Hades is that man who hides one thing in his heart and speaks another.”

“Even a fool learns something once it hits him.”
(Or: “Even a fool may be wise after the event.”)

“Still, we will let all this be a thing of the past, though it hurts us, and beat down by constraint the anger that rises inside us.
Now I am making an end of my anger. It does not become me, unrelentingly to rage on.”

“I say no wealth is worth my life.”

“The sort of words a man says is the sort he hears in return.”

“Cattle and fat sheep can all be had for the raiding, tripods for the trading, and tawny headed stallions. But a mans’s lifebreath cannot come back again- no raiders in force, no trading brings it back, once it slips through a man’s clenched teeth.”

“We must set aside old notions and embrace fresh ones; and, as we learn, we must be daily unlearning something which it has cost us no small labour and anxiety to acquire.”

“Of all creatures that breathe and move upon the earth, nothing is bred that is weaker than man.”

“A friend with an understanding heart is worth no less than a brother.”

“The blade itself incites to deeds of violence.”
(Or: “Weapons themselves can tempt a man to fight.”)

“Each man delights in the work that suits him best.”

“Scepticism is as much the result of knowledge, as knowledge is of scepticism.”

“Of the many things hidden from the knowledge of man, nothing is more unintelligible than the human heart.”

“It has been an easy, and a popular expedient of late years, to deny the personal or real existence of men and things whose life and condition were too much for our belief.”

Find more quotes by Homer on Wikiquote and Goodreads.