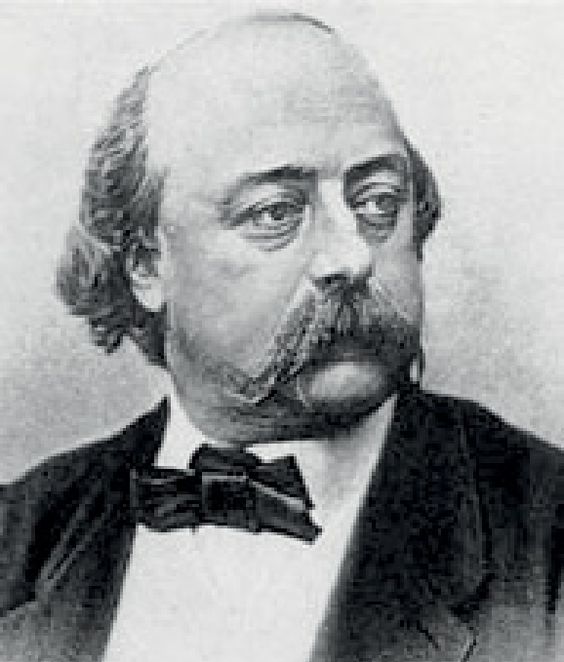 Gustave Flaubert (Rouen, France, December 12, 1821 – Rouen, France, May 8, 1880) was a French writer who is counted among the greatest novelists in Western literature. He is known especially for his first published novel, Madame Bovary (1857), for his Correspondence, and for his scrupulous devotion to his art and style. Flaubert believed in, and pursued, the principle of finding “le mot juste” (“the right word”), which he considered as the key mean to achieve quality in literary art. He worked in sullen solitude – sometimes occupying a week in the completion of one page – never satisfied with what he had composed.

At the time of his death he was widely regarded as the most influential French Realist. Under this aspect Flaubert exercised an extraordinary influence over Guy de Maupassant, Edmond de Goncourt, Alphonse Daudet, and Emile Zola. His lean and precise writing style has also had a large influence on 20th century writers; indeed he has been admired or written about by almost every major literary personality of the 20th century, including not only writers such as Franz Kafka and J. M. Coetzee but also philosophers and sociologists such as Michel Foucault, Roland Barthes, Pierre Bourdieu and Jean Paul Sartre, whose partially psychoanalytic portrait of Flaubert in The Family Idiot was published in 1971. Similarly, Peruvian novelist Mario Vargas Llosa‘s Perpetual Orgy (1975) is solely devoted to Flaubert’s art.

“Human speech is like a cracked kettle on which we tap crude rhythms for bears to dance to, while we long to make music that will melt the stars.”

“He had carefully avoided her out of the natural cowardice that characterizes the stronger sex.”

“I’m absolutely removed from the world at such times … The hours go by without my knowing it. Sitting there I’m wandering in countries I can see every detail of – I’m playing a role in the story I’m reading. I actually feel I’m the characters – I live and breathe with them.”

“It’s hard to communicate anything exactly and that’s why perfect relationships between people are difficult to find.”

“Abstraction can provide stumbling blocks for people of strange intelligence.”

“I tried to discover, in the rumor of forests and waves, words that other men could not hear, and I pricked up my ears to listen to the revelation of their harmony.”

Memoirs of a Madman

“If there is on earth, and among all these things of nothing, a belief worthy of adoration, if there is anything holy, pure and sublime, anything answering that immoderate desire for the infinite and the vague that we call the soul, it is art.

“A good sentence in prose should be like a good line in poetry, unchangeable, as rhythmic, as sonorous.”

Find more quotes by Gustave Flaubert on Wikiquote and Goodreads.