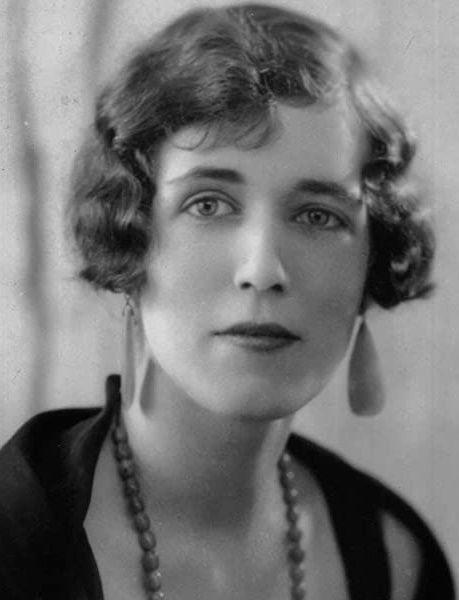 Georgette Heyer (London, UK, August, 16 1902 – London, UK, July 4, 1974) was an English novelist and short story writer, in both the historical romance and detective fiction genres. Her writing career began in 1921, when she turned a story for her younger brother into the novel The Black Moth. In 1925 Heyer married George Ronald Rougier, a mining engineer. The couple spent several years living in Tanganyika Territory and Macedonia before returning to England in 1929. After her novel These Old Shades became popular despite its release during the General Strike, Heyer determined that publicity was not necessary for good sales. For the rest of her life, she refused to grant interviews, telling a friend: “My private life concerns no one but myself and my family.”

Heyer essentially established the historical romance genre and its subgenre Regency romance. Her Regencies were inspired by Jane Austen. To ensure accuracy, Heyer collected reference works and kept detailed notes on all aspects of Regency life. While some critics thought the novels were too detailed, others considered the level of detail to be Heyer’s greatest asset. Her meticulous nature was also evident in her historical novels; Heyer even recreated William the Conqueror’s crossing into England for her novel The Conqueror.

Beginning in 1932, Heyer released one romance novel and one thriller each year. Her husband often provided basic outlines for the plots of her thrillers, leaving Heyer to develop character relationships and dialogue so as to bring the story to life. Although many critics describe Heyer’s detective novels as unoriginal, others such as Nancy Wingate praise them “for their wit and comedy as well as for their well-woven plots”.

Her success was sometimes clouded by problems with tax inspectors and fellow writers suspected of plagiarizing her works, especially romance novelists Barbara Cartland and Kathleen Lindsay. Heyer chose not to file lawsuits against the suspected literary thieves, but tried multiple ways of minimizing her tax liability. Forced to put aside the works she called her “magnum opus” (a trilogy covering the House of Lancaster) to write more commercially successful works, Heyer eventually created a limited liability company to administer the rights to her novels. She was accused several times of providing an overly large salary for herself, and in 1966 she sold the company and the rights to seventeen of her novels to Booker-McConnell. Heyer continued writing until her death in July 1974. At that time, 48 of her novels were still in print; her last book, My Lord John, was published posthumously.

“I think myself I ought to be shot for writing such nonsense …. But it’s unquestionably good escapist literature and I think I should rather like it if I were sitting in an air-raid shelter or recovering from flu.”

“No one could have called Mr. Standen quick-witted, but the possession of three sisters had considerably sharpened his instinct of self-preservation.”

“‘I shall be much obliged to you, cousin, if you will refrain from telling my sisters that she has a face like a horse!’
‘But, Charles, no blame attaches to Miss Wraxton! She cannot help it, and that, I assure you, I have always pointed out to your sisters!’
‘I consider Miss Wraxton’s countenance particularly well-bred!’
‘Yes, indeed, but you have quite misunderstood the matter! I meant a particularly well-bred horse!’
‘You mean, as I am perfectly aware, to belittle Miss Wraxton!’
‘No, no! I am very fond of horses!’ Sophy said earnestly.
Before he could stop himself he found that he was replying to this. ‘Selina, who repeated the remark to me, is not fond of horses, however, and she –’ He broke off, seeing how absurd it was to argue on such a head.
‘I expect she will be, when she has lived in the same house with Miss Wraxton for a month or two,’ said Sophy encouragingly.”

“‘You must not imagine that Papa or I have the least notion of compelling you to marry anyone whom you hold in aversion, for I am sure that such a thing would be quite shocking! And Charles would not do so either, would you, dear Charles?’
‘No, certainly not. But neither would I consent to her marriage with any such frippery fellow as Augustus Fawnhope!’
‘Augustus,’ announced Cecilia, putting up her chin, ‘will be remembered long after you have sunk into oblivion!’
‘By his creditors? I don’t doubt it.'”

“‘Now, that,’ said Sophy, ‘I am very glad to know, because if ever I should desire to please you I shall know just how to set about it. I daresay I shan’t, but one likes to be prepared for any event, however unlikely.'”

“‘I can’t imagine what possessed you to propose to me.’
‘Well that will give you something to puzzle over any time you can’t sleep.'”

“The society of my relatives can only be enjoyed with frequent intervals.”

“‘Oh, Randall, don’t be such a vile beast!’
‘I don’t think much of that,’ he said critically. ‘Amiable snake was much better.'”

Footsteps in the Dark

“Charles’ driving, skilful though it might be, kept his passengers in a constant state of breathlessness.”

“‘You’re more prejudiced against Paul Mansell than I’ve ever known you to be against anyone,’ said Hannasyde.
‘Not prejudiced,’ said the Sergeant firmly. ‘I never let myself get prejudiced. All I say is, that he’s a nasty, slimy, double-faced tick who’d murder his own grandmother if he saw a bit of money to be got out of it.'”

They Found Him Dead

“Miss Allison realised with a slight sinking of the heart that she was to be made the recipient of confidences.”

“‘Whatever should I do if Mama were to arrive while you are gone?’
‘Hide in the hay-loft!’ he recommended. ‘But if she has a particle of commonsense she won’t make the smallest push to recover you!'”

“‘M’sieur, I am as a slave to my wife.’ He kissed the tips of his fingers. ‘I am as the dirt beneath her feet.’ He clasped his hands. ‘I must bestow on her all that she desires, or die!’
‘Pray make use of my sword,’ invited his Grace. ‘It is in the corner behind you.'”

“‘You’ll dine with us, Comte? And you, Anthony?’
‘I trespass on your hospitality!’ Armand protested.
‘Devil a bit, man!’ said Rupert. ‘It’s Avon’s hospitality you trespass on, and our patience.'”

“‘Have you any brothers?’ demanded Mr. Beaumaris.
‘No,’ said Mr. Scunthorpe, blinking at him. ‘Only child.’
‘You relieve my mind. Offer my congratulations to your parents!'”

“‘Have you considered what people would be bound to say?’ Frederick said.
‘No, nor do I propose to burden my head with anything that interests me so little!’ retorted Mr Beaumaris.”

“You will allow that one’s curiosity must be aroused when one learns that a lady is prepared to elope to escape from advances one had not the least intention of making!”

“‘If I were a man I would kill you!’
‘If you were a man we wouldn’t be having this conversation!'”

“What a nonsensical thing it would be in me to allow myself to become alarmed by a trifle such as murder!”

“You must never marry. Don’t, I do earnestly beg of you, allow yourself to be taken in by any lure thrown out to you! You cannot hope to find a lady who will like you better than you like yourself.”