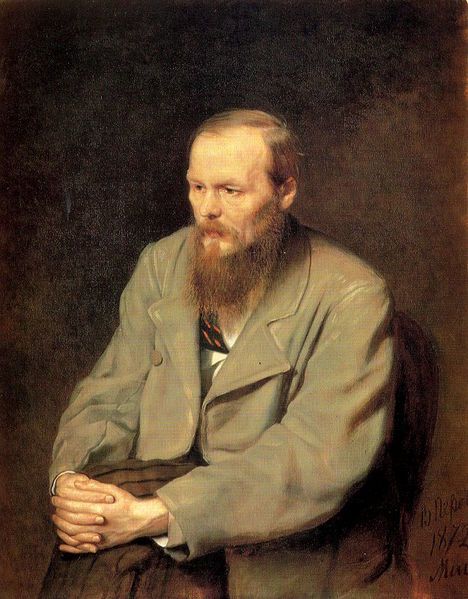 Fyodor Mikhailovich Dostoevsky (Russian: Фёдор Миха́йлович Достое́вский, sometimes also transliterated as ‘Dostoyevsky’; Moscow, Russia, November 11,1821 – Saint Petersburg, Russia, February 9, 1881) was a Russian novelist, short story writer and essayist. Dostoevsky’s literary works explore human psychology in the context of the troubled political, social and spiritual atmosphere of 19th-century Russia. Although he began writing in the mid-1840s, his most memorable works – including Crime and Punishment, The Idiot and The Brothers Karamazov – are from his later years. His output consists of eleven novels, three novellas, seventeen short novels and three essays. Many literary critics rate him as one of the greatest and most prominent psychologists in world literature.

Dostoevsky was born in Moscow. He was introduced to literature at an early age through fairy tales and legends and through books by English, French, German and Russian authors. His mother died suddenly in 1837, when he was 15, and around the same time he left school to enter the Nikolayev Military Engineering Institute. After graduating, he worked as an engineer and briefly enjoyed a liberal lifestyle. He soon began translating books to earn extra money. In the mid-1840s he wrote his first novel, Poor Folk, gaining him entry into St. Petersburg’s literary circles.

In 1849 he was arrested for his involvement with the Petrashevsky Circle, a secret society of liberal utopians that also functioned as a literary discussion group. He and other members were condemned to death, but at the last moment, a note from Tsar Nicholas I was delivered to the scene of the firing squad, commuting the sentence to four years’ hard labour in Siberia. His seizures increased in frequency there, and he was diagnosed with epilepsy. On his release, he was forced to serve as a soldier, but he was discharged on grounds of ill health.

In the following years, Dostoevsky worked as a journalist, publishing and editing several magazines of his own and, later, A Writer’s Diary, a collection of his writings. He began to travel around western Europe and developed a gambling addiction, which led to financial hardship. For a time, he had to beg for money, but he eventually became one of the most widely read and highly regarded Russian writers. His books have been translated into more than 170 languages and have sold around 15 million copies. Dostoevsky influenced a multitude of writers, from Anton Chekhov and James Joyce to Ernest Hemingway and Jean-Paul Sartre.

“Since man cannot live without miracles, he will provide himself with miracles of his own making. He will believe in witchcraft and sorcery, even though he may otherwise be a heretic, an atheist, and a rebel.”

“It is precisely that requirement of shared worship that has been the principal source of suffering for individual man and the human race since the beginning of history. In their efforts to impose universal worship, men have unsheathed their swords and killed one another. They have invented gods and challenged each other: “Discard your gods and worship mine or I will destroy both your gods and you!”

“Learning to love is hard and we pay dearly for it. It takes hard work and a long apprenticeship, for it is not just for a moment that we must learn to love, but forever.”

“Equality lies only in human moral dignity. … Let there be brothers first, then there will be brotherhood, and only then will there be a fair sharing of goods among brothers.”

“There is nothing more alluring to man than freedom of conscience, but neither is there anything more agonizing.”

“Above all, don’t lie to yourself. The man who lies to himself and listens to his own lie comes to a point that he cannot distinguish the truth within him, or around him, and so loses all respect for himself and for others. And having no respect he ceases to love.”

“The world says: “You have needs – satisfy them. You have as much right as the rich and the mighty. Don’t hesitate to satisfy your needs; indeed, expand your needs and demand more.” This is the worldly doctrine of today. And they believe that this is freedom. The result for the rich is isolation and suicide, for the poor, envy and murder.”

“Do you think it is a vain hope that one day man will find joy in noble deeds of light and mercy, rather than in the coarse pleasures he indulges in today – gluttony, fornication, ostentation, boasting, and envious vying with his neighbor? I am certain this is not a vain hope and that the day will come soon.”

“The mystery of human existence lies not in just staying alive, but in finding something to live for.”

“Man, do not pride yourself on your superiority to the animals, for they are without sin, while you, with all your greatness, you defile the earth wherever you appear and leave an ignoble trail behind you – and that is true, alas, for almost every one of us!”

“People speak sometimes about the “bestial” cruelty of man, but that is terribly unjust and offensive to beasts, no animal could ever be so cruel as a man, so artfully, so artistically cruel.”

“Woe to the man who offends a small child!”

“In place of the clear and rigid ancient law, You [oh Lord] made man decide about good and evil for himself, with no other guidance than Your example. But did it never occur to You that man would disregard Your example, even question it, as well as Your truth, when he was subjected to so fearful a burden as freedom of choice?”

“It takes something more than intelligence to act intelligently.”

“I say let the world go to hell, but I should always have my tea.”

The Insulted and Humiliated

“If you want to be respected by others, the great thing is to respect yourself. Only by that, only by self-respect will you compel others to respect you.”

Find more quotes by Fyodor Dostoevsky on Wikiquote and Goodreads.