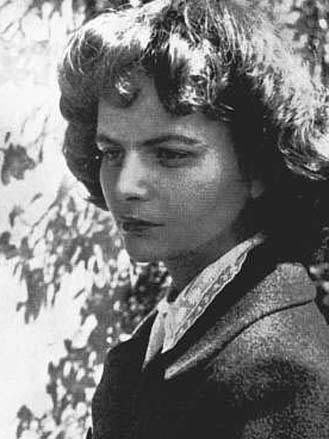 Elsa Morante (Rome, Italy, August 18, 1912 – Rome, Italy November, 25, 1985) was an Italian novelist, perhaps best known for her novel La storia (History), a story about Rome during World War II. She married the novelist and film critic Alberto Moravia in 1941, and through him she met many of the leading Italian thinkers and writers of the day. Freudian psychology, Plato, Pier Paolo Pasolini, and Simone Weil have all been cited as influences on her writing. Southern Italy is the backdrop for much of her work.

Towards the end of World War II, Morante with her husband, fearful because both were half Jewish, fled to the area around the Ciociara region near Rome, a flight that inspired Morante’s La storia and Moravia’s La Ciociara (translated into English as Two Women and later made into a film by Vittorio de Sica starring Sofia Loren).

Following the war, Morante and Moravia met American translator William Weaver, who helped them to find an American audience. Her first novel, 1948’s Menzogna e sortilegio, won the prestigious Viareggio Prize, and was later published in the United States as House of Liars in 1951. However, Morante and others found the English translation quite poorly done, to Morante’s great disappointment.

Morante and Moravia separated in 1961, and Morante continued to write sporadically. La storia (History) appeared in 1974 and, although a bestseller in Italy, provoked a furious and at times negative reaction from literary critics on the left, who disliked its anti-ideological polemic. After her friend Pier Paolo Pasolini wrote a negative review of the book, she broke off their friendship.

Her final novel, 1982’s Aracoeli, has been seen as a summation, albeit by some critics a pessimistic one, of motifs and trends present in all of her writing, such as the importance of children and childhood, and private worlds in which fantasy provides an escape from dreary external realities.

Man, by his very nature, tends to give himself an explanation of the world into which he is born. And this is what distinguishes him from the other species. Every individual, even the least intelligent, the lowest of outcasts, from childhood on gives himself some explanation of the world. And with it he manages to live. And without it, he would sink into madness.”