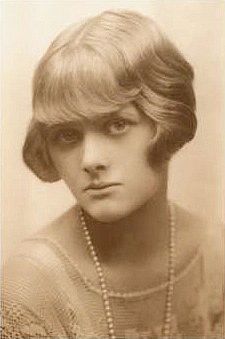 She is frequently classed as a romantic novelist; however, not least because her novels only rarely hava a happy ending, she herself was not happy with this characterization. Her stories have also been described as “moody and resonant” with overtones of the paranormal. Her bestselling works were not at first taken seriously by critics, but have since earned an enduring reputation for narrative craft. Many have been successfully adapted into films, including the novels Rebecca, Frenchman’s Creek, My Cousin Rachel, and Jamaica Inn, and the short stories The Birds and Don’t Look Now / Not After Midnight.

Du Maurier spent much of her life in Cornwall, where most of her works are set. As her fame increased, she became more reclusive.

Her parents were actor/manager Sir Gerald du Maurier and stage actress Muriel Beaumont. Her grandfather was writer and cartoonist George du Maurier; her grandfather, author and Punch cartoonist George du Maurier, who created the character of Svengali in the 1894 novel Trilby.  Moreover, Du Maurier was a cousin of the Llewelyn Davies boys, who served as J.M. Barrie’s inspiration for the characters in the play Peter Pan, or The Boy Who Wouldn’t Grow Up.  Other members of her extended family were prominent members of the era’s literary and arts scene as well; including her maternal great-uncle (William Cormyn Beaumont) and her sisters Angela (also a writer) and Jeanne (a painter).

Du Maurier’s family connections helped her establish her literary career, and she published some of her early work in Beaumont’s Bystander magazine. Her first novel, The Loving Spirit, was published in 1931.

The novel Rebecca (1938) was one of du Maurier’s most successful works. It was an immediate hit, selling nearly 3 million copies between 1938 and 1965. The novel has never gone out of print, and has been adapted for both stage and screen several times. In the U.S., it won the National Book Award for favourite novel of 1938. In the UK, it was listed at number 14 of the “nation’s best-loved novel” on the BBC’s 2003 survey The Big Read.

Other significant works by Du Maurier include The Scapegoat, The House on the Strand, and The King’s General. The last is set in the middle of the first and second English Civil Wars, written from the Royalist perspective of du Maurier’s adopted Cornwall and, like Rebecca, featuring a female narrator.

Her dystopian last novel, Rule Britannia, satirizes the resentment of British people in general, and Cornish people in particular, of the increasing American involvement in UK affairs.  The book’s central character is an aging actress, thought to be based on Gladys Cooper, to whom it is also dedicated.

Many of Du Maurier’s short stories are dark in tone: The Birds, Don’t Look Now, The Apple Tree, and The Blue Lenses, are finely crafted tales of terror that shocked and surprised her audience in equal measure.  The discovery, in 2011, of a collection of du Maurier’s forgotten short stories, written when she was 21, provides some insight into her mature style. One of them, The Doll, concerns a young woman’s obsession with a mechanical male sex doll; idu Maurier’s son Kit Browning is quoted in a February 2011 Independent feature as calling it “quite ahead of its time”.

In later life, she wrote non-fiction, including several biographies such as Gerald, her father’s biography. The Glass-Blowers traces her French Huguenot ancestry and vividly depicts the French Revolution. The du Mauriers traces the family’s move from France to England in the 19th century

“If only there could be an invention that bottled up a memory, like scent. And it never faded, and it never got stale. And then, when one wanted it, the bottle could be uncorked, and it would be like living the moment all over again.”

“Happiness is not a possession to be prized, it is a quality of thought, a state of mind.”

“I wondered why it was that places are so much lovelier when one is alone. How commonplace and stupid it would be if I had a friend now, sitting beside me, someone I had known at school, who would say: “By-the-way, I saw old Hilda the other day. You remember her, the one who was so good at tennis. She’s married, with two children.” And the bluebells beside us unnoticed, and the pigeons overhead unheard. I did not want anyone with me. Not even Maxim. If Maxim had been there I should not be lying as I was now, chewing a piece of grass, my eyes shut. I should have been watching him, watching his eyes, his expression. Wondering if he liked it, if he was bored. Wondering what he was thinking. Now I could relax, none of these things mattered. Maxim was in London. How lovely it was to be alone again.”

“Those dripping crumpets, I can see them now. Tiny crisp wedges of toast, and piping-hot, flaky scones. Sandwiches of unknown nature, mysteriously flavoured and quite delectable, and that very special gingerbread. Angel cake, that melted in the mouth, and his rather stodgier companion, bursting with peel and raisins. There was enough food there to keep a starving family for a week.”

“The order never varies. Two slices of bread-and-butter each, and China tea. What a hide-bound couple we must seem, clinging to custom because we did so in England. Here, on this clean balcony, white and impersonal with centuries of sun, I think of half-past-four at Manderley, and the table drawn before the library fire. The door flung open, punctual to the minute, and the performance, never-varying, of the laying of the tea, the silver tray, the kettle, the snowy cloth.”

The Rendezvous and Other Stories: The Lover

“But luxury has never appealed to me, I like simple things, books, being alone, or with somebody who understands.”

The “Rebecca” Notebook and Other Memories

“Living as we do in an age of noise and bluster, success is now measured accordingly. We must all be seen, and heard, and on the air.”