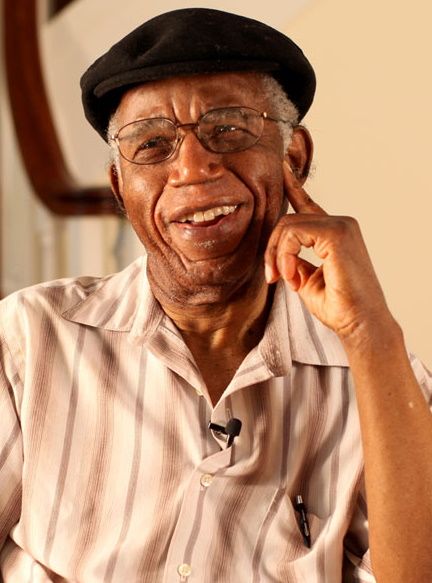 Chinua Achebe (born Albert Chinụalụmọgụ Achebe, Ogidi, Anambra State, Nigeria, November 16, 1930 – Boston, MA, USA, March 21, 2013) was a Nigerian novelist, poet, and critic who is regarded as the most dominant figure in modern African literature. His first novel and magnum opus, Things Fall Apart (1958), occupies a pivotal place in African literature and remains the most widely studied, taught and read African novel. A titled Igbo chief himself, Achebe sought to escape the colonial perspective that predominated African literature, and drew from the traditions of the Igbo people, Christian influences, and the clash of Western and African values to create a uniquely African voice. His style relies heavily on the Igbo oral tradition, and combines straightforward narration with representations of folk stories, proverbs, and oratory. Along with Things Fall Apart, his No Longer at Ease (1960) and Arrow of God (1964) complete the so called “African Trilogy”; later novels include A Man of the People (1966) and Anthills of the Savannah (1987). In addition to his seminal novels, Achebe’s oeuvre includes numerous of short stories, poetry, essay collections and children’s books.

Raised by his parents in the Igbo town of Ogidi in southeastern British Nigeria, Achebe excelled at Government College Umuahia and won a scholarship to study medicine, but changed his studies to English literature at University College (now the University of Ibadan). He became fascinated with world religions and traditional African cultures, and began writing stories as a university student. After graduation, he worked for the Nigerian Broadcasting Service (NBS) and soon moved to the metropolis of Lagos. He gained worldwide attention for his novel Things Fall Apart in the late 1950s which exerted a significant influence on subsequent literature. Achebe wrote his novels in English and defended the use of English, a “language of colonisers,” in African literature. In 1975, his lecture An Image of Africa: Racism in Conrad’s Heart of Darkness featured a criticism of Joseph Conrad as “a thoroughgoing racist;” it was later published in The Massachusetts Review amid controversy.

When the region of Biafra broke away from Nigeria in 1967, Achebe became a supporter of Biafran independence and acted as ambassador for the people of the new nation. The civil war that took place over the territory ravaged the populace, and as starvation and violence took its toll, he appealed to the people of Europe and the Americas for aid. When the Nigerian government retook the region in 1970, he involved himself in political parties but soon became disillusioned by his frustration over the corruption and elitism he witnessed. He lived in the United States for several years in the 1970s, and returned to the U.S. in 1990, after a car crash left him partially disabled. Upon Achebe’s return to the United States in 1990, he began an nineteen-year tenure at Bard College as the Charles P. Stevenson Professor of Languages and Literature. He won the 1994 International Nonino Prize in Italy. From 2009 until his death, he served as David and Marianna Fisher University Professor and Professor of Africana Studies at Brown University.

Achebe’s work has been widely analyzed, and a massive body of scholarly work discussing it has arisen. Among the themes he touches on are politics, history, culture and colonialism as well as masculinity and femininity. To date, his total influence remains unmatched in African literature. His legacy is celebrated annually at the Chinua Achebe Literary Festival, which is held on his birth date (November 16) in Awka, the capital city of Anambra State, where he was born.

Association of Asian and African Writers

University of Massachusetts at Amherst (USA)

Essays and Other Nonfiction

“Until the lions have their own historians, the history of the hunt will always glorify the hunter.”

“Among the Igbo the art of conversation is regarded very highly, and proverbs are the palm-oil with which words are eaten.”

No Longer at Ease

“The impatient idealist says: ‘Give me a place to stand and I shall move the earth.’ But such a place does not exist. We all have to stand on the earth itself and go with her at her pace.”

“Women and music should not be dated.”

“A fox must be chased away first; after that the hen might be warned against wandering into the bush.”

“My father used to say that it is the fear of causing offense that makes men swallow poison.”

“If my enemy speaks the truth I will not say because it is spoken by my enemy I will not listen.”

Anthills of the Savannah

“While we do our good works let us not forget that the real solution lies in a world in which charity will have become unnecessary.”

“Storytellers are a threat. They threaten all champions of control, they frighten usurpers of the right-to-freedom of the human spirit – in state, in church or mosque, in party congress, in the university or wherever.”

“Writers don’t give prescriptions. They give headaches!”

“Don’t disparage the day that still has an hour of light in its hand.”

A Man of the People

“Every man and every woman in Urua and every child and every adult would throw his or her paper for him on the day of election – as they had done in the past. If there was any other name called in the matter the elders and councillors of Urua had not heard it. He said this over and over again with minor changes in detail, like the omission of ‘every child’ which I noticed particularly because it had struck me as odd in the first place. And I thought: if the whole people had taken the decision why were they now being told of it?”

The Education of a British-Protected Child: Essays

“We cannot trample upon the humanity of others without devaluing our own. The Igbo, always practical, put it concretely in their proverb Onye ji onye n’ani ji onwe ya: ‘He who will hold another down in the mud must stay in the mud to keep him down.'”

“I do not see that it is necessary for any people to prove to another that they build cathedrals or pyramids before they can be entitled to peace and safety.”

“Letters are, of course, quite special in my view, for when a reader has been sufficiently moved (or even perturbed) by a book to sit down and compose a letter to the author, something very powerful has happened. Things Fall Apart has brought me a large body of such correspondence from people of different ages and backgrounds and from all the continents.”

“Privilege, you see, is one of the great adversaries of the imagination; it spreads a thick layer of adipose tissue over our sensitivity.”

There Was a Country: A Personal History of Biafra

“Some people flinch when you talk about art in the context of the needs of society thinking you are introducing something far too common for a discussion of art. Why should art have a purpose and a use? Art shouldn’t be concerned with purpose and reason and need, they say. These are improper. But from the very beginning, it seems to me, stories have indeed been meant to be enjoyed, to appeal to that part of us which enjoys good form and good shape and good sound.”

“Most writers who are beginners, if they are honest with themselves, will admit that they are praying for a readership as they begin to write. But it should be the quality of the craft not the audience, that should be the greatest motivating factor. For me, at least, I can declare that when I wrote Things Fall Apart I couldn’t have told anyone the day before it was accepted for publication that anybody was going to read it. There was no guarantee; nobody ever said to me, Go and write this, we will publish it and we will read it; it was just there. But my brother-in-law who was not a particularly voracious reader, told me that he read the novel through the night and it gave him a terrible headache the next morning. And I took that as an encouraging endorsement!
The triumph of the written word is often attained when the writer achieves union and trust with the reader, who then becomes ready to be drawn deep into unfamiliar territory, walking in borrowed literary shoes so to speak, toward a deeper understanding of self or society, or of foreign peoples, cultures and situations.”

“Nations enshrine mediocrity as their modus operandi, and create the fertile ground for the rise of tyrants and other base elements of the society, by silently assenting to the dismantling of systems of excellence because they do not immediately benefit one specific ethnic, racial, political, or special-interest group. That, in my humble opinion, is precisely where Nigeria finds itself today!”

“Our humanity is contingent on the humanity of our fellows. No person or group can be human alone. We rise above the animal together, or not at all. If we learned that lesson even this late in the day, we would have taken a truly millennial step forward.”

Find more quotes by Chinua Achebe on Wikiquote and Goodreads.