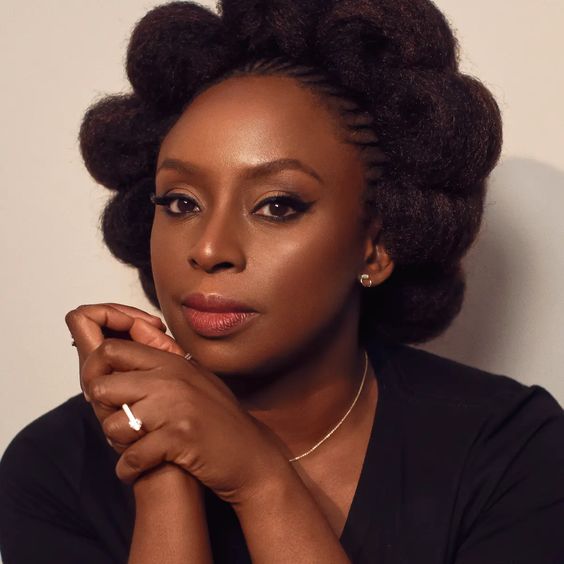 Chimamanda Ngozi Adichie (born Enugu, Nigeria, September 15, 1977) is a Nigerian writer whose works range from novels to short stories to nonfiction. A 2011 article in The Times Literary Supplement has called her “the most prominent” of a “procession of critically acclaimed young anglophone authors [which] is succeeding in attracting a new generation of readers to African literature”, particularly in her second home, the United States.

Adichie’s works include the both critically and popularly widely acclaimed novels Purple Hibiscus (2003), Half of a Yellow Sun (2006), and Americanah (2013), the short story collection The Thing Around Your Neck (2009), and the book-length essays We Should All Be Feminists (2014) and Dear Ijeawele, or A Feminist Manifesto in Fifteen Suggestions (2017), and the stand-alone short story Zikora (2020). In 2008, she was awarded a MacArthur Genius Grant.  In 2010 she was listed among the authors of The New Yorker‘s “20 Under 40” Fiction Issue. Adichie’s story Ceiling was included in the 2011 edition of The Best American Short Stories. In April 2014, Adichie was named as one of 39 writers aged under 40 in the Hay Festival and Rainbow Book Club project Africa39, celebrating Port Harcourt UNESCO World Book Capital 2014. In 2015, she was co-curator of the PEN World Voices Festival. In April 2017, it was announced that Adichie had been elected into the 237th class of the American Academy of Arts and Sciences, one of the highest honours for intellectuals in the United States, as one of 228 new members to be inducted on 7 October 2017.

Adichie’s original inspiration came from Chinua Achebe, after reading his 1958 novel Things Fall Apart, at the age of 10; Adichie saw her own life represented in the pages of Achebe’s book. After she had published poetry and short fiction, her first novel, Purple Hibiscus (2003), received wide critical acclaim; it was shortlisted for the Orange Prize for Fiction (2004) and was awarded the Commonwealth Writers’ Prize for Best First Book (2005).

Her second novel, Half of a Yellow Sun (2006), named for the flag of the short-lived nation of Biafra, is set before and during the Nigerian Civil War and was, in part inspired by her own family’s experience. Half of a Yellow Sun received the 2007 Orange Prize for Fiction and the Anisfield-Wolf Book Award; and it was adapted into a 2014 film of the same title, starring BAFTA award-winners and Academy Award nominees Chiwetel Ejiofor and Thandiwe Newton. In November 2020, the novel was voted by the public to be the best book to have won the Women’s Prize for Fiction in its 25-year history.

Adichie’s third book, The Thing Around Your Neck (2009), is a collection of 12 stories that explore the relationships between men and women, parents and children, Africa and the United States. Her third novel Americanah (2013), an exploration of a young Nigerian encountering race in America, was selected by The New York Times as one of the 10 best books of 2013 and, in 2017, as the winner for the “One Book, One New York” program, part of a community reading initiative encouraging all city residents to read the same book.

Her next book, Dear Ijeawele, or A Feminist Manifesto in Fifteen Suggestions, published in March 2017, had its origins in a letter Adichie wrote to a friend who had asked for advice about how to raise her daughter as a feminist. – In an interview in 2014, the year she had  published We Should All Be Feminists, Adichie said on feminism and writing: “I think of myself as a storyteller but I would not mind at all if someone were to think of me as a feminist writer … I’m very feminist in the way I look at the world, and that world view must somehow be part of my work.”

Half of a Yellow Sun

“Ugwu fumbled, awkwardly, for something to say. ‘Are you still writing your book, sah?’
‘No.’
‘”The World Was Silent When We Died”. It is a good title.’
‘Yes, it is. It came from something Colonel Madu said once.’
Richard paused. ‘The war isn’t my story to tell, really.’
Ugwu nodded. He had never thought that it was.”

“This was love: a string of coincidences that gathered significance and became miracles.”

“Richard exhaled. It was like somebody sprinkling pepper on his wound: Thousands of Biafrans were dead, and this man wanted to know if there was anything new about one dead white man. Richard would write about this, the rule of Western journalism: One hundred dead black people equal to one dead white person.”

“Olanna felt the slow sadness of missing a person who was still there.”

“‘When I lost my whole family, every single one, it was as if I had been born all over again,’ Inatimi told Richard in his quiet way. ‘I was a new person because I no longer had family to remind me of what I had been.'”

“How much did one know of the true feelings of those who did not have a voice?”

“Ogbenyealu is a common name for girls and you know what it means? ‘Not to Be Married to a Poor Man.’ To stamp that on a child at birth is capitalism at its best.”

“If you don’t understand, ask questions. If you’re uncomfortable about asking questions, say you are uncomfortable about asking questions and then ask anyway. It’s easy to tell when a question is coming from a good place. Then listen some more. Sometimes people just want to feel heard. Here’s to possibilities of friendship and connection and understanding.”

“Why did people ask ‘What is it about?’ as if a novel had to be about only one thing.”

“Race doesn’t really exist for you because it has never been a barrier. Black folks don’t have that choice.”

“There are people, she once wrote, who think that we cannot rule ourselves because the few times we tried, we failed, as if all the others who rule themselves today got it right the first time. It is like telling a crawling baby who tries to walk, and then falls back on his buttocks, to stay there. As if the adults walking past him did not all crawl, once.”

“People have crushes on priests all the time, you know. It’s exciting to have to deal with God as a rival.”

“It was what Aunty Ifeoma did to my cousins, I realized then, setting higher and higher jumps for them in the way she talked to them, in what she expected of them. She did it all the time believing they would scale the rod. And they did. It was different for Jaja and me. We did not scale the rod because we believed we could, we scaled it because we were terrified that we couldn’t.”

We Should All Be Feminists

“Some people ask: ‘Why the word feminist? Why not just say you are a believer in human rights, or something like that?’ Because that would be dishonest. Feminism is, of course, part of human rights in general – but to choose to use the vague expression human rights is to deny the specific and particular problem of gender. It would be a way of pretending that it was not women who have, for centuries, been excluded. It would be a way of denying that the problem of gender targets women.”

“Culture does not make people. People make culture. If it is true that the full humanity of women is not our culture, then we can and must make it our culture.”

“A woman at a certain age who is unmarried, our society teaches her to see it as a deep personal failure. And a man, after a certain age isn’t married, we just think he hasn’t come around to making his pick.”

“Masculinity is a hard, small cage, and we put boys inside this cage.”

Dear Ijeawele, or A Feminist Manifesto in Fifteen Suggestions

“I taught an introductory creative writing class at Princeton last year and, in addition to the classic ‘show don’t tell’, I often told my students that their fiction needed to have ’emotional truth’ […]: a quality different from honesty and more resilient than fact, a quality that existed not in the kind of fiction that explains but in the kind of fiction that shows. All the novels I love, the ones I remember, the ones I re-read, have this empathetic human quality. And because I write the kind of fiction I like to read, when I started Half of a Yellow Sun […], I hoped that emotional truth would be its major recognizable trait. […]
Successful fiction does not need to be validated by ‘real life’; I cringe whenever a writer is asked how much of a novel is ‘real’. Yet, […] to write realistic fiction about war, especially one central to the history of one’s own country, is to be constantly aware of a responsibility to something larger than art. While writing Half of a Yellow Sun, I enjoyed playing with minor things [such as inventing a train station in a town that has none]. Yet I did not play with the central events of that time. I could not let a character be changed by anything that had not actually happened. If fiction is indeed the soul of history, then I was equally committed to the fiction and the history, equally keen to be true to the spirit of the time as well as to artistic vision of it.
The writing itself was a bruising experience. […] But there were also moments of extravagant joy when I recognized, in a character or moment or scene, that quality of emotional truth.”