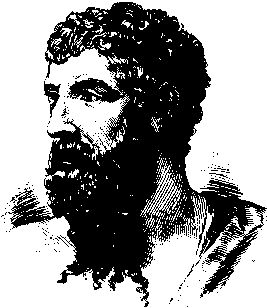 Aristophanes (Ancient Greek: Ἀριστοφάνης; ca. 446 – c. 386 BC), was a comic playwright or comedy-writer of ancient Athens and a poet of Old Attic Comedy.  Eleven of his forty plays survive virtually complete. These provide the most valuable examples of a genre of comic drama known as Old Comedy and are used to define it, along with fragments from dozens of lost plays by Aristophanes and his contemporaries.

Also known as “The Father of Comedy” and “the Prince of Ancient Comedy”, Aristophanes has been said to recreate the life of ancient Athens more convincingly than any other author. His powers of ridicule were feared and acknowledged by influential contemporaries; Plato, in his  Apology, singled out Aristophanes’ play The Clouds as slander that contributed to the trial and subsequent condemning to death of Socrates, although other satirical playwrights had also caricatured the philosopher.

Aristophanes’ second play, The Babylonians (now lost), was denounced by prominent Athenian Peloponnesian War general Cleon as a slander against the Athenian polis. It is possible that the case was argued in court, but details of the trial are not recorded and Aristophanes caricatured Cleon mercilessly in his subsequent plays, especially The Knights, the first of many plays that he directed himself. “In my opinion,” he says through that play’s Chorus, “the author-director of comedies has the hardest job of all.”

Read more about Aristophanes on Wikipedia.

“To win the people, always cook them some savoury that pleases them.”

“[Y]ou possess all the attributes of a demagogue; a screeching, horrible voice, a perverse, crossgrained nature and the language of the market-place. In you all is united which is needful for governing.”

“You [demagogues] are like the fishers for eels; in still waters they catch nothing, but if they thoroughly stir up the slime, their fishing is good; in the same way it’s only in troublous times that you line your pockets.”

“Politics, these days, is no occupation for an educated man, a man of character. Ignorance and total lousiness are better.”

“Comedy too can sometimes discern what is right. I shall not please, but I shall say what is true.”

“Look at the orators in our republics; as long as they are poor, both state and people can only praise their uprightness; but once they are fattened on the public funds, they conceive a hatred for justice, plan intrigues against the people and attack the democracy.”

“One’s country is wherever one does well.”

“[Y]ou [man] are fool enough, it seems, to dare to war with [woman=] me, when for your faithful ally you might win me easily.”

“That man is sharp who can say what he wants in a minimum of words.”

“A prudent person after all can pick something
Even from an enemy.”

“Chorus [of Birds]: Man is a truly cunning creature.”

“Unjust Discourse: To invoke solely the weaker arguments and yet triumph is a talent worth more than a hundred thousand drachmae.”

Find more quotes by Aristophanes on Wikiquote and Goodreads.