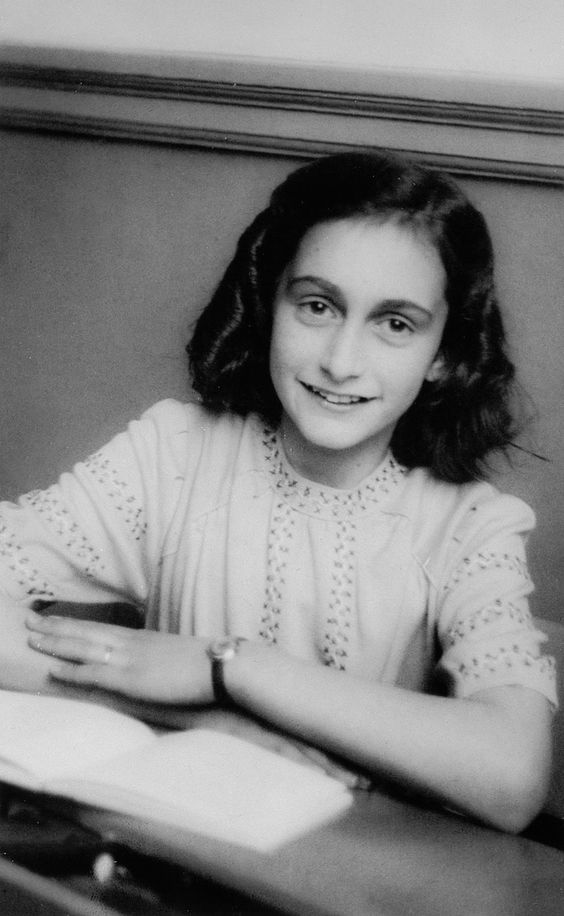 Annelies Marie “Anne” Frank (Frankfurt, Germany, June 12, 1929 – Bergen-Belsen concentration camp, Germany, February or March, 1945) was a German-Dutch diarist of Jewish heritage. One of the most discussed Jewish victims of the Holocaust, she gained fame posthumously with the 1947 publication of The Diary of a Young Girl (originally Het Achterhuis in Dutch; English: The Secret Annex), in which she documents her life in hiding from 1942 to 1944, during the German occupation of the Netherlands in World War II. It is one of the world’s best-known books and has been the basis for several plays and films.

Born in Frankfurt, Germany, Anne lived most of her life in or near Amsterdam, Netherlands, having moved there with her family at the age of four and a half when the Nazis gained control over Germany. She lost her citizenship in 1941 and thus became stateless. By May 1940, the Franks were trapped in Amsterdam by the German occupation of the Netherlands. As persecutions of the Jewish population increased in July 1942, the Franks went into hiding in some concealed rooms behind a bookcase in the building where Anne’s father, Otto Frank, worked. From then until the family’s arrest by the Gestapo in August 1944, Anne kept a diary she had received as a birthday present, and wrote in it regularly. Following their arrest, the Franks were transported to concentration camps. In October or November 1944, Anne and her sister, Margot, were transferred from Auschwitz to Bergen-Belsen, where they died (probably of typhus) a few months later. They were originally estimated by the Red Cross to have died in March, with Dutch authorities setting 31 March as their official date of death, but research by the Anne Frank House in 2015 suggests it is more likely that they died in February.

Anne’s father Otto, the only survivor of the Frank family, returned to Amsterdam after the war to find that her diary had been saved by his secretary, Miep Gies, and his efforts led to its publication in 1947. It was translated from its original Dutch version and first published in English in 1952 as The Diary of a Young Girl, and has since been translated into over 70 languages.

The Diary of a Young Girl

“It’s really a wonder that I haven’t dropped all my ideals, because they seem so absurd and impossible to carry out. Yet I keep them, because in spite of everything, I still believe that people are really good at heart.”

“I can shake off everything as I write; my sorrows disappear, my courage is reborn.”

“I don’t think of all the misery, but of the beauty that still remains.”

“Parents can only give good advice or put them on the right paths, but the final forming of a person’s character lies in their own hands.”

“The best remedy for those who are afraid, lonely or unhappy is to go outside, somewhere where they can be quite alone with the heavens, nature and God. Because only then does one feel that all is as it should be and that God wishes to see people happy, amidst the simple beauty of nature. As longs as this exists, and it certainly always will, I know that then there will always be comfort for every sorrow, whatever the circumstances may be. And I firmly believe that nature brings solace in all troubles.”

“Look at how a single candle can both defy and define the darkness.”

“People can tell you to keep your mouth shut, but that doesn’t stop you from having your own opinion.”

“Where there’s hope, there’s life. It fills us with fresh courage and makes us strong again.”

“Women should be respected as well! Generally speaking, men are held in great esteem in all parts of the world, so why shouldn’t women have their share? Soldiers and war heroes are honored and commemorated, explorers are granted immortal fame, martyrs are revered, but how many people look upon women too as soldiers? In childbirth alone, women commonly suffer more pain, illness and misery than any war hero ever does. And what’s her reward for enduring all that pain? She gets pushed aside when she’s disfigured by birth, her children soon leave, her beauty is gone. Women, who struggle and suffer pain to ensure the continuation of the human race, make much tougher and more courageous soldiers than all those big-mouthed freedom-fighting heroes put together!”

“Although I’m only fourteen, I know quite well what I want, I know who is right and who is wrong. I have my opinions, my own ideas and principles, and although it may sound pretty mad from an adolescent, I feel more of a person than a child, I feel quite independent of anyone.”

“In spite of everything I still believe that people are really good at heart. I simply can’t build up my hopes on a foundation consisting of confusion, misery, and death. I see the world gradually being turned into a wilderness, I hear the ever approaching thunder, which will destroy us too, I can feel the sufferings of millions and yet, if I look up into the heavens, I think that it will all come right, that this cruelty too will end, and that peace and tranquility will return again.”

“As long as this exists, this sunshine and this cloudless sky, and as long as I can enjoy it, how can I be sad?”

“There’s only one rule you need to remember: laugh at everything and forget everybody else! It sounds egotistical, but it’s actually the only cure for those suffering from self-pity.”

“I know what I want, I have a goal, an opinion, I have a religion and love. Let me be myself and then I am satisfied. I know that I’m a woman, a woman with inward strength and plenty of courage.”

“Everyone has inside of him a piece of good news. The good news is that you don’t know how great you can be! How much you can love! What you can accomplish! And what your potential is!”

“I can’t imagine how anyone can say: “I’m weak,” and then remain so. After all, if you know it, why not fight against it, why not try to train your character? The answer was: “Because it’s so much easier not to!”

“This week I’ve been reading a lot and doing little work. That’s the way things ought to be. That’s surely the road to success.”

“I think it’s odd that grown-ups quarrel so easily and so often and about such petty matters. Up to now I always thought bickering was just something children did and that they outgrew it.”

“Don’t be too assuming, it doesn’t get you anywhere.”

“What I condemn are our system of values and the men who don’t acknowledge how great, difficult, but ultimately beautiful women’s share in society is.”

“Unless you write yourself, you can’t know how wonderful it is; I always used to bemoan the fact that I couldn’t draw, but now I’m overjoyed that at least I can write. And if I don’t have the talent to write books or newspaper articles, I can always write for myself. But I want to achieve more than that.”

“If I’m engrossed in a book, I have to rearrange my thoughts before I can mingle with other people, because otherwise they might think I was strange.”

“People can so easily be tempted by slackness … and by money.”

“What’s the point of the war? Why, oh why can’t people live together peacefully? Why all this destruction?”

“What one Christian does is his own responsibility, what one Jew does is thrown back at all Jews.”

Find more quotes by Anne Frank on Wikiquote and Goodreads.