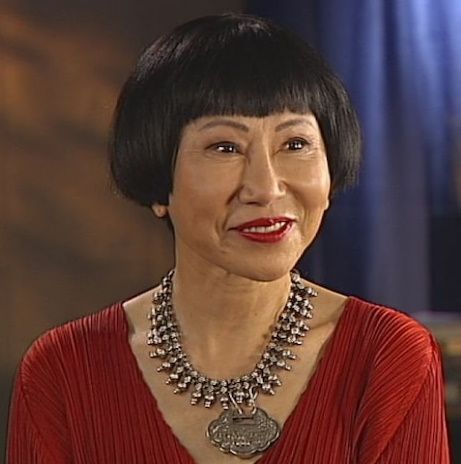 Amy Tan (born Oakland, CA, USA, February 19, 1952) is an American writer whose works explore mother-daughter relationships. Her most well-known work is The Joy Luck Club, which has been translated into 35 languages and was inspired by the experience of Tans’s immigrant mother, Daisy (née Li), who was forced to leave her three daughters from a previous marriage behind in Shanghai. In 1993, the book was adapted into a commercially successful film.

Tan has written several other bestselling novels, including The Kitchen God’s Wife, The Hundred Secret Senses, The Bonesetter’s Daughter and Saving Fish from Drowning, which explores the tribulations experienced by a group of people who disappear while on an expedition in the jungles of Burma. She also wrote a collection of non-fiction essays entitled The Opposite of Fate. In addition to these, Tan has written two children’s books: The Moon Lady (1992) and Sagwa, the Chinese Siamese Cat (1994), which was turned into an animated series which aired on PBS. She also appeared on PBS in a short spot encouraging children to write.

Amy Tan and Stephen King were among several writers who, in 1992, were persuaded by a publicist to form a literary rock band that would eventually come to be named The Rock Bottom Remainders, and appear at the 1992 American Booksellers Association convention in Anaheim, CA. The participants had so much fun with the project that they ended up taking their act on the road; a tour that they later documented in a joint publication entitled Mid-Life Confidential: The Rock Bottom Remainders Tour America With Three Cords and an Attitude. The band stayed together for 20 years and gave its last concert on June 23, 2012, again at the annual conference of the American Library Association in Anaheim, CA (with a final TV studio performance following on the August 6, 2012 episode of The Late Late Show with Craig Ferguson).

“Chance is the first step you take, luck is what comes afterward.”

“I take a few quick sips. “This is really good.” And I mean it. I have never tasted tea like this. It is smooth, pungent, and instantly addicting.
“This is from Grand Auntie,” my mother explains. “She told me ‘If I buy the cheap tea, then I am saying that my whole life has not been worth something better.’ A few years ago she bought it for herself. One hundred dollars a pound.”
“You’re kidding.” I take another sip. It tastes even better.”

“Everyone must dream. We dream to give ourselves hope. To stop dreaming – well, that’s like saying you can never change your fate. Isn’t that true?”

Find more quotes by Amy Tan on Wikiquote and Goodreads.