Kill Your Darlings: Rules of Play 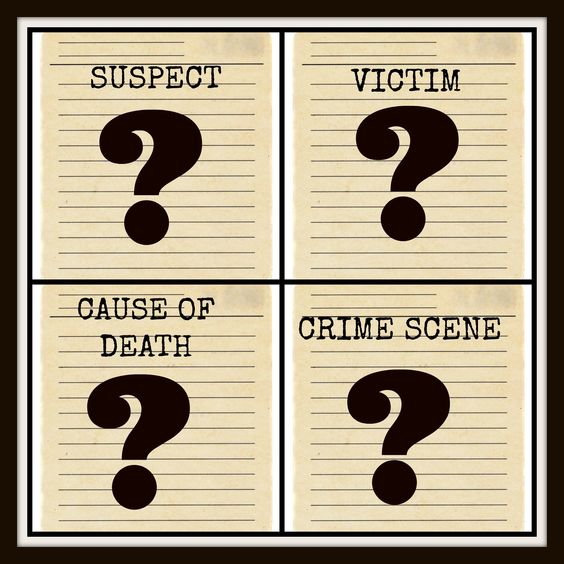 One of our most popular authors has gone off the rails, and is killing beloved characters!*

We need a group of dedicated investigators to solve the crime, and stop the killer before he (or she) can kill again!

*The murderer is only killing characters that belong to other authors. The murderer does not have any objection to using a weapon/crime scene that is attributable to the author. Each victim can only die once, but crime scenes/weapons can be reused.

I have introduced the suspects and the crime scene cards already. Tomorrow I will reveal the weapons that the killer has to choose from, and then on Wednesday, I will show you the identity of the possible victims. There are a total of 40 cards, 10 cards per element, that will be combined to create the solution to the crime.

I think it is helpful to imagine the game play as a card game, where you acquire a card by reading a book that fits the card criteria and then you play the card in an effort to identify one of the essential elements. Once you tie a book to a card, the book has been used. You can’t re-use the book to acquire a second/third/etc card, even if the book would fit the card criteria. Choose your cards wisely – the card criteria are purposely broad.

Like many card games, you get points for play!

Players are responsible for calculating their own points – however, I will keep track of the players who make a successful identification in the bingo group. I want to encourage people to play cards, rather than hang back and let the other players do the work, which is why players get points for an unsuccessful play.

Each opportunity to play a card will be called a round. We will have rounds on Tuesday, Thursday and Saturday. Play will occur in the bingo group, on the thread that has been set up for the purpose of tracking rounds.

There is only one murderer. However, until the murderer is identified, he/she may continue the spree, creating new victims/weapons/crime scenes. Identification of the murderer freezes game play.

I will announce the addition of new elements both in the bingo group and on my blog. I may also offer clues and/or hints, if the fancy strikes me.

I will open a thread in the bingo group for readers to form teams/partnerships. If you are in a team/partnership, you and the other members share points/collected elements. However, with respect to points, your points totals will be divided by the number of members of the group, as a handicapping mechanism to even out play.

There are three ways to win the game:

Speed winner: The speed winner is the person or team who completes the game first, by solving the primary murder. This is independent of points.

Points winner: The points winner is the person or team that ends the game with the most points. Game play ends when all open investigative questions are resolved.

One thought on “Kill Your Darlings: Rules of Play”