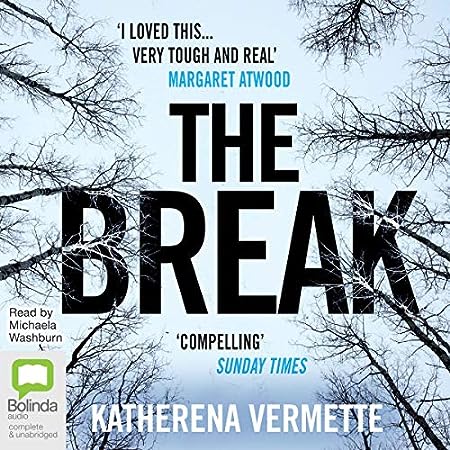 Big sigh.  Oh, this book had so much going for it.

The Break is set in a uniquely Canadian — well, OK, Canadian and Canada / U.S. border region — community; that of the Métis, descendants of the union of European (mostly French) settlers and their Native American partners; one of three groups of Indigenous peoples referenced in the Canadian constitution, and recognized as a distinct Indigenous people under the Constitution Act of 1982.  (“Métis” means “mixed”, or “mixed race”, or “of mixed descent.”)  While the Métis were crucial, inter alia, to the foundation of the Province of Manitoba, the only Canadian Province where they currently have a designated territory of their own is Alberta.  This story, however, is set in Manitoba; more specifically in the Winnipeg North End, the neighborhood in which Vermette herself grew up: a neighborhood whose population consists of a comparatively high percentage of of Indigenous people (approximately 25%, in about equal parts First Nations and Métis) and is characterized by its — even for Winnipeg — high rate of reported crimes, as well as widespread anti-Indigenous prejudice.

Moreover, the novel shines a glaring light on the trauma brought about by sexual crimes, particularly by those committed against very young women and adolescent girls: in the victim, but also their families; in their female relatives even more so if they themselves have experienced or witnessed violence and abuse, too — as well as in those of the victim’s friends who witnessed the crime, and in a probably largely unavowed way, even in the perpetrators or those close to them (especially if they are women, too).  Using the novel’s setting, Vermette highlights how this trauma is exacerbated if it is added on top of the feeling of insecurity and repression already caused in Indigenous women by growing up and living in an environment noticeable for its disregard of Indigenous concerns of all natures, but particularly so, in connection with the prosecution of sexual harrassment and other crimes against the person.

Yet, Vermette doesn’t exclusively give us a female perspective: I also very much liked the way in which she shows, from the character’s own point of view, how a young male Métis policeman gets completely caught up between all the lines imaginable in this setting: a man trying to talk to traumatized women; a policeman trying to investigate a crime where both the victim and both key witnesses are too traumatized to be able to speak; a young and inexperienced cop eager to do well and bring some level of justice to the victim and her family, but saddled with a much older partner who couldn’t give a damn and who only seems to be waiting for another mistake by the rookie to put him down once again; and finally, a young Métis fighting for the respect of his older white partner.

And there is no question that Vermette can write: At the beginning of the novel, it took her all of three minutes to get me infuriated about the way in which the Métis witness to a crime, a young mother completely and understandably out of her depth, is being treated (or rather, dismissed as inconsequential and unworthy of attention) by the police and by her own husband.  And there are plenty of other gut-wrenching passages in the book — particularly those where Vermette uses restraint and doesn’t try to throw everything but the kitchen sink in her range of vocabulary at whatever she happens to be describing.

This is, as indicated in the final sentence of the above paragraph, unfortunately a classic case of “too many notes” — the charge unjustly leveled at Mozart’s music in Peter Shaffer’s (and Miloš Forman’s) Amadeus, but which otherwise so perfectly characterizes a hugely overwritten composition.

For one thing, the narrative would immensely have benefited from a leaner structure; by which I don’t necessarily mean the constant change of perspective between various characters as such, but the great number of characters involved and the fact that the novel’s focus keeps wandering from the central story; namely, that of the sexual assault witnessed (from afar) and reported to the police at the very beginning.  Instead of using that story as a crystallized focus, the novel keeps diverting the reader’s attention to the life, abuse, and relationship experience of a plethora of other women, whose connection with the central events at first is not recognizable at all, and who are only gradually revealed as essentially the victim’s entire extended family (mother, aunties, grandmother, great-grandmother, younameit), as well as (while we’re at it), her best friend (also a witness to the crime), that friend’s mother, her own connection to the victim’s family … and, oh yes, yet another female character, whom we gradually come to suspect as being somehow aligned with the perpetrator’s side — and as if all of this weren’t more than enough already, a female character speaking to us from the Great Beyond, Lovely Bones style (and unlike everybody else, in a first person narrative voice).  Which in its ensemble (beyond the grave, first person, present tense) is a narrative perspective I personally detest, so in that regard we’re in “it’s not you, book, it’s me” territory; but in that regard only.  There genuinely are way too many characters and life stories to keep track of here; in fact, we learn more about just about everyone BUT the victim, and that, to me, is a huge fail in and of itself.  I can see and honor the attempt to show that the emotional trauma caused by the attack isn’t limited to the victim alone but also affects those nearest and dearest to her — as well as witnesses –, particularly if this isn’t the first time their lives are touched by an act of violence, but less would have been considerably more here, and the main focus should NEVER have wavered from the victim; or perhaps, the contrasting perspectives of the victim on the one hand and the young woman representing the perpetrator’s side on the other hand (with the young male cop caught between the lines).

More generally speaking, this book reads exactly like what it is: the product of a literary fiction class.  There is an enormous emphasis on writing “beautifully” and “artistically” — only a minority of the wordy constructs that pass for descriptive sentences here read like something that Vermette (or anybody else) would actually say in describing the same situation in conversation or, for that matter, in any other setting more obviously calling for a rendition in the speaker’s natural, everyday voice; whereas almost her only means of characterizing speechlessness in dialogue this exchange, repeated ad nauseam:

Which got on my nerves in double quick time.  Which, in turn, is a pity, because there are passages where Vermette shows that she is aware that you can do it differently, and generally more effectively, by showing how outside noises and smells intrude into an uncomfortable silence, of someone’s visual attention is distracted, or people start talking about something completely irrelevant.

Another huge “tell” (at least in a new writer) is the use of a present tense narrative: yes, it can add immediacy, but you first have to know how to create immediacy as such, and if it doesn’t grab the reader’s gut when written in the narrative past tense, there’s no logical reason to assume it will do so in the present tense, because essentially it’s the substance of what you write that is supposed to grab the reader, not the tense it’s written in.  Here, too, Vermette succeeds in some scenes (like the above-mentioned opening of the novel, where I didn’t even notice the tense), but as a general matter the use of the present tense just comes across as pretentious here.

And, final pet peeve of mine: the use of swearing to denote mental toughness; especially in one particular character.  To be clear, I don’t object to swear words in fiction as such, and I am well aware that they are part of the “street language” characterizing the milieu in which this particular character moves.  However, if four letter words become the predominant means of expressing a given character’s utterances, emotions, and internal life and dialogue, I just get annoyed (and bored), and I start picking apart the writing instead of empathizing with the character (or even if failing to empathize, at least thinking about them and accepting them as someone who might actually exist in real life).  Ultimately, the only thing that kept me interested in the character in question here was the question which role, precisely, they played in the abuse scenario; i.e., why they mattered to the narrative at all.  (Which, ultimately, I almost missed, because at that point I had long started to tune out more and more frequently, my attention having been distracted by the novel’s unfocused narrative structure.)

So: By and large, a lot of unfulfilled or even downright wasted potential here.  This was an interesting reading experience on account of the book’s setting alone, but I can’t shake the impression that the combination of that setting and the (for editors, apparently irresistible) lure of a pronounced “literary” style of writing earned it its publication in a form, and at a moment, where the novel would still have benefited from substantial editorial guidance.