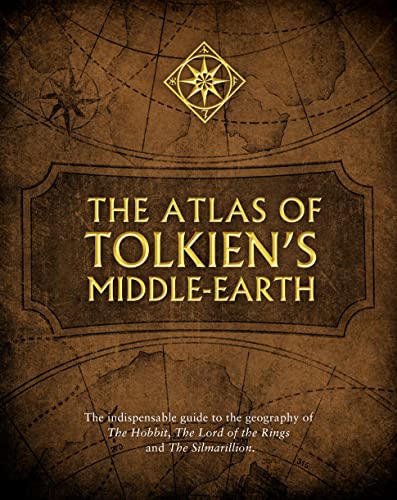 “Find your way through every part of J.R.R. Tolkien’s great creation, from the Middle-earth of The Hobbit and The Lord of the Rings to the undying lands of the West …

The Atlas of Tolkien’s Middle-earth is an essential guide to the geography of Middle-earth, from its founding in the Elder Days – as recounted in The Silmarillion — to the Third Age of The Lord of the Rings, including the journeys of Bilbo, Frodo and the Fellowship of the Ring.

Hundreds of maps and diagrams survey the journeys of the principal characters day by day – including all the battles and key locations of the First, Second and Third Ages. Plans and descriptions of castles, buildings and distinctive landforms accompany thematic maps describing climate, vegetation, languages and population throughout the history of Middle-earth.”

Overkill for anybody not expecting to read any of Tolkien’s Middle-earth books more than once, but highly informative supplementary reading for everybody else. Even if you have a rough (or not-so-rough) idea of the paths traveled by the Hobbits and the Fellowship, and how the Shire, Rivendell, Edoras, Gondor and Mordor (or, for that matter, the Mirkwood and the Lonely Mountain) are situated in relation to each other — and to Númenor and other lands from the earlier ages of Middle-earth –, you’ll very likely still find your reading experience enhanced by the detailed maps of individual locations and areas within Middle-earth; to say nothing of the maps tracking individual events and movements. I used to think “I don’t need this sort of thing” … now, I don’t want to do without it any longer. Highly recommended.

Blurb: Lord Pastern and Baggot is a classic English eccentric, given to passionate, peculiar enthusiasms. His latest: drumming in a jazz band. His wife is not amused, and even less so when her daughter falls hard for Carlos Rivera, the band’s sleazy accordion player. Aside from the young woman, nobody likes Rivera very much, so […]