John Steinbeck: The Winter of Our Discontent 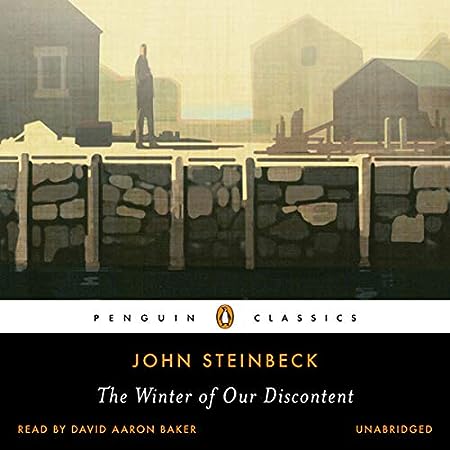 John Steinbeck’s final novel was one I had never gotten around to in my Steinbeck fangirl binges of yore — I knew it was reputed to be “bleak”, and after I’d seen what Steinbeck can do along those lines in The Grapes of Wrath (never mind that that actually is one of my favorite novels by him), I just couldn’t work up the nerve to go anywhere near bleakness, Steinbeck style, again anytime soon.  But of course it remained a nagging “to-do”; so here we are at last, all those years later.

I was surprised (and dare I say it, relieved) to find that the book actually opens on an almost serene note, never mind that this note is being sounded on Good Friday; with all the dual / opposing implications built right into the novel’s opening that way (and for those who’d otherwise miss it, Steinbeck even goes so far as to give us the etymology of the holiday’s name).  And the benign mood lasts longer — in terms of pages, even if not in terms of time passed in the novel — than I would have expected; Steinbeck really puts a lot of groundwork into establishing his protagonist Ethan Allen Hawley’s initial standing as his township’s one decent, honest and incorruptible citizen, all the while laying out the character of the town as such and its major denizens — and, once more, producing quotable lines by the dozen.  (I swear, one of these days I’m going to grab my entire Steinbeck library and copy half its contents into my collection of favorite quotes.)

Similarly, while both in terms of the novel’s timeline and in terms of Hawley’s inner life, the beginning of Hawley’s transformation is clearly definable, he goes about it in such a slow, methodical way that at times you almost want to doubt whether he really has changed his course after all; and there’s a moment right before the ending (for those who have read the book: the conversation in Baker’s office) where, even knowing everything that has made this moment possible, I still couldn’t stop myself from thinking, “good for you, Ethan.”  (That is, of course, before Hawley gets home on the evening of that same day.)

Taken all in all, this novel is everything that’s ever been said about it — a searing indictment of capitalism, exemplified not through Wall Street and large city corporations but seen through the focus of a small Long Island community (which looks benign only as long as you don’t know that it was founded by buccaneers), an indictment of the link between money and social standing (whoever said the U.S. were a classless society anyway?), an exploration of morality and personal values; and also, noticeably, once more an incredibly prescient piece of writing; from land and corporate ownership to honesty in academic settings and national contests, there is not one issue in this novel that hasn’t retained its relevance until the present day and hasn’t kept producing similar examples, over and over again, over the course of the decades since the novel’s publication.  Steinbeck’s final word on human society is a harsh one — and yet, the very last notes that it sounds are not without hope, and they do bring us around all the way back to the novel’s double-edged beginning after all.

4 thoughts on “John Steinbeck: The Winter of Our Discontent”