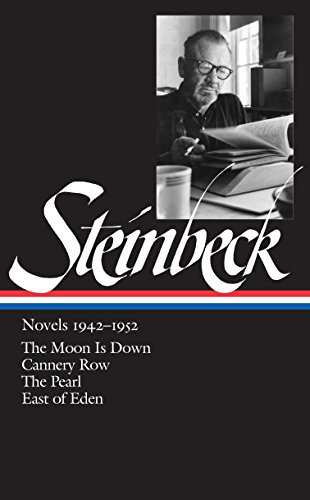 A Nobel Laureate’s Eden and
Our Many Faults and Failures

Whenever “the great American novel” comes up in conversation, the names most frequently bandied about are Fitzgerald (“The Great Gatsby”), Faulkner (“The Sound and the Fury”), Hemingway (“The Old Man and the Sea”) – and John Steinbeck, chronicler of rural California and the ordinary man’s plight, like Faulkner and Hemingway winner of both the Literature Nobel Prize (1962) and the Pulitzer (1940, for “The Grapes of Wrath”), in addition to multiple other distinctions.

Little in Steinbeck’s upbringing hinted at his future rise to fame. Born 1902, a modest Salinas, California, flour-mill-manager-turned-county-treasurer’s son, he worked as a farm-hand during high school and studied English and biology at Stanford, but left 1925 without graduating to pursue journalism and writing in New York; only to have to return home a year later. Surviving on a number of odd jobs, he continued to write. His first novel, 1929’s “A Cup of Gold,” however, failed to return his publisher’s $250 advance, and his subsequent collection of interrelated stories (“The Pastures of Heaven,” 1932) and novel (“To a God Unknown,” 1933) likewise remained largely unknown. Steinbeck’s fate changed with 1935’s humorous “Tortilla Flat,” chronicling life in a Chicano community (and an allegory on Steinbeck’s own first literary influence, the Arthurian legend, to which he returned much later in an unfinished attempt to modernize Mallory’s “Morte D’Arthur”). Both “Tortilla Flat” and the subsequent “In Dubious Battle” (1936) – Steinbeck’s first exploration of the California’s migratory workers’ fate – won the California Commonwealth Club’s Gold Medal; and the sale of “Tortilla Flat”‘s movie rights earned him his first truly big check. Steinbeck’s reputation grew further with the interrelated coming-of-age stories of “The Red Pony” (1937), and his next two novels, 1937’s poignant “Of Mice and Men” and, particularly, “The Grapes of Wrath” (1939), the story of angry “harvest gypsy” Tom Joad and his family. Both works are still among America’s 35 books most frequently banned from school curricula: keen testimony to the nerves they continue to touch.

Steinbeck’s major works are collected in four volumes of the Library of America series, the first covering his 1932 – 1937 writings, the second “The Grapes of Wrath,” Steinbeck’s extensive background research (“Harvest Gypsies,” 1936), the short story collection “The Long Valley” (1938) and his contribution to “The Sea of Cortez,” a 1941 publication about his 1940 marine exploration with close friend Ed Ricketts; and the final volume his last novels, written between 1947 and 1961, as well as the 1950 play-novelette “Burning Bright” and the travel narrative “Travels with Charley in Search of America” (1962). The present – third – volume contains his three major works from the 1940s, in addition to the awe-inspiring “East of Eden” (1952).

“The Moon Is Down” (1942) reflects Steinbeck’s impressions upon hearing the testimony of refugees from Nazi-occupied Europe. Originally conceived as a play set in the U.S. but revised as a novel set in an unnamed Scandinavian country, it describes the struggle of a group of underground fighters in an occupied society. Widely read in occupied Europe, in 1946 it won Norway’s King Haakon Liberty Cross.

“Cannery Row” (written 1944, published a year later) was a response to a group of soldiers’ request to Steinbeck to write “something funny that isn’t about war.” It is set in Monterey, California and revolves around Doc Burton, a literary incarnation of the author’s friend Ed Ricketts, first introduced as a supporting character in “In Dubious Battle” and now taking center stage as a man whose mind has “no horizon,” and his sympathy “no warp” and thus, becoming the center of a community of truly memorable, endearing characters. (The novel’s dedication reads: “For Ed Ricketts who knows why or should.”) – Steinbeck returned to Doc and his Monterey community in 1954’s “Sweet Thursday.”

“The Pearl,” the folklore-based story of a boy whose life is altered (not for the better) by the discovery of a precious pearl, began as a screenplay for a film directed by Mexican Emilio Fernandez. The novel’s publication was postponed to coincide with the movie’s early 1948 release; by this time the story had, however, already appeared in a magazine.

“East of Eden,” by far the longest work contained herein, was, according to Steinbeck himself, the major novel of his life: “I think there is only one book to a man,” he noted in a letter to his publisher. Of epic scope and breathtaking craftsmanship and complex characters, it is part chronicle of California’s early settlement history, part family saga and part tale of two unequal brothers’ rivalry, modeled on the bible’s Cain and Abel. Intending the book primarily for his sons, Steinbeck commented that it was like a box containing “[n]early everything I have … [p]ain and excitement … evil thoughts and good thoughts – the pleasure of design and some despair and the indescribable joy of creation.” The writing process was accompanied by a series of letters to Steinbeck’s publisher, published 1969 as “Journal of a Novel: The East of Eden Letters.”

In his remaining 16 years, Steinbeck published only three more works of fiction – besides “Sweet Thursday,” the satirical “Short Reign of Pippin IV” (1957) and 1961’s swan-song on materialism, “The Winter of Our Discontent.” (The uncompleted “Acts of King Arthur and His Noble Knights” was published posthumously.) His most popular later work is the journal of his trans-American road trip with his poodle Charley (“Travels With Charley,” 1962). But he remained a critical voice, released several collections of journalism and when he died, left a legacy also including a treasury of letters and two highly-acclaimed screenplays, for an adaptation of his own “Red Pony” and for 1952’s “Viva Zapata!” (starring Marlon Brando and Anthony Quinn), in addition to screen versions of his novels involving Hollywood luminaries from John Ford and Elia Kazan to Henry Fonda, James Dean, Spencer Tracy, Robert Mitchum and, more recently, Gary Sinise and John Malkovich.