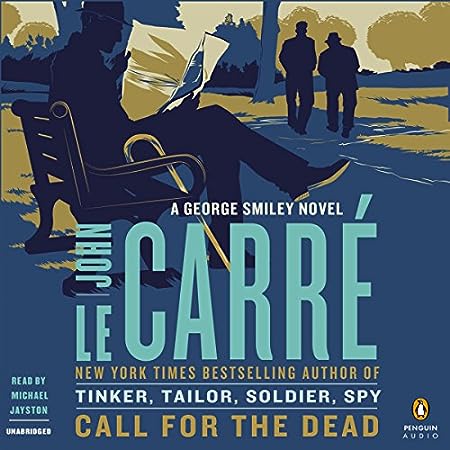 I discovered Le Carré as a teenager; not through any of his Smiley novels but through The Little Drummer Girl (his most recent book at the time), which, in the snobbery that characterizes the German literary scene to this very day, was characterized as a thriller and hence, “entertainment literature” (as opposed to “serious literature” — LitFic and the classics).  I decided then and there that distinctions like these were stupid — even I could tell that this was a book by an author intimately familiar not only with his subject (the Israeli / Palestinian conflict) but also, on a personal, face-to-face level, with the key real life players,* and every bit as deserving of close attention as a novel deemed “literary”, on those grounds as well as on the grounds of the statements it made on its chosen topic.

Over the years I became interested chiefly in Le Carré’s books dealing with the Cold War and its immediate aftermath; books such as the later installments of the Smiley cycle and The Russia House, which displayed not only his inside knowledge of the British Secret Service — which was a given (even Stella Rimington, understandably not a particular fan of his, grudgingly acknowledges in her autobiography that his portrayal, albeit not sympathetic, is accurate while managing not to betray any secrets, though on occasion he skirts the line) — but, more than anything else, these books showed his profound understanding of the German speaking world, including and in particular the issues associated with Germany’s Cold War divided status.  For one thing, it was clear that in his case, the ability to speak German on a near-mother tongue level was no mere matter of authorial self-promotion: any native speaker who has heard him speak German can attest to the literal truth of that statement, far above and beyond the level that a year at a Swiss university and a few years of intelligence service under diplomatic cover in Bonn would have produced (all the more since the foreign diplomats in Bonn tended not to mix with the local population — I’ve grown up in Bonn when the city was the West German capital and remember those years very well –; indeed, that “we’re a breed apart” attitude is jarringly obvious in A Small Town in Germany, which is incidentally also the one book apt to make you seriously doubt how well Le Carré understood Germany after all).  But novels such as The Spy Who Came in from the Cold, Tinker Tailor Soldier Spy, The Looking Glass War, and Smiley’s People showed an insight far deeper than that of the ordinary observer of German and Cold War politics (and make the serious conceptional bloopers of A Small Town in Germany even less understandable).

However, I to date I’ve never been particularly interested in George Smiley’s beginnings at “the Circus”.  So when I finally did read Call for the Dead after all, I came to it not as someone meeting Smiley for the first time but, rather, as an acquaintance from his Tinker Tailor and Smiley’s People days, catching up in a “so anyway, I never asked how …” fashion.  And I’m glad I finally did ask.  Not only is this hardly recognizable as a first novel from a craftsman’s point of view; Smiley’s character, too, is essentially there already, fully rounded (in more senses than one) and exactly the same person we will meet again later in Tinker Tailor and Smiley’s People — pudgy, curmudgeonly, an intellectual and a lover of ancient manuscripts, a man whom life seems to have passed by and left somewhere back in pre-WWII Oxbridge, in fact a most unlikely spy altogether (at least to anybody taking James Bond as their model: Smiley is Bond’s antithesis in every single respect), and unhappily caught in what is also one of the most unlikely marriages of literary history.  And it is actually with this marriage that the book opens, which I found rather gratifying, as this was one thing about Smiley’s character that I had always found somewhat puzzling — well, now I finally know how that came about, too.  In this first book, Le Carré does not yet venture outside of Britain as far as the core setting is concerned; but “the German theatre” already plays a major role in terms of background — and the recurring pattern of Smiley leaving “the Circus” only to be asked back in one constellation or another is already set as well.  The plot, which concerns the sudden death of an agent whom Smiley had been asked to “interview” (read: investigate) for his presumed communist leanings, is not yet anywhere near as complex as those of Le Carré’s later books, nor quite as convincing for that matter, but it hangs together as a consistent whole; and I was rather pleased to also meet Mendel already in this first book, who will be of such instrumental help to Smiley later on (particularly in Tinker Tailor Soldier Spy).

* And indeed he was; the story, e.g., how he got to meet Yassir Arafat, as told decades later in The Pigeon Tunnel, is a riveting adventure in and of itself and not something I’d necessarily have wanted to experience myself.