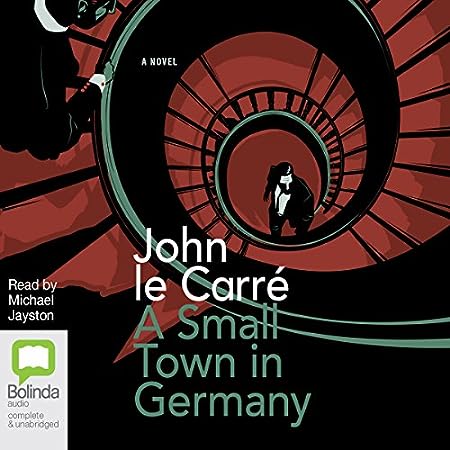 This book is seriously odd — and it cut very close to home not merely geographically but also in terms of my own political formation.  Le Carré first takes eons to trot out his personal disappointment with having been posted to Bonn instead of a “sexier” capital (via the voices of the British diplomats and spies populating his novel, of course, but it’s clear that this is himself speaking, hearkening back to his own time here), but by the time when the plot finally gets going — I was on the brink of a DNF at that point — it’s actually fairly decent.

The premise is off, though — the novel is based on the notion of a widespread movement in West Germany seeking to reunite Germany and join the Warsaw Pact and Comecon in lieu of NATO … in the early 1970s.  Now, if he’d set his novel in the late 1940s and in Berlin, that might actually have worked.  But for 1970s West Germany it’s sheer nonsense — despite the 1960s’ and 1970s’ student rebellion movement, the mood was so solidly pro-NATO and anti-Warsaw Pact in Germany at the time that Willy Brandt just barely survived a vote of no confidence (by a margin of a single vote) as a “reward” for merely seeking a deescalation with the Warsaw Pact.  I was still a child then, but the Brandt government is the first one I remember really well, and particularly so the dispute about the Warsaw and Moscow Treaties.  And people also knew that as long as both the Warsaw Pact and NATO existed, there was no realistic chance of reunification — nor would most West Germans at the time have wanted it at the price of leaving NATO.

So there’s no chance this side of hell that the path sought by “the Movement” in this book would have gained any traction, let alone widespread.  More likely, they’d have found themselves on the receiving end of domestic intelligence service attention in double quick time, for seeking to undermine West Germany’s constitutional order.  (Not because of their reunification demands — that was official West German policy from 1949 all the way to 1990, for however unlikely it may have seemed for the longest time — but for seeking reunification by “turning eastward”, which would have meant adopting, or at least being neutral towards communism.  And communism was considered a doctrine hostile to democracy, so anybody endorsing it outright, or coming very close to doing that, could be certain of attracting the attention of the security services — as was true not only in West Germany but in other western European countries as well.)

While reading this book, there were moments when I even felt reminded of Agatha Christie’s abysmal final full-fledged spy thriller, A Passenger to Frankfurt, which in turn made me wonder how Le Carré’s publisher could ever have accepted this book in the first place.  Obviously, the writing is still leagues better than that in Christie’s book (not that that takes a lot, but still), and perhaps Le Carré managed to bamboozle his publisher into trusting his “inside knowledge” as to the feasibility of it all.  Also, as this novel vividly demonstrates, not even all of the British diplomats living in Germany at the time (even those who spoke German) demonstrated much initiative in getting to know their host country, relying instead on a mix of pre- and post-WWII stereotypes.  (In fact, if this book did serve as an uncomfortable reminder of anything, it’s just how far relations between the two countries have genuinely improved … or had, until very recently.)  Still, this is such a far cry from The Spy Who Came in From the Cold, Tinker Tailor Soldier Spy, and Smiley’s People, that you’d almost swear it must be by a different author, if it weren’t for the presence of Le Carré’s tell-tale expressions and writerly gimmicks.

I will say, however, that the movement that Le Carré describes here is not only vehemently pro-Warsaw Pact but also (somewhat curiously) at the same time profoundly nationalist (and anti-“left” press), and slogans like “”Send the Foreign Workers Home!”, “Unite Germany First, Europe Second!” and “Democrats! Hang the Press Baron!” — as well as a speech the movement’s leader gives at the end of the book — strike a seriously spooky note when reading them right now.