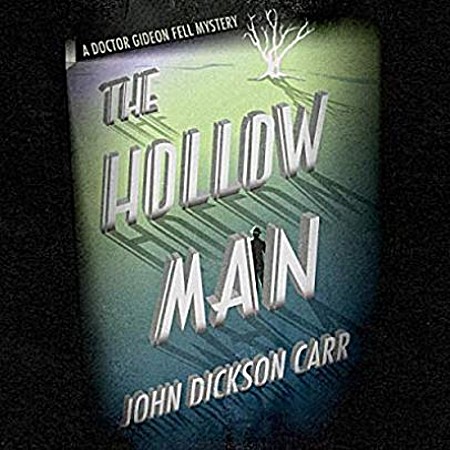 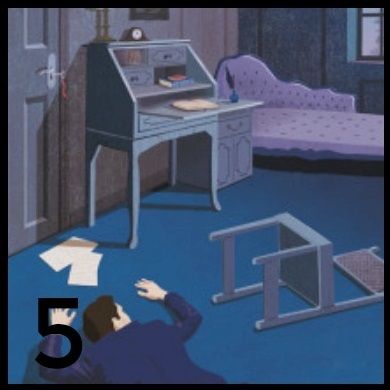 Seriously, this is the book where John Dickson Carr, the master of locked room mysteries, pulls out all the stops.  And he tells us as much right from the start:

“To the murder of Professor Grimaud, and later the equally incredible crime in Cagliostro Street, many fantastic tems could be applied — with reason.  Those of Dr Fell’s friends who like impossible situations will not find in his casebook any puzzle more baffling or more terrifying.  Thus: two murders were committed, in such a fashion that the murderer must not only have been invisible, but lighter than air.  According to the evidence, this person killed his first victim and literally disappeared.  Again according to the evidence, he killed his second victim in the middle of an empty sreet, with watchers at either end; yet not a soul saw him, and  no footprint appeared in the snow.”

The Hollow Man is a masterpiece in the art of the authorial sleight of hand — the solution rests on an extremely audacious scheme, and I dare any reader to best JDC’s series protagonist, Dr. Gideon Fell, in unraveling every element of the plot; never mind that the relevant clues actually are dropped throughout the novel.

Along the way, Dr. Fell also delivers his author’s now-famous lecture on the various types of locked room mysteries, either name-checking or alluding to pretty much every mystery master of the age who had contributed to this particular sub-genre in a meaningful way by the time this book was published; and to anybody who criticizes the sub-genre for resting on “improbable” solutions, he has this answer:

When the cry of ‘This-sort-of-thing-wouldn’t-happen!’ goes up, when you complain about half-faced fiends and hooded phantoms, and blond hypnotic sirens, you are merely saying, ‘I don’t like this sort of story.’  That’s fair enough.  If you  do not like it, you are howlingly right to say so.  But when you twist this matter of taste into a rule for judging the merit or even the probability of the story, you are merely saying, ‘This series of events couldn’t happen, because I shouldn’t enjoy it if it did.’ […]

You see, the effect is so magical that we somehow expect the cause to be magical also.  When we see that it isn’t wizardry, we call it tomfoolery.   Which is hardly fair play.  The last thing we should complain about with regard to the murderer is his erratic conduct.  The whole test is, can the thing be done?  If so, the question of whether it would be done does not enter into it.  A man escapes from a locked room — well?  Since apparently he has violated the laws of nature for our entertainment, then heaven knows he is entitled to violate the laws of Probable Behaviour!  If a man offers to stand on his head, we can hardly make the stipulation that he must keep his feet on the ground while he does it.  Bear that in mind, gents, when you judge.  Call the result uninteresting, if you like, or anything else that is a matter of personal taste.  But be very careful about making the nonsensical statement that it is improbable or farfetched.”

I happen to like locked room mysteries, yet I would argue that some crime writers’ solutions do rest on overly improbable sequences of events on occasion, to the detriment of my enjoyment in almost every instance.  I very much do agree with his larger point, however: Don’t mistake personal taste (an entirely subjective criterion) for “merit” or “quality” (a criterion aspiring, with however much or little justification, to objectivity).  This is not only lazy; it’s also been the very thing that has kept genre fiction on the sidelines of literary recognition practically ever since its emergence — the notion that it is somehow innately “inferior”, literarily speaking, to what is known today as “literary fiction,” or to the classics (which, dare one even mention it, were frequently belittled as “populist writing” themselves when first published, as Jane Austen powerfully reminds us in Northanger Abbey).

(Oh, and by the way, I also got a chuckle out of the fact that John Dickson Carr has absolutely no qualms about breaking the fourth wall, not only alluding to the reader at the very beginning of the book — “in this case the reader must be told at the outset, to avoid useless confusion, on whose evidence he can absolutely rely” — but even more so at the beginning of Dr. Fell’s above-mentioned lecture on locked room mysteries:

‘Because,’ said the doctor, frankly, ‘we’re in a detective story, and we don’t fool the reader by pretending we’re not. Let’s not invent elaborate excuses to drag in a discussion of detective stories.  Let’s candidly glory in the noblest pursuits possible to characters in a book.'”

If that isn’t audacity, I don’t know what is.)

That all being said, if I’m not all the way “five-star” wowed by this book, it’s because its focus rests almost entirely on the unraveling of the two fiendishly clever puzzles surrounding the murders committed, with comparatively little focus on the people involved in those murders, e.g., Dr. Grimaud’s household.  It’s not that we don’t meet them or that their characterization necessarily lacks depth, but we only ever see them from the perspective of the investigators, with whom the narrative point of view rests all the time, and I’m finding more and more that this is a narrative technique that doesn’t work optimally for me, or at least not unless the narrative perspective is that of the Great Detective’s sidekick (and even Agatha Christie and Arthur Conan Doyle, the progenitors of that particular technique, abandoned it every so often; ACD to tell the odd story from Holmes’s perspective, or as a narrative within the narrative told from a client’s or a witness’s — or the murderer’s — point of view; Christie by ultimately sending Captain Hastings to “the Argentine,” so as to compel Poirot to strike out on his own henceforth and allow for a different, more widely spread narrative perspective; and even in a “Poirot and Hastings” novel, The A.B.C. Murders, she expressly included chapters told from another person’s perspective, such as later obtained by Captain Hastings).

Moreover, there is rather a sinister and thrilling backstory to the events in The Hollow Man, which is however merely treated as precisely this — a backstory.  I suppose John Dickson Carr didn’t want to be accused of crossing too far into the territory of the occult and the supernatural (though he arguably does in novels such as The Burning Court and The Plague Court Murders), but even with the facts given as they are, I would have loved to see the backstory played out in more detail … or at least, been given greater room in the exploration of the crime.

In short, John Dickson Carr’s writing here, while technically brilliant, lacks the emotional dimension (or emotional appeal) that would take it for me to be drawn in all the way to five-star level.  This surely won’t remain the last book by him that I have read, however.

In terms of the Detection Club bingo, this would obviously qualify for the Miraculous Murders square / chapter, which I’ve already covered — but I’ll definitely be counting it as an additional read for that square.

One thought on “John Dickson Carr: The Hollow Man”