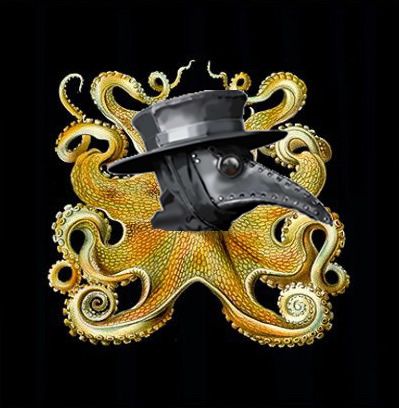 In substance, I don’t really have a whole lot to add to my one ill-humored status update on this book.  This is the book-form equivalent of a cross-breed between tabloid journalism and a series of superficial, but opinionated and self-centered blog posts: short on bonafide science, history, and research generally; long on sweeping, generalizing judgments, inappropriately flippant tone, ill-matched pop culture references, character assassination, vagueness and imprecision, the sensational aspects of the diseases treated, and the personal histories of some of the protagonists of the episodes chosen for presentation (clearly not all of them selected for their “heroic” attributes but for their “human interest” and sensationalist appeal).  Several of the chapters do not deal with genuine epidemics (never mind “plagues”) at all: the “dancing plague” was arguably collective hysteria, encephalitis lethargica doesn’t qualify on either overall numeric or “sudden mass occurrence” grounds, and if Wright’s grounds for including lobotomies seriously were (as she writes) that you can’t possibly leave a gruesome procedure such as this out of a book on “medical horrors,” then that statement alone shows what she was truly after; never mind her book’s extremely misleading subtitle.  Most of all, however, Get Well Soon is extremely long on MeMeMe: the book’s true protagonist is not in any way, shape or form any of the brave, poor, heroic, stupid, bright, unfortunate and other souls remembered for their accidental, unwilling or deliberate involvement in one epidemic or another, but the author herself, who clearly considers herself God’s gift to popular science writing.

Well, no, Jennifer.  You’re not.  And contrary to what you seem to be hoping, history won’t remember you, either.  Not even because you’ve written a book.  Because this just isn’t the sort of book that either scientific or general literary history will remember.  Not even because it’s taking a scientific position that will be shown off as outrageous in the near or far removed future.  It’s just a run-of-the-mill, subpar, badly-researched tract that would be (and, as the books you cite show, has in fact been) in better and more competent hands with just about any writer who, unlike you, actually understands what they’re talking about.

To the above comments, I will add only one thing that began to bug me (no pun intended) progressively more after I’d posted my only status update:

Wright’s view is extremely Anglo-centric: in a book that makes so much out of the benefits reaped by humanity at large from the medical and scientific advances of the late 19th and the 20th century, and a book that purports to deal with, inter alia, cholera and tuberculosis, you’d expect scientists such as Louis Pasteur and Robert Koch and their research to be given fairly big play, but Wright has either never heard of them at all or is completely unaware of their immense contributions to the diagnosis and treatment of the very diseases she writes about, including in the areas she trumpets over and over again: disinfection / sterilization, sanitation, and vaccination (which contributions to science and medicine justly earned both of them the scientific community’s highest honors — Pasteur was, inter alia, a member of the Académie Française and the Académie des Sciences, and gave his name to the Institut Pasteur and the procedure known as “pasteurization”; Koch was awarded the Nobel Prize for Medicine).  Even more than that, however, Wright’s world is divided into “core countries” and “periphery countries” — which seems to translate vaguely into “the North American and Western European parts of the industrialized world” and “all the rest.”  If that isn’t outright racism — and not of the casual sort, either — I don’t know what racism is.

Wright is adamant enough about the importance of vaccination and disinfection / sterilization / sanitation for me to give her the benefit of the doubt that she really is passionate about these subjects — and about the importance of science and scientific research generally.  On those grounds, and those alone, and in light of the undeniable importance of these topics (not only in connection with the current anti-vax idiocy), I’m willing to award her books two stars.  But that doesn’t stop me from wondering who at Henry Holt (of all places) thought this book would be a good idea in the first place, and where they hid both their science editors and their general editors before they let it go to print.

(1)  “Lone genius” or not, I learned more about Edward Jenner and his research from my 5th and 6th grade English language textbook — i.e., from a book whose primary purpose was not to teach science, but to teach English to nine- and ten-year-olds who were just starting to learn the language from scratch, and who were in the very first stages of building a very basic English vocabulary.

(2)  I happen to know one of the authors Wright cites.  He is a friend of my mother’s and, when in Germany, always makes sure to spend some time with my mom / with us.  On one of those occasions, we took a trip to Speyer, which is some 2 – 2 1/2 hours south of Bonn (near the Luxembourg and French borders), has a certain significance in the history of Germany, and was founded, like many cities in the southwest of Germany, by the Romans.  Not surprisingly, it therefore has a museum dedicated to its Roman history, which the three of us decided to visit.  Having perused the museum’s exhibits, we afterwards proceeded to discuss the decline and fall of the Roman empire and my mom asked her friend what he considered the key causes of Rome’s eventual downfall.  Now, that was a very apt question not merely on general grounds in light of our just-concluded museum visit but more specifically because her scientist friend had published, a few years earlier, a book on the collapse of certain civilizations (including some highly advanced ones), and even before that, a book that deals with the way in which [resistance to] epidemics, warfare and technological advances combined have historically favored the descendants of the inhabitants of the Fertile Crescent over the indigenous inhabitants of other parts of the world (say, the Americas) (this, incidentally, is the book that Wright cites in Get Well Soon).  So you could say that he knows his stuff.  And you’d think that if a scientist who had researched, in depth, these specific aspects of scientific, medical, geographical and social history, were to consider the Antonine Plague even remotely among the things that brought to an end a millennium’s worth of Roman history, he’d say so, right?  Well, guess what was the one thing he did not consider worth mentioning at all?  (Spoiler alert: yes — the Antonine Plague.)