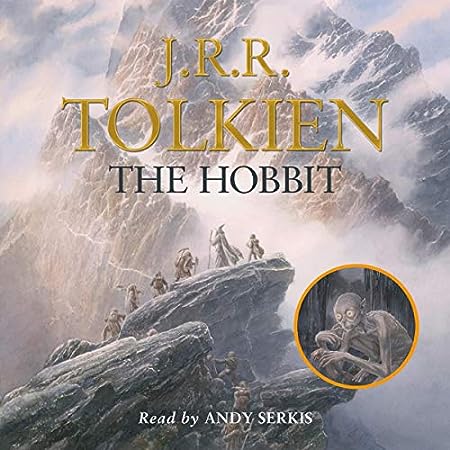 Like its magnificent sequel, The Hobbit is, I think, many things to many people: the first exposition of the universe that would become Middle-earth; prelude to The Lord of the Rings; a bite-sized visit to Middle-earth whenever you don’t feel up to the full blow of the War of the Ring(s); one of the most enchanting pieces of YA writing in existence … and, oh yeah, the book that was blown up into a three-part movie extravaganza by Peter Jackson ten years after the Lord of the Rings trilogy, incorporating bits of the Middle-earth backstory of the first years of Sauron’s return and putting Jackson’s spin on the Lord of the Rings annexes, the History of Middle-earth, the Unfinished Tales, and the Silmarillion, all rolled into one.

(Quick side note: As I’m typing this, in the background Classic FM is playing a track from the movie score of The Fellowship of the Ring … how serendipitous is that?!)

Much like in his performance of the three parts of The Lord of the Rings, here, too, Andy Serkis somehow manages to give us a blend of all that The Hobbit is, or can conceivably be: we get Tolkien’s book, but we also get shades of the movies — less pronouncedly so as in the the Lord of the Rings audiobook trilogy, as in the case of The Hobbit, the movies add to Tolkien’s text instead of, like in the other book’s case, reducing it to its core elements (minus Tom Bombadil and the Old Forest); or put differently, Tolkien himself does not flesh out all of the characters in The Hobbit, in dialogue or otherwise, to the same extent as do the movie adaptations — but most importantly, we get all the charm of Tolkien’s own tale, and Mr. Serkis’s narration equally conveys its original character and its partial modification after the publication of The Lord of the Rings.

Again, he achieves this by his vocal performance alone: We start out with what is clearly a YA, or even a children’s book, much reminiscent in tone of Tolkien’s Letters from Father Christmas, which he had started to write to his children almost two decades earlier, in 1920; complete with his unique way of breaking the fourth wall (“I’m sure you’ll have guessed this long ago”, “where he came from / how this happened I’m sure I don’t know”, etc.); and in intonation Serkis could be reading the Father Christmas Letters just as easily as The Hobbit at this point.

But as soon as the story moves into adventure mode, his voice shifts into that of a storyteller not mainly addressing a very young audience; and of course, to the lovers of the movies, Gandalf’s voice is already (or still?) that from The Lord of the Rings, Thranduil (here known only as the Elvenking of Mirkwood) has a similarly melodious, though minutely darker (it seemed to me) baritone voice as his son Legolas, and Glóin has the same Welsh accent and a similarly rough voice as his son Gimli. In fact, most of the dwarves have some sort of pronounced accent, reflective of the fact that however ancient, noble and fierce a people they may be, and however high of birth within their own society, they are more “earthbound” (in every respect) than, say, the elves and the wizards. Even Thorin Oakenshield, whom Richard Armitage gives only a finely-nuanced shade of “something-not-quite-standard-English” in the movies — striking a balance between the fact that he is a dwarf, but he is also royalty — is removed from “standard pronunciation” to somewhere much closer to the vicinity of Manchester in this audio recording: I’d be tempted to suspect Andy Serkis of channelling the Armintage incarnation of Mr. Thornton from the TV adaptation of Elizabeth Gaskell’s North and South, if I weren’t convinced that Mr. Serkis doesn’t need to channel anybody … so I took it as a compromise of his own, given that Thorin is one of the few dwarf characters whom we hear speaking more than just briefly and occasionally in Tolkien’s book, which makes him not merely a character with his own individual traits but also a spokesman, in all senses of the word, for his fellow dwarves. — Bilbo’s voice here, like that of Frodo in The Lord of the Rings, is just a shade darker than Martin Freeman’s is in the movies, which serves me just as well and for essentially the same reasons.

Obviously, an actor as versatile as Andy Serkis, and who moreover has voiced everybody from the Witch King of Angmar to orcs and uruks in The Lord of the Rings, has all the fun in the world with the trolls and goblins in The Hobbit; he gives Benedict Cumberbatch’s Smaug a fair run for his money once we finally get to the Lonely Mountain — and, in the few moments devoted to the Master of Lake-town in Tolkien’s book, he manages to encapsulate that man’s utter foppish and greedy ridiculousness easily as perfectly as Stephen Fry, who is given much greater room to convey the same effect in the movies.

Gollum, finally, is, again, the Gollum we first met in the screen version of the Lord of the Rings trilogy; a creature entirely Andy Serkis’s own, still pitch-perfect two decades after the original performance; and never have I heard a rendition of his meeting with Bilbo down by his lake under the Misty Mountains that so fully reflects every single element of that encounter — the sheer dread experienced by Bilbo (and by the reader on his behalf), Gollum’s mix of greed, initial curiosity and growing anger and frustration … and the fact that, for all that, this is a scene not set in the context of an epic high fantasy opus such as The Lord of the Rings, but in a book originally written for a juvenile audience, as Tolkien’s own narrative voice makes clear here again at every turn.

To me, The Hobbit may not have the same overwhelming emotional impact as The Lord of the Rings, but I love it to pieces for its own charm and manifold intrinsic merits, as well as for being the book that started J.R.R. Tolkien and his billions of readers all over the world on their journey to Middle-earth. Andy Serkis’s idea of choosing it as his personal contribution to COVID relief was nothing short of brilliant, and I am beyond happy to see his performance perpetuated in audiobook form — I’m pretty sure I will be revisiting this recording about as frequently as Mr. Serkis’s rendition of the story of Frodo and the Fellowship.

9 thoughts on “J.R.R. Tolkien: The Hobbit – Performed by Andy Serkis”

Blurb: Lord Pastern and Baggot is a classic English eccentric, given to passionate, peculiar enthusiasms. His latest: drumming in a jazz band. His wife is not amused, and even less so when her daughter falls hard for Carlos Rivera, the band’s sleazy accordion player. Aside from the young woman, nobody likes Rivera very much, so […]