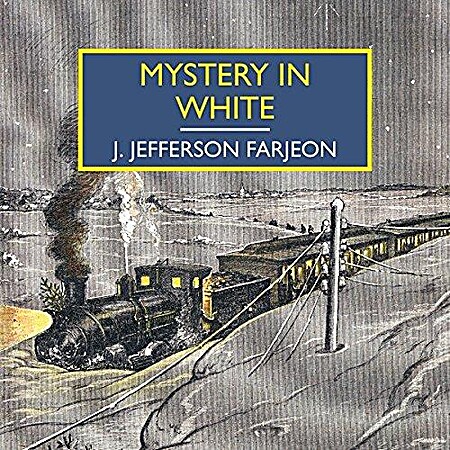 Book themes for Saint Lucia’s Day: Read a book set in Scandinavia (Denmark, Norway, Iceland, Sweden – and Finland for the purposes of this game) or a book where ice and snow are an important feature.

A snowstorm stopping a train mid-route and characters struggling through a blindingly white wilderness, seeking to regain civilization (and possibly even a way to continue their journey) until they come upon a seemingly deserted country house?  I’ll say that counts as a book where ice and snow are an important feature …

This book’s setup is so similar to a 1949 short story by Nicholas Blake (aka Cecil Day-Lewis) included in the British Library’s & Martin Edwards’s crime classics anthology Silent Nights — even the title of that short story, A Problem in White, is almost identical, and the cover image of this novel would actually illustrate the short story even better than the novel — that if it hadn’t been for the different authors, and for the fact that the novel was published 12 years prior to the short story (i.e., in 1937), I’d have suspected their creator of doing a Dame Agatha on us and expanding on a motif already used successfully in a short story previously.  As it is, I can’t help but wonder to what extent Blake was, um, inspired by this novel … considering, not least and in addition to all the above-mentioned things, that not only do all of the main characters that we initially meet also share the same train compartment; they’re even referred to descriptively instead of by names initially, owing to the fact that they are strangers to each other at the beginning of the story (“the old bore”, etc.).  Both of these features are, again, key to Blake’s short story and Farjeon’s novel alike, to the point that, having read the short story not long before I started reading the novel, I literally did a double take.

Be that as it may, though, I admit that a real sense of wariness set in when our characters — among them, a known psychic — left the train in search of civilization and stumbled upon the seemingly empty house, because for a moment it looked like we were now going to move into a haunted house setting: not my absolutely all-time favorite sort of story at all, particularly not in a book billed as a mystery.  But beyond a general sense of unease due to the general setup (winter, near-impenetrable and ever-increasing heaps of snow, isolated setting of the house, etc.) and due to the fact that the house seemed to have been deserted under rather curious circumstances, Farjeon wisely left the supernatural bits in his desk drawer, and the book instantly regained my favor. It took a bit to get to the “actual” mystery (and crime) to be solved, with plenty of diversions along the way, but the writing was strong enough — and the characters were enjoyable enough — for me to happily come along for the ride until the very end.

As with (almost) all the British Library Crime Classics reissues that were part of my holiday reading this year, I own both a phyiscal print edition and the recently-published audio version, which in the case of this book was expertly and engagingly read by Patience Tomlinson.

One thought on “J. Jefferson Farjeon: Mystery in White”